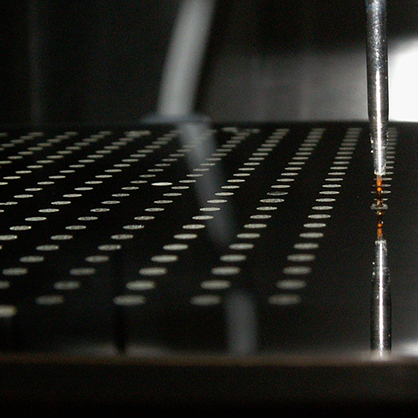 The Probot workstation is a fraction collector that interfaces liquid chromatography with MALDI mass spectrometry. The Probot workstation is in-line coupled to nano-flow liquid chromatography. It automatically mixes the LC-fractions with matrix and spots them onto a MALDI plate. Typically an RP-LC separation of tryptic peptides from a complex protein mixture is fractionated and spotted into 400-800 fractions of 75 nL each that are pre-mixed with 300 nL of matrix. In a 2-dimensional peptide separation (SCX and RP-LC) we can fractionate the peptite mixture into 1600 fractions onto two MALDI plates.