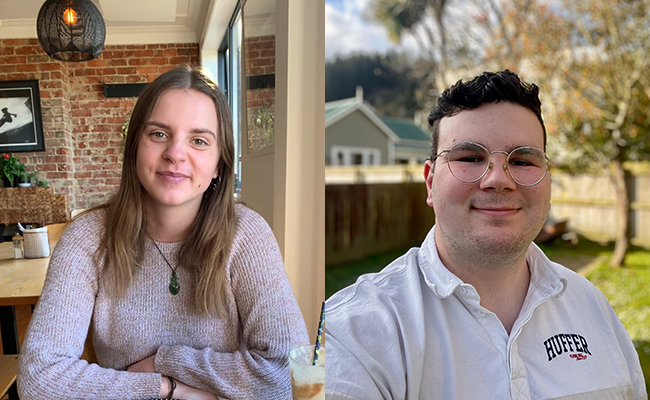 Recipients of Neurological Foundation Summer Studentships are, Maggie Hames, on the left, and Zachary Adamson.

Taking a much closer look at what makes brains tick – or not tick so well anymore – will be the focus of two Otago University students awarded Summer Studentships from the Neurological Foundation.

Neuroscience and Psychology student Maggie Hames and Medical student Zachary Adamson have each received a stipend to undertake research over the summer.

The Neurological Foundation funds various research projects that expand our understanding of the brain and nervous system, with a view towards developing prevention, treatment and cures for neurological conditions.

Their summer studentships are an opportunity to develop students’ research skills and experience.

Zachary will be looking at Parkinson’s disease in the Neurodegenerative and Lysosomal Diseases Laboratory, led by Associate Professor Stephanie Hughes within the Department of Biochemistry.

The project will focus on dopaminergic neurons and cortical neurons.

In Parkinson’s dopaminergic neurons degenerate first, causing the spasms and shaking. As the degeneration progresses, the cortical neurons in the brain can also become affected.

The research will consider why the cortical neurons do not degenerate until later, and whether they may contain some protective element that could potentially be used as a treatment to stop Parkinson’s getting worse.

There is no cure for Parkinson’s disease at present, only medication for symptom prevention.

“Currently the disease just goes and goes and eventually, the medications can’t help anymore because they start having toxic effects due to high dosage,” Zachary says.

This will be his second summer studentship at the University, the other completed with the Pathology department while undertaking his Biomedical Sciences degree.

He says his previous studentship “formed the starting blocks” for the research he is doing this summer.

“Last summer I looked at cancer cells, which just grow. This time I wanted to build on that and look at stem cell development.”

Zachary saw this studentship as an opportunity to prepare for the neuroscience component of his Bachelor of Medicine and Surgery course, which starts next year.

He is most looking forward to “hopefully finding something cool”.

“In a summer studentship, you can’t expect to have major results, but even if I can find anything that might show what our initial hope was, that there’s something early in development that separates dopaminergic from cortical neurons, I think that would be really cool, it would be a major thing in itself.”

Maggie will research alternative mechanisms for the development of Alzheimer’s disease, in Peter Jones’ laboratory.

She will look at calcium signalling in the brain, which she says is “really important for memory and learning”.

“There is a hypothesis that calcium signalling becomes impaired in people with Alzheimer’s disease and it is backed up that the further you get into the disease, the more messed up it becomes.

“With Alzheimer’s, we’re thinking that the receptors that release that calcium are not functioning correctly.”

Maggie says her project is “one part of a very big puzzle” that is the wider research being undertaken in Peter Jones’ laboratory.

She says she first became interested in neuroscience in Year 9 when neuroscience educator Nathan Mikaere Wallace gave a presentation to her class about the development of the teenage brain.

“I thought it was amazing. He explained it in a way that made sense. I loved the idea that you could trace all these things happening back to what is actually happening in your brain.”

She has always had an interest in dementia because of its relevance in Aotearoa’s aging population and because her grandfather was affected by vascular dementia.

Both research projects will commence this month and end in February, 2023.