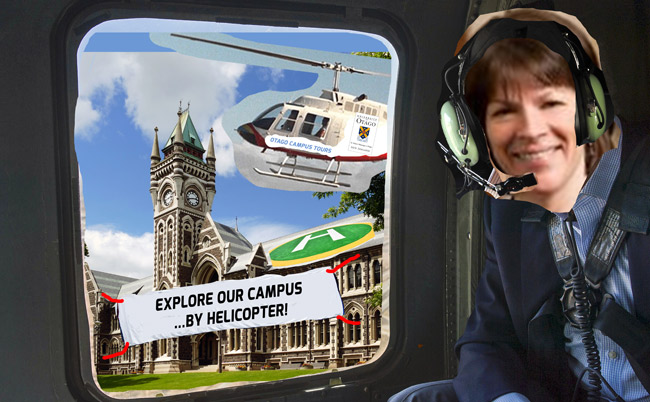 The University is excited to announce the launch of campus helicopter tours, under the capable captaincy of Vice-Chancellor Professor Harlene Hayne.

One would imagine the immediate response to this headline would be to reject this information outright and file it under ‘fake news’.

However the headline is also accompanied by an image (albeit an explicitly manipulated one) supporting the headline, and—as time passes—these extra pieces of visual information could result in people coming to falsely believe the headline’s claims.

It is this intersection between photography and memory that is at the centre of Psychology doctoral candidate Andrew Mills’ research. 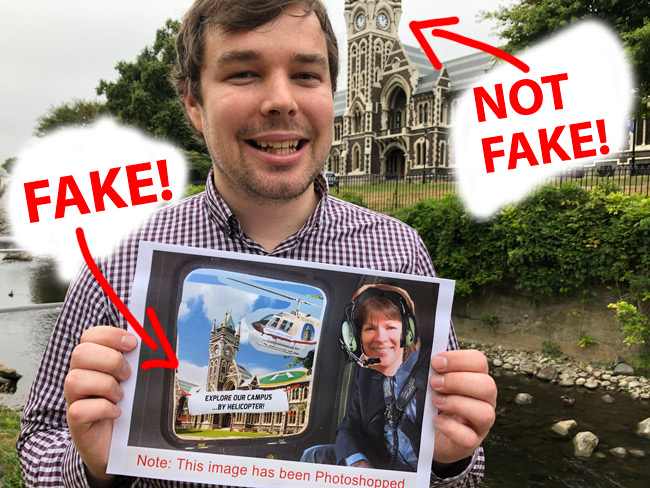 Psychology PhD candidate Andrew Mills holds an image announcing the launch of campus helicopter tours. His research suggests most people will recognise this as ‘fake news’ straight away (it is April 1 after all), but a week later the response may change.

“Every day we’re bombarded with photos and images from all kinds of places,” Mills says. “We know that looking at photos can help us to reconstruct our memories, but could it also create false ones?”

Mills’ research builds on previous work showing that when individuals see a photo supposedly from their past containing a childhood version of themselves photo-shopped into it, they can be led to believe it actually happened.

"The hardest bit was creating the fake news headlines. I had to do a lot of Googling to make sure none of these ridiculous events had actually happened. In some cases they had!"

His research aims to see if a similar effect plays out when these photos are heavily manipulated and explicitly fake, and are even labelled as such.

To achieve this, Mills created a series of real and fake headlines—from the arson of blossoming cherry trees to a worldwide shortage of vinegar—and illustrated some of these headlines with heavily (and badly) manipulated images.

“The hardest bit was creating the fake news headlines. I had to do a lot of Googling to make sure none of these ridiculous events had actually happened. In some cases they had!”

Immediately after being exposed to the headlines, the online participants could largely recognise which were real and which were fake.

However, a week later, the same participants were presented with the headlines only. They were asked how likely it was that the events did happen, and how well they remember them happening. And their responses were alarming.

“There was a small but significant increase in belief that the fake events had actually happened. In effect, false memories had been created by the passing of time,” Mills says. “But what was particularly concerning was that the effect was larger if there had been an accompanying image.”

"Over time, though, it looks as though our brains can jettison the photoshopping part and just keep the information, making it more likely that we’ll remember it as true."

Mills says we gather information from many different sources to create narratives and memories, and it is the “slotting together” of these pieces of information that can result in the formation of false memories, especially when we forget which information came from where.

Mills’ supervisor Associate Professor Rachel Zajac says the images used in this study were so badly photoshopped that all but a couple of participants could immediately spot that they were fake.

“Over time, though, it looks as though our brains can jettison the photoshopping part and just keep the information, making it more likely that we’ll remember it as true,” she says.

Mills’ research has numerous practical implications for social media and internet use, underscoring the importance of trying to halt the sharing of fake news items.

Undertaking this research has even changed how he personally interacts with online news headlines.

“I’m now very aware of the power of images on memory, so I’m far more cautious about what I’m casually scrolling past in my newsfeed.”

So, when you read the paper today, Associate Professor Zajac has a message for you: “We all feel smug when we can detect which ODT news story on 1 April is fake, but Andrew’s research shows that’s only half the battle.”