The psychology of COVID-19 conspiracies 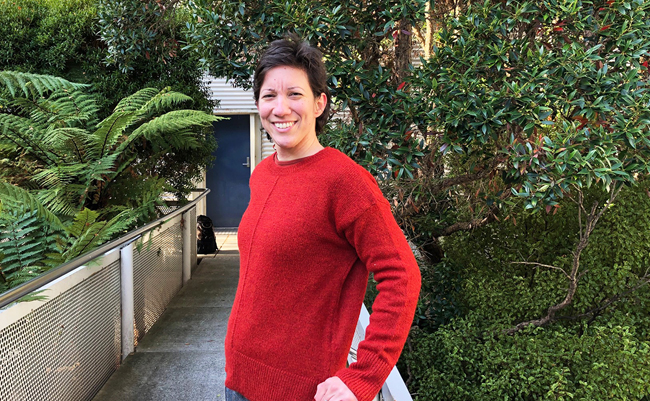 During the global COVID-19 pandemic it has seemed like headlines including words such as conspiracy theories and fake news have appeared more regularly.

The pandemic was, in many ways, timely for Department of Psychology PhD candidate Ana Stojanov who had just handed in her thesis on conspiracy theory beliefs.

And even though the pandemic itself wasn’t part of her research, the findings could be directly applied to what we are now observing as she outlines in an opinion piece published this week on Newsroom.co.nz.

The Communications Adviser for the Division of Sciences Guy Frederick caught up with Ana to learn more about what’s driving conspiracy theories right now, how this is connected to tornadoes in the United States, and how the Macedonian-raised researcher ended up at Otago.

Tell me a little about your research?

My research explored how feelings of lack of control contribute to people believing in conspiracy theories. It involved experimental research in a lab but given it’s really hard to elicit a feeling of lack of control in an artificial setting, there was no strong effect. So I turned my attention to naturalistic studies, and used a series of tornadoes that occurred in the United States last year to examine the rise of conspiracy theories. We looked at the conspiracy beliefs of people during the tornados and again three months later and we saw that after the tornado season people weren’t as likely to believe in weather-related conspiracy theories as they had been previously, but they believed equally strongly in other, weather-unrelated conspiracy theories. What this suggests is that when events happen which are out of one’s control, people are especially attracted to conspiracy beliefs relevant to the control-threatening event.

How is this related to the current pandemic?

When people are thrown out of their comfort zone and feel a loss of control that comes with unexpected events like the pandemic, they search for explanation and meaning. What we are seeing is a proliferation of pandemic-related conspiracy theories, so it seems it is related to our sense-making processes and need to re-establish control over our lives. We need to understand what’s going on and sometimes any explanation is better than none.

How can your research outcomes be applied?

Although we did not directly look at the effects of empowerment on conspiracy belief, it seems reasonable to assume that if lack of control leads to conspiracy beliefs, empowerment may serve as a buffer. Preliminary results of another study, not included in the thesis, look at how lack of personal control interacts with other sources of control, so even if individuals feel a lack of control but believe that, for example, a government or religious institution is strong and is supplying the structure, order and support they require, then they may be less likely to believe in conspiracy theories. In this sense it seems like New Zealand did a pretty good job of responding to COVID-19 compared with my home country Macedonia.

What was it that drew you to research conspiracy beliefs?

When I was an undergraduate in Macedonia, I was active in the local astronomical society. I became interested in the conspiracies around the moon landing and how people would believe that sort of thing. Prior to that I spent my last year of high school in the United States as an exchange student and took a sociology paper. The teacher was amazing and showed us lots of really interesting social observation experiments which drew me to psychology.

So how did you end up in New Zealand?

After completing my undergraduate degree, I completed a Master’s in Psychology and Education at Cambridge. I really valued the education system and as New Zealand seemed so ‘exotic’ we looked into the options and were drawn to Otago.

How has your time in New Zealand been?

To be given the opportunity to just create science has been amazing. Some of my research has been published so it’s really nice to be able to contribute to science and even call myself a scientist! New Zealand really is a paradise to live in, with the lifestyle and all the stunning nature. It is hard to be away from family and our systems of social support so we are mostly on our own, but I would never change this experience. Fortunately for me the lockdown was a positive time, as it meant I could spend lots of time with our two primary school children as I have been so busy with my research over the last few years. My husband has a job at Te Whare Tāwharau and now we would love to stay.