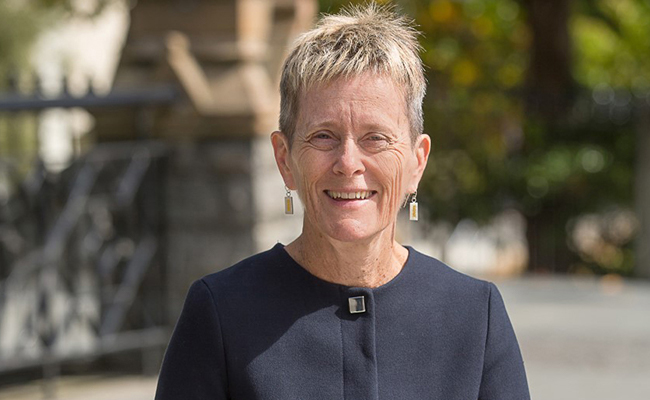 Professor Janice Murray is retiring after 30 years at the University of Otago.

Professor Janice Murray describes the preparation of her recent Inaugural Professorial Lecture as a “retrospective reflective” experience, given the lecture also coincided with her imminent retirement this week.

“As a result of the SSR process, there was a real fear the institution had lost collegiality and the ability to pitch in together to make things happen but what I experienced last year was remarkable.”

Preparing for the talk involved spending a wet Sunday afternoon surrounded by published papers scattered on the living room floor, revisiting episodes of her life, and people who had played key roles in those experiences.

The process helped Janice decide on “her story” which settled on overlaying the paths of her personal and professional lives, that serendipitously began with her early infant-related cognitive psychology work which over time morphed into research related to older adults.

Canada was Janice’s birthplace but after returning to Canada following two years as a postdoc at Auckland University, she had decided that New Zealand would be her “home of choice”.

From a phone box perched on a cliff overlooking the Atlantic Ocean she returned a call from Otago in which she was offered a lectureship, so her desire to return to these motu (islands) came to fruition in that moment.

With the confidence to know this would be long-term commitment, Janice and her young family returned in 1991 to take up a Lecturer position in the Department of Psychology.

Born and raised in a university town in Nova Scotia, Janice’s upbringing was surrounded by music theatre and science, while supported by a family who instilled values of fairness, generosity, and the importance of following one’s true path.

Her early work in infant speech perception, and how infants make sense of all the new information they are bombarded with, began with the teaching of late psychology leader Professor Peter Jusczyk who lit the path for Janice to discover her research interests.

“Peter brought tremendous enthusiasm and intellect to everything he did. He introduced me to the area of language acquisition research and infant speech perception which almost at once filled me with fascination, challenge and intrigue,” Janice explains.

“He treated me so well and afforded me so many opportunities and privileges as an undergraduate student. I remain grateful for that, and it’s always been important for me to continue that tradition in my own engagement with students. That influence is also reflected in my choice of service and leadership roles.”

Her research in object and face recognition, and visual attention expanded over time into age-related changes in emotional expression recognition (exploring a range of basic human emotions such as surprise, happiness, anger and fear) in which she used experimental psychology to advance knowledge in the area.

Applications of the collaborative research on social understanding in older adults have included the ability to pick up subtle cues for assessing socially inappropriate behaviour, differentiating truth from lies, and other emotion-based changes in social understanding that accompany aging.

Janice’s contributions have not just been isolated to research, but also through her senior leadership roles. She has also held key roles in the Division of Sciences as Associate Dean (Academic) since 2013, and Deputy Pro-Vice-Chancellor since 2017. This involvement has meant membership in a staggering number of committees, boards and working groups, including 20 in the Division of Sciences and an additional 30 across the wider University.

Janice believes the value of involvement with these groups is their common fundamental focus on developing and providing the best academic programmes and qualifications (including the newly introduced Bachelor of Commerce and Science and Bachelor of Arts and Commerce degrees) possible to students who choose to study at Otago.

Professor Richard Barker says when he started the role as Sciences Pro-Vice-Chancellor it came with a high and complex workload, and he has been very grateful to Janice through this time for the support she has provided.

When Janice was asked of an Otago experience that has made a lasting impression, she says almost ironically it’s a reflection of the University’s recent response to the challenging COVID-19 environment.

“As a result of the SSR process, there was a real fear the institution had lost collegiality and the ability to pitch in together to make things happen but what I experienced last year was remarkable.”

Janice retains the greatest respect for many unsung heroes who worked tirelessly over the time to ensure students continued to receive quality teaching, and she was heartened to see academic and professional staff work together for the common good.

Janice’s home Department of Psychology is located in the William James Building, named after the American philosopher, historian, and first educator to offer a psychology course in the United States.

When the building was completed in 2010, Janice and Professor David Bilkey were asked to choose a quote to be permanently mounted in the foyer.

Janice describes the process of hunting for a long time through William James’s wonderful writings before they settled on the following:

“Where is it, this present? It has melted in our grasp, fled ere we could touch, gone in the instant of becoming," William James from Principles of Psychology, 1890.

“The words resonated as they reflected the interplay between experience and memory, a research strength of the Psychology Department.”

Janice adds that the writing also serves as a reminder of the fleeting nature of the student university experience, a reflection that hangs in the air as she prepares to close the chapter on her very own thirty years at Otago.