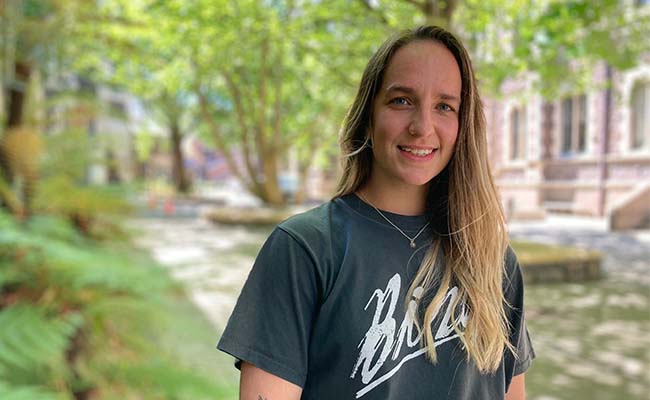 The first recipient of a prestigious scholarship named in honour of one of Aotearoa’s leading Māori health researchers says the award has enriched her academic and cultural journeys.

Niamh Casey-Popovich (24), was the inaugural recipient of the Tā Mason Durie Pae Ora Masters Scholarship in 2019. The annual scholarship was established by the University of Otago and Te Rau Ora in honour of Tā Mason Durie, and aims to support Māori students to study in the mental health and addictions areas.

“With Māori mental health inequities, having that connection with a clinician of the same culture as you can be massive for some people, and can help them reap the most benefits of treatment and of clinical psychology.”

Casey-Popovich, who is of Ngāpuhi and Waikato Tainui descent, started at Otago with a passion for mental health, but did not know the best path for her to take. That was, until she took an optional paper that ignited a fire.

“I took Psychology in second semester and absolutely loved it. I knew that this is what I’m going to do. I then found out about Clinical Psychology, which then became the ultimate goal and I just said to myself to do the work and see how we go.

“The Clinical Psychology Programme made so much sense for me because I love working with people, but still like the science side. It uses evidence-based research, but I can also help this person with their day to day lives.”

Knowing that she would need to do postgraduate study to have a chance of doing the Clinical Psychology Programme, Casey-Popovich decided to do her Masters in Science (Psychology) and applied for the Tā Mason Durie Pae Ora Scholarship.

As well as easing the financial pressure on her studies, she says the award has given her a strong connection to somebody she has yet to meet in person.

“In the Clinical Psychology Programme we work with Māori health models and Te Whare Tapa Whā, which of course Tā Mason created. Having that little connection and knowing that I have something that ties to Tā Mason is really cool.”

For Casey-Popovich, the award also came at a poignant time in her own cultural journey. Having lived in Australia for most of her early years, being disconnected from her wider whānau led to a disconnect with her taha Māori.

She says reconnecting to her culture has been a journey, while the last couple of years in particular have been significant.

“That’s something I’ve been finding quite hard with cultural identity and not appearing Māori or not feeling Māori enough. The scholarship put me at ease, which was lovely.”

With the first year of her clinical psychology programme nearing an end, Casey-Popovich’s cultural journey shows no signs of slowing down.

She understands the importance of her taha Māori and understands it is a precious taonga as part of her future mahi.

“I am Māori and I am going to be a Māori clinician, how can I use that?

“With Māori mental health inequities, having that connection with a clinician of the same culture as you can be massive for some people, and can help them reap the most benefits of treatment and of clinical psychology.

“The effect that has on their whanau and how it flows on, it does make me sentimental that I get to make it my job. If I get to do that for one person in my entire career, that’s incredible.”