Juggling toddlers and study in lockdown far from home 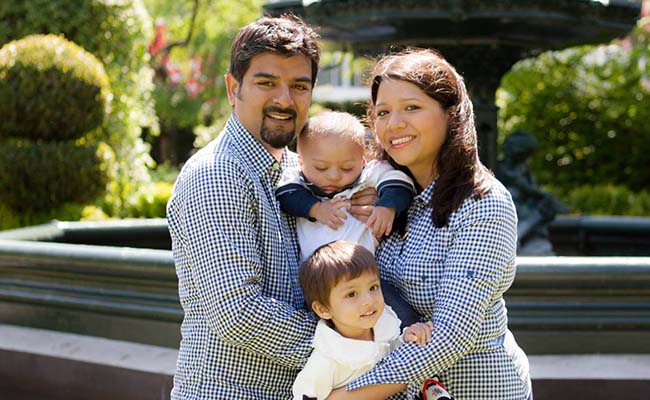 Anita Azeem with husband Arron and children Adaiah and Aryeh.

It’s tough enough moving across the world to undertake a PhD in a foreign country.

How about adding two toddlers, a COVID lockdown and a husband trapped offshore with the borders closed?

That’s exactly the situation Anita Azeem found herself in after she moved from Pakistan to Dunedin to study at the University of Otago in 2017. Four years later she is preparing to graduate with a PhD in Psychology on 15 December. Reunited with husband Aroon and working as a lecturer in the Department of Psychological Medicine, she hopes her story might encourage other mums thinking of continuing education.

“My heart is here though. New Zealand will always be very special. It's built me up. It's given me opportunities. I would say to other young mothers don’t let anyone tell you that you cannot pursue higher education because you have young children!”

In fact, she says juggling the demands of motherhood and research helped her navigate the challenging circumstances of the pandemic so far from home.

“The workload obviously was massive but I was aware of that before I started. In fact, I feel that having my children here served as a protective factor for me. Many overseas students get homesick, but I had my home with me,” Anita explains.

“My kids were giving me a nice break from my PhD work. When I went back home, I got to hang out with them. And because motherhood is so demanding as well, my PhD was giving me a break from that. It was like a nice balance.”

Anita’s journey to Otago began in the bustling city of Lahore where she had graduated with a Master’s in Clinical Psychology and was looking for a PhD opportunity at an overseas university.

She made some promising initial contacts but encountered a recurring roadblock: “The minute I told them that I had young children I sensed they weren't happy to have me on board because parenting would require a lot of time. I felt it was discrimination because the same wouldn't be an issue with a father of young children.”

That narrative changed completely when she contacted Otago’s Professor Ted Ruffman, from the Department of Psychology.

“That one email to Professor Ruffman changed my life. Professor Ruffman was very receptive to my research ideas and when I told him that I'm coming with children he had absolutely no reservations. in fact, he was very warm and helped sort of a lot of admin work from this end.”

Anita secured an Otago Doctoral Scholarship and moved to Dunedin with Aroon and their children Adaiah (19 months) and Aryeh (9 months). The young family found an instant support network through academic colleagues, childcare and the Leith Valley Presbyterian Church. Even when Aroon had to return to Pakistan for business, Anita says she felt very welcomed and secure in her new city.

“I had felt isolated in Pakistan because there isn’t any support for young mothers which puts you in a very difficult place psychologically. In Dunedin, however, I found parenting groups, Plunket nurses, playgroups, childcare and freedom for outdoor activities with children. I was like, ‘Oh my gosh, this is heaven on earth’. For me, coming to Dunedin has been one of the best decisions in my life. I found such a great support and encouragement in my supervisors, lab mates, Church friends and Montessori teachers. If it weren’t for all these support networks, I would have collapsed within the first few weeks!”

This supportive environment proved crucial when Aroon was stranded in Pakistan for 18 months: “COVID just changed everything. There was no hope that he could come back anytime soon. It was very hard.”

Under the supervision of Professor Ruffman and Associate Professor Jackie Hunter, Anita submitted her PhD thesis for examination in November 2020 after three years and two months of labour. Her thesis explored the role of media exposure and ideological beliefs in reducing outgroup prejudice.

Adaiah is now five and loving school, and the family is happily settled in Dunedin: “I can hear Aryeh’s kiwi accent already when he says yeeess,” she laughs.

Along with her teaching, Anita has completed a study measuring racial prejudice in children and wants to further explore how to support young children exposed to discrimination and bullying. In the future she hopes to in some way be able to support mothers of young children in Pakistan to help combat loneliness and social exclusion at this crucial stage of their lives.

“My heart is here though. New Zealand will always be very special. It's built me up. It's given me opportunities. I would say to other young mothers don’t let anyone tell you that you cannot pursue higher education because you have young children!”