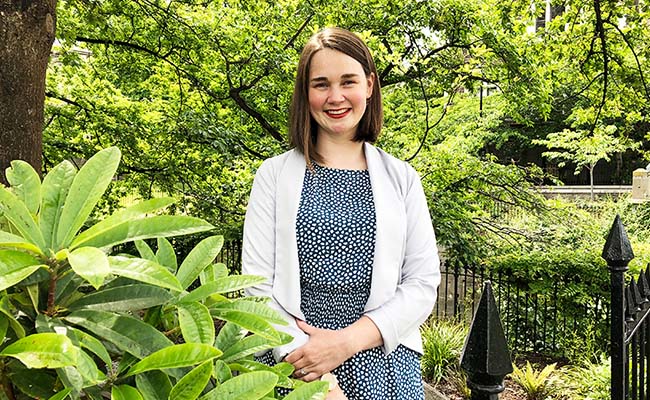 There’s a saying that our eyes are a window to our souls. That may not be scientifically proven, but PhD graduate Ashleigh Barrett-Young is making great leaps forward in understanding the scientific links between our eyes and our brain.

It turns out Ashleigh isn’t making just great leaps but exceptional ones, and her thesis on potential risk markers for Alzheimer’s disease achieving ‘exceptional’ status is a perfect reason to celebrate her graduation on 15 December.

“I was constantly amazed at the graciousness of the Study members being so open with providing all the info and data about their lives, primarily as they really believe in the purpose of the study.”

Raised in Dunedin, it’s fitting that Ashleigh is now a postdoctoral fellow in the internationally-regarded Dunedin Study, the longitudinal life course study of 1037 individuals born in 1972-1973.

Ashleigh’s own life course involved completing Bachelor of Arts with honours at Otago, but it was when working as a management consultant in Wellington and studying a psychology paper, that the lure of the subject took hold.

Returning to Dunedin with a newborn in tow she threw herself at her new-found subject and, supervised by Dunedin Study Director Professor Richie Poulton, researched the association between early life social predictors and photos of retina of study members at their study age of 38.

Extending this research to a Doctorate was the next natural step, with a focus on examining whether measurements of the neural layers and vascular system of the retina were associated with cognitive decline in middle age, a potential early indicator of Alzheimer’s.

“The retina is really fascinating as the cells in the retina connect directly to the brain and because of this it has been proposed as a marker of Alzheimer’s disease,” Ashleigh explains.

“The overall idea is that as brain cells are dying as a result of Alzheimer’s, this would then be observed in the retina.”

Her thesis research found links between retinal neural thickness and decline in cognitive processing speed from childhood to age 45, and may help identify those in the early stages of cognitive decline.

But there’s more to Ashleigh’s journey than solely being recognised as an exceptional researcher, and that’s in her role as a parent and mother to two children under five for most of her PhD journey.

“Being a parent while studying can be extremely challenging and isolating, but I think it’s also really important to help normalise that it’s possible to juggle postgraduate study and family life,” Ashleigh says.

“It can often feel very isolating as a parent and student, but you soon realise there are actually heaps of us out there. It’s just that we are often too busy to stop and connect for support.”

Ashleigh says the added pressure on her time made her hyper vigilant on using small time windows efficiently, and she also credits the supportive environment of the Dunedin Study including Professor Poulton who “allowed me to work at my own pace.”

“Ashleigh is smart, and a self-starter, so simply providing her with a supportive work environment was all that was necessary really,” Professor Poulton says. “She remained cheery throughout the whole PhD process, which is not always the case, and a true testament to her maturity and resilience.”

The serendipitous links between Ashleigh’s personal life raising kids and the Dunedin Study don’t escape her, especially the Study’s work on the crucial connections between a child’s first 1,000 days and “very real” physical and psychological health outcomes in later years.

For the most recent phase of the Dunedin Study when the participants were 45 years of age, Ashleigh was also employed as an interviewer and says interacting with the Study members as people was valuable to her both as a researcher and a mother.

“I was constantly amazed at the graciousness of the Study members being so open with providing all the info and data about their lives, primarily as they really believe in the purpose of the study.”

“This work is particularly exciting because even though the participants are still generally too young for an Alzheimer’s diagnosis, there are now signs emerging in the cohort of cognitive decline and decreased brain volume which therefore allows such investigation to take place."

“As a Dunedin girl it’s pretty cool that this amazing study is taking place in our city, and it’s so great to be part of it now and have the opportunity to contribute my little piece.”