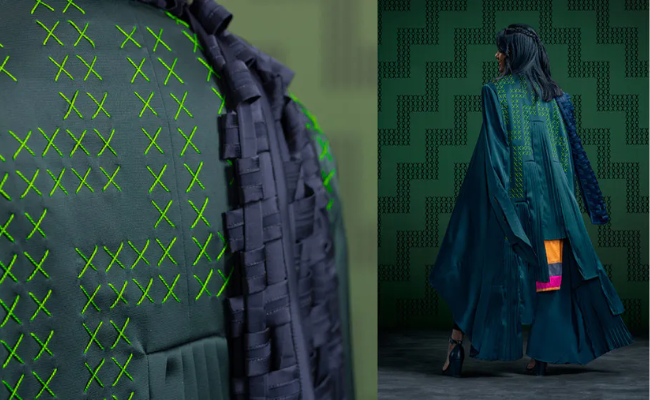 Graduation is an important celebration representative of hard work and a hopeful future, and for many encompasses humble beginnings.

This was the foundation for I Am New, a project run by Education New Zealand involving international students from around the country designing a new take on traditional kākahu (garment).

The kākahu represents connection between people and cultures through working and learning together.

Neuroscience and Psychology student Tiara Das consulted with designer Kiri Nathan on hers, taking into consideration the former’s home in India and her journey in New Zealand.

“I am a Kiwi Ambassador for Education New Zealand and last year they started planning this campaign and I expressed then my desire to be involved. I really wanted to be part of this.

“In April I was confirmed as one of the students to be part of this campaign and the team came to Dunedin to do some filming which was really cool. I flew to Auckland in May for the big kakahū reveal over two days of full-on work I got to meet the other students and Kiri who was the lead designer on the kākahu – she is so talented and has done such an amazing job on the gowns.

“The Poutama pattern on the back represents stairs, a journey. We were asked what colours are of importance to us and I chose green. Green is about growth and harmony and peace, and also a part of the Indian flag.”

The gowns were then designed by Kiri and made by Whitecliffe School of Fashion and Sustainability.

Tiara says this gown is an important note of recognition for her as an international student and her place in New Zealand.

“There are many challenges that come with being a student but one thing people don’t necessarily realise is there are so many added layers as an international student. This was a really cool mark of acceptance from New Zealand, a confirmation we are part of the team of 5 million.”

The third-year student is originally from Punjab, India and moved to Wellington with her family in 2018. She came to Otago for the undergraduate psychology major which is the only one of its kind in the country.

“I would love to work in the mental health field in health care. It’s unclear when or how it will present but it seems like a problem for next year,” Tiara laughs. “I would like to stay in New Zealand, but I’ll also always identify as Indian.”