2014 is the 50th anniversary of the Psychology Department at the University of Otago. We are proud to celebrate this event and look back on our history.

In 1964, Dr Stephen Griew was appointed as the University’s first Professor of Psychology. He was a gerontologist from the University of Bristol, with research expertise on the effects of aging in the workplace.

One of his first acts was to recruit two lecturers from the University of Sydney to form the new Psychology Department, and in 1965 about 90 students were enrolled in the first Stage 1 class.

The Department was based in Mellor House, with the laboratory classes held upstairs.

With another two lecturers appointed in subsequent years, the Department added second and third year courses in 1966 and 1967 respectively. The first-year course emphasised the study of sensation, perception, physiological psychology, and psychophysical methods, including the then new signal detection theory. In the second-year course, students studied learning and personality theories, and the third-year course offered specialisation in either experimental psychology, or abnormal behaviour.

From Philosophy to Psychology

Psychology had been taught at Otago for many years prior to the foundation of the Department, but as part of the Philosophy programme. The roots of the discipline are reflected in one of its early names, experimental philosophy. At Otago it formed part of the subject known as mental science. In 1882 the course in mental science covered three areas: psychology, ethics and logic. The Psychology lectures examined “Outlines of the physiology of the nervous system; Instinct; the senses and the intellect; Abstraction, with outlines of the Realistic Controversy; Perception, with outlines of the chief ancient and modern theories”. Courses in Psychology remained part of the Philosophy programme and it wasn’t possible to study Psychology at an advanced level without majoring in Philosophy. The establishment of the new Department and new major in 1964 allowed students to take Psychology for BA and BSc degrees.

Professor Griew had recognized that the study of operant behaviour was the ‘new’ significant development for Psychology in the 1960s, and he had persuaded the University to build a modest concrete block Annex for animal research.

He attracted the Department’s very first PhD student, Michael Davison, who arrived in 1966 to take up a Commonwealth Scholarship, following his undergraduate degree at Bristol.

Now a distinguished Emeritus Professor at the University of Auckland, Michael completed his PhD on fixed-ratio performance within two-years of starting it.

The second PhD to be completed with animals in the Annex was by Geoff White (1973), now Emeritus Professor at Otago.

Both Professors Davison and White are the only New Zealanders to be elected as Fellows of the Association for Behavior Analysis International. Although the Annex is no longer in use for animal research, it still stands near the corner of Leith and Union Streets.

In 1968 Professor Griew resigned from the Psychology Department, with the four staff he appointed soon to follow, leaving behind a productive record of research in experimental psychology including papers by Ray Over in Psychological Bulletin. He was an able administrator and moved to Dundee University to start their Psychology department, and later, was Vice-Chancellor of universities in Australia and Canada. He died in Canada in October 2010.

A new Professor and Head of Department, Peter McKellar, was recruited in 1969. Professor McKellar was a New Zealander who in 1949 had completed a Master’s thesis on colour perception in the University of Otago’s Philosophy Department, before moving to London for his PhD, supervised by Sir Cyril Burt. He had strong interests in introspection, imagery, and altered states of consciousness. His book, Imagination and Thinking (1957) is noted for its scholarship and for pioneering the study of mental imagery, pre-dating Hebb’s famous paper by three years.

From a department with four staff in Professor McKellar’s first year (1969), the department grew steadily during the 70s with a number of new staff coming on board. A post-graduate training programme in Clinical Psychology was established in 1974, with an intake of three students, with David Mellor the first of them to graduate, three years later.

There are four prizes awarded for academic achievement in Psychology each year. The T P H McKellar Prize - a book award to the student with the highest academic standing in Psychology 400 - is named after Professor McKellar.

By 1981, there were now 11 academic staff. The new staff included Associate Professor Richard Kamman who developed a novel research programme on happiness, and Dr David Marks, who coauthored a book with Richard Kamman using the psychology of decision making to explain performances of the kind that Uri Geller was known for.

Professor McKellar retired in 1985 and by the mid 1980s, most of the staff appointed during the McKellar years had left. An exception was Bob Knight, who was appointed in 1977 to the Department’s Clinical Psychology Programme; he is currently Professor in the Department and ran the clinical programme for 19 years.

In 1981, the University recruited a new Professor and Head of Department, Graham Goddard. Graham was a Canadian who was famous for his discovery of ‘kindling’, a brain mechanism which modelled epileptic seizures and brain plasticity. Graham had a major impact on the development of the Department but died tragically in a flash flood while tramping, in January 1987. The Goddard Laboratory is named after him and his legacy is the exceptional research strength in Neuroscience at the University of Otago.

His first Otago PhD students were Mike Dragunow (1985), now Professor of Medical Sciences at the University of Auckland, and David Bilkey (1986) now Professor in the Department, and Head of Department for five years to 2013.

Graham, together with Neil McNaughton and Cliff Abraham was instrumental in starting the University’s Neuroscience degree (for long the only one in New Zealand) and the Australasian Winter Conference on Brain Research (which has continued for more than 30 years).

Professor McNaughton directed the Neuroscience Degree Programme for 16 years; and is well-known for research on the septo-hippocampal system and the neuropsychology of anxiety.

Professor Abraham leads an influential research programme on long-term potentiation, a major neural mechanism for memory. He directs the University’s Brain Health Research Centre, and in 2009, was awarded the University’s Distinguished Research Medal.

The new Professor and Head of Department during this period was Geoff White. Professor White was a student at Otago in the early 1970s and had returned in 1985 after some years at the Victoria University of Wellington. He was keen to build the first-year programme as a showcase for Psychology and recognised the importance of graduate research for the Department's success.

Read about the O-zone Group, the brainchild of Professor Geoff White during his time as Deputy Vice-Chancellor

A second Professor, Jeff Miller, a prominent and highly cited expert in human perception and attention, was appointed in 1994, and in subsequent years, several other senior staff were promoted to Professor, reflecting the success of the Department. From 1998, Professors Jeff Miller, Bob Knight, Cliff Abraham, and Harlene Hayne  each served as Head of Department for three-year terms, followed by Professor David Bilkey for five years, and Professor Mike Colombo, the current Head.

Psychology Heads of Department for the years 1997- current

A significant development from the mid 1980s was a local area network of micro-computers with purpose written software to support the 30 weekly introductory Psychology lab classes. The network was extended to support staff teaching and research, as well as administration. It provided the basis for piloting the University’s electronic transmission of final exam results from Departments to the Registry in the early 1990s.

Strong technical and administrative support, plus research work carried out by Research Fellows and Postdocs has underpinned the Department’s success in teaching and research. From the mid-1980s, Barry Dingwall, Senior Technical Officer, and Isabel Campbell, Administrative Secretary, both of whom were appointed by Professor Griew, ably led the Department’s support and research staff.

This support has continued for many years and set the stage for the wonderful support academic staff and students currently enjoy, recognised by the University in 2012 through a General Staff Award for Exceptional Performance. 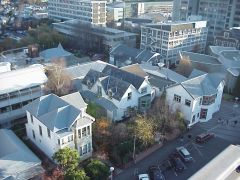 Psychology houses, with Mellor House in the centre

Immense growth in the numbers of students and staff put considerable pressure on resources as for much of its history, the Department was housed in a collection of prefabs and old houses. It wasn’t until 2010 that the space problem was finally resolved by the construction of the William James building.

Link to further information about the Psychology buildings

Growth since the mid-80s is reflected in the large number of PhD graduates from the Department.

In each of five consecutive decades from 1964, there have been 5, 10, 31, 76, and 66 PhD graduates, many of whom have gone onto successful careers in universities around the world, professional psychology, and local government agencies.

Our postgraduates are an integral part of our department; last year, four enterprising students took it upon themselves to create a 60-page department magazine, called 'think.'.  It is full of interesting information about the happenings within Psychology - written (mainly) for students - from a student point of view.  It highlights the cohesiveness of all the different aspects of the Department, and goes some way of showing why Psychology at Otago is so successful.

This beautifully presented magazine will be used to showcase Psychology to secondary schools.

Read the announcement in the Otago Bulletin

There have also been over 240 graduates from the Otago Clinical Psychology training programme, many of whom work as registered Psychologists in the health-related services in New Zealand and abroad.

Psychology at Otago is a leading research department both nationally and internationally. The many research publications by staff are highly cited, and recent book authors have attracted attention. Emeritus Professor Jim Flynn was invited to speak at TED after the launch of his most recently released book entitled Are we getting smarter? - and Professor Elaine Reese, launched her book Tell Me a Story: Sharing stories to enrich your child's world last year.

The research effort in the Department is supported by very strong and successful post-graduate research.

Read about our renowned excellence in research here

Find out more about our staff's research interests here

Find out more about postgraduate research in Psychology

All current staff members are highly respected both for their international research contributions as well as for their teaching.

It was Professor Geoff White who received the University’s first ‘supervisor of the year’ award, and he was followed by Professors Mike Colombo, Harlene Hayne, Liz Franz, and Jamin Halberstadt. The University has recognised other staff for their excellence in teaching, and many have won University, national, and international awards for research.

Over the last 50 years, many staff and graduates have had a major impact in the discipline and gone on to take up influential positions in universities, and community and professional organisations. To give just a few recent examples, Professor Harlene Hayne, who joined the Department as a lecturer in 1992, and who helped develop the Department’s strengths in developmental psychology, is now the University’s Vice-Chancellor. Professor Geoff White was appointed as a Deputy Vice-Chancellor, Research and Enterprise for the University, and Professor Bob Knight is the University Provost.

As a Department we are proud of all of our achievements, and we look forward to the further success of staff and students over the next 50 years. 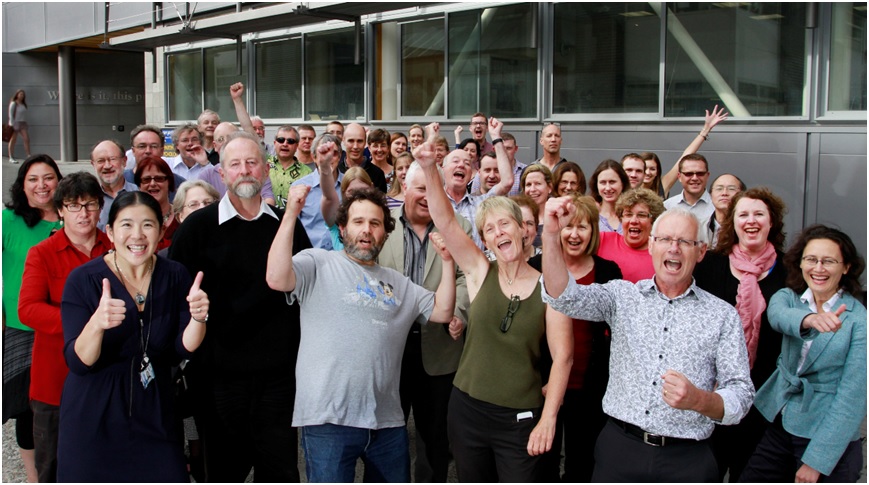