Lecturer and Researcher in Psychology, University of Otago 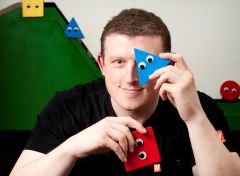 right: Dr Damian Scarf with some of the stimuli used to explore moral reasoning in infants

“I never planned on doing my PhD in the Department of Psychology; in fact, if it wasn’t for a fill-in psyc paper I took in my 3rd year, I wouldn’t be here at all … and now I’m actually lecturing Psychology and supervising students of my own.”

Damian’s rise in psychology is nothing less than inspirational. Although keen to learn, he was streamed into the lowest classes throughout secondary school.

“Once you’re there it’s almost impossible to work your way up, especially if it is a disruptive class as mine was. By year 11, I had already missed out on what I needed to know in order to succeed in years 12 and 13.”

So, failing school, Damian ended up on the dole. He finally returned to study at polytech enabling him to gain entrance to Otago where, because of his fascination in animal experts David Attenborough and Steve Irwin, he decided on a degree in Zoology.

It was grueling. “I realised I still wasn’t at the level required to succeed in that first year – I didn’t have the foundation I needed that you normally learn in those latter school years.” Damian had no choice but to put his head down and work really hard just to pass.

As his efforts increased, so did his results.

Coming across a Psychology paper titled Comparative Cognition in his 3rd year at Otago sealed Damian’s future. The paper description said the course focused on how animals differ in their learning abilities, and made some reference to critical thinking.

“To be honest, I had no idea what was meant by critical thinking, but was sold on the word ‘animals’.” The lecturer of that class was Professor Mike Colombo.

“I thought Mike’s classes would be about animals doing cool tricks and clever things. Mike, however, was focused on critical thinking and encouraged us to challenge the ‘amazing’ things animals could do. Are pigeons really art critics? Do pigeons really prefer Monet over Picasso?”

Critical thinking was something Damian had never been taught before, and it completely captured his interest.

“In my mind, in each class, we became detectives. We would review a study and then attempt to uncover how the animals were performing such ‘amazing’ feats and why certain species performed better than others. Having the playful idea of being a detective made my PhD fun and I think having fun was critical in helping me to overcome the hurdles and setbacks I experienced.”

During his PhD his detective skills were applied to areas beyond comparative cognition.

“Professor Harlene Hayne and her students alerted me to a study published in the prestigious journal Nature that concluded that infants are born with a rudimentary moral compass. Unsure about the paper’s conclusions, they asked me to read over the paper and determine whether it was scientifically accurate.”

Damian once again went into detective mode. He came up with a much simpler explanation of the infants’ behaviour, one that didn’t require an appeal to a sense of morality. They constructed a replica of the apparatus used in the original paper, tested his idea, and it worked. Similar to pigeons’ preference for Monet over Picasso, infants’ preference for a ‘helper’ over a ‘hinderer’ could be explained by simple perceptual preferences.

“Did my playful approach to my PhD work out? I am happy to say that it did. I garnered nine first author publications during my PhD and finished my PhD on time. My venture into developmental psychology also worked out as I was employed for a short time as a Postdoctoral Fellow in Professor Hayne’s Early Learning Project lab (ELP), and am now a lecturer in psychology and neuroscience.”

Damian now has his own research laboratory - the Animal Behaviour and Child Development Lab (ABCD) where he supervises four Masters and three PhD students of his own.

“I love teaching and supporting students and trying to raise their interest in the subject, because I know that was part of the key for me. And often students who’ve had to struggle become the best researchers.”

As well as teaching and researching, Damian is available to offer advice to current and potential students about the available careers in psychology, and responsible for coordinating departmental seminars where national and international visitors to the department are invited to talk to staff, students and the public.

“These talks are important to staff and students in psychology as it keeps us up-to-date with current research around the world.”

Just remember, years 11 to 13 at secondary school certainly forms the basis of good study habits if you are thinking about further education towards the career of your choice.

"However, if it doesn't pan out they way you originally expect, it is never too late to get to where you want to be if you put your mind to it" he reminds us.