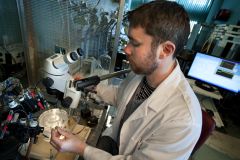 Dr Owen Jones completed his PhD in Professor Cliff Abraham’s laboratory at the University of Otago’s Department of Psychology. Prof Abraham’s group has long been interested in mechanisms that regulate the strengthening of connections between neurons (nerve cells). This strengthening, called long term potentiation or LTP for short, is widely believed to underlie learning and memory.

“As part of the work included in my thesis, I demonstrated that certain patterns of brain activity can reduce the amount by which neurons can strengthen their connections later on. Perhaps more interestingly, I showed that this effect requires the activity of another type of brain cell called astrocytes”.

These cells were once considered as passive ‘support’ cells that didn’t contribute directly to learning or information processing. The experiments Owen conducted during his PhD have contributed to a growing body of work that suggests astrocytes are direct participants in processes that control learning and cognition.

“I was lucky enough to publish the results from my thesis in three journal articles and to present them at international conferences in the USA and Europe” says Owen proudly.

Since graduating in May 2014, Owen has continued his work in the Abraham lab as a Postdoctoral Fellow. To do this, he and Prof Abraham had to apply for research funding from the Health Research Council of New Zealand and the Neurological Foundation of New Zealand.

“The funding climate is extremely competitive, so it was a huge relief when we were told our applications were successful. This has guaranteed the continuation of the project for a further three years (and, helpfully, given me a job).”

The great thing about the continuation of this project is that they are now able to look specifically at how astrocytes might be involved. To do this, Owen is establishing some new techniques in the lab which will allow them to monitor and manipulate the activity of these cells.

“These techniques haven’t really been available to us previously in the lab, so it’s exciting to be involved in setting them up here. We also have a new PhD student involved with the project who is looking at how our work might apply to pathological conditions such as Alzheimer’s disease.”

Astrocytes are known to alter their activity dramatically in many disease states, so it’s important to know the consequences of these changes for cognitive function.

“It is an exciting time to be an astrocyte researcher. There seems to be a new paper every week suggesting a previously unknown role for these cells, and a lot of what’s coming out is quite controversial and generates high-impact work. It feels pretty cool to be a part of a research area that’s causing such a buzz. It would be great if our work could be a part of that!”