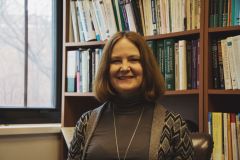 Rachel Barr found Psychology an intriguing topic right from the very first lecture when Professor Cliff Abraham started talking about brain damage as a potential explanation for left-handedness … and then proceeded to pick up a pen in his left hand and say that the science of psychology not only asks about how the brain works - but why.

“I was hooked from the beginning.”

In 1991 Professor (then Dr) Harlene Hayne joined the faculty and Rachel met with her to ask if she could be her honours student in the newly formed Early Learning Project (ELP).

“Professor Hayne had just moved from Princeton, NJ to work at Otago, and it seemed incredible that studying how babies learn and remember was now an available option for me.” 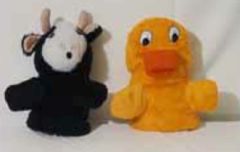 The puppets that set the stage for her career

For her honours, Rachel began working on the deferred imitation puppet task which was first published in 1996, with Hayne and Barr as co-authors and has since been cited hundreds of times. Barr went on to complete her PhD with Hayne - examining sources where infants can imitate from - including television and siblings. She obtained her Postgraduate Diploma in Clinical Psychology (DipClPs) at the University of Otago as well.

Rachel then moved to Rutgers, New Jersey to work at the Rutgers Early Learning project as a post-doctoral fellow with the late Professor Carolyn Rovee-Collier, a pioneer and leader in the field of infant development. There she began to examine how infants could link memories together to form long-lasting memories.

In 2001 she started as an assistant professor at Georgetown University where she began her own Georgetown Early Learning Project and is now an Associate Professor.

“I have continued to examine learning from media during early childhood and have recently released some new guidelines with ZEROTOTHREE an advocacy group, called Screen Sense which summarises research that I had started at Otago and have continued to work on for the past 15 years. The guidelines have been reported in the Auckland Herald and CNN amongst other outlets.”

“I have been able to use all of my Otago training which prepared me to design experiments and to ask questions that are both interesting theoretically and important for society.”