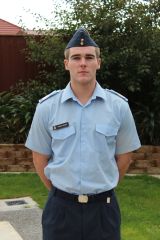 During his initial years at Otago University Stephen Wright had a general interest in psychology. However, it was not until taking Applied Psychology (now Cognitive Engineering) in his 3rd year that his passion for human factors/aviation psychology began.

“Assoc Prof David O’Hare’s videos and descriptions of aviation accidents opened my eyes to the world of applied psychology. The notion of being able to apply psychological principals in exciting real world situations really set this area apart.”

When it came to his Master’s research Stephen went straight to Professor David O’Hare with the intent of performing research in the aviation psychology field (since he had a flight simulator it was a very easy choice).

“After throwing around a few ideas we decided to focus my research around the transition from analog to digital flight displays.”

The transition from traditional cockpits (analog) to glass cockpits (digital) is a very current issue in the world of aviation and is one that the Royal New Zealand Air Force (RNZAF) is currently facing. While still writing his thesis Stephen applied to become a psychologist in the RNZAF and was subsequently employed.

“Immediately after completing my thesis I began working at the RNZAF. In this time I have conducted work around human factors, aviation psychology, post-deployment issues and aircrew/officer selections. Some of the other highlights have been aerobatics in a CT-4 Airtrainer (got to fly a few loops and barrel rolls myself which was amazing), a flight in an Iroquois and flying the 10 million dollar A109 helicopter simulator.”

Stephen is nearing the end of 23 weeks of officer training at Woodbourne Military Base. During this time he has trained in RNZAF customs and protocol, drill and parades, military law, military field skills, weapons training, first aid, command leadership and management, defence and strategic studies, personal administration and communication skills. Upon the successful completion of officer training he will be commissioned with the rank of Flying Officer and then begin his psychologist registration year.

“Once I am registered as a psychologist I will be involved in a broad range of organisational, military and aviation psychology activities. These range from conducting selection activities, through to providing recruitment advice and performance orientated counselling, as well as aviation related projects through to supporting operational deployments and peacekeeping activities overseas.”

Some of Stephen’s future aspirations as a military psychologist are to have a more specialized human factors role or to be in the NZ SAS psychologist role.