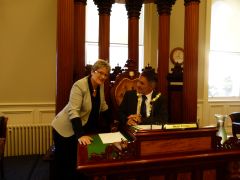 Sue Bidrose’s life has taken several unexpected twists and turns since studying at Otago in the 1990s. She initially chose Dunedin when she visited a friend for the weekend and fell in love with the city, and declared she’d never leave. Despite some intervening years in central government in Wellington, and local government in Auckland, her career has done full circle and bought her back to Dunedin.

She initially enrolled in her Bachelors in Psychology with the intention of doing a Clinical degree, but was won over to an academic and research path during her studies. As her doctorate neared completion, she took a job at MSD in Wellington, in the research unit (taking a job before completion was a fateful move, as her PhD languished uncompleted for some years once she was working – be warned, should you be tempted to do likewise!) MSD is a large institution, and she found it a good place to get a breadth of public service experience.

Sue worked in research, policy, project delivery and operational roles in her time there, before moving off to a five year stint in West Auckland at Waitakere City Council – where she finally found the few weeks needed to complete her doctorate. And subsequently, as a refugee from the ‘Super City’, three years ago she took up a council General Manager role back in her beloved Dunedin, and was appointed CEO of the Council late November 2013.

Local Government suits her well ‘and Senior Management in a Council is ideally suited to someone who thrives on variety’ she says. ‘The job has such huge diversity. On any given day I might be dealing with issues related to libraries, gambling, parking, rubbish disposal, supporting businesses, and marketing the city – and I even picked up a role as observer on the local Rugby Football Union!’

And she says the Psychology degree has suited her well for the role. ‘Working in a Council is about public service, making a difference in people’s lives, making a city liveable – and then working with some wonderfully talented and committed staff and Councillors to make that happen. The study and research fitted me well for that sort of work’ she said.