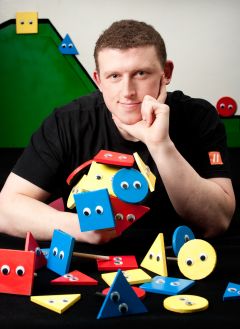 When Damian started at the University of Otago, his method of selecting his major was simple.  “I was an avid watcher of the Crocodile Hunter and David Attenborough, so Zoology seemed like my best bet. I had no idea where Zoology would take me, but the papers sounded interesting.”

He also picked a few Psychology papers, eventually coming across a Psychology paper titled Comparative Cognition in his 3rd year. The paper description said the course focused on how animals differ in their learning abilities, and made some reference to critical thinking.

“To be honest, I had no idea what was meant by critical thinking, but was sold on the word ‘animals’.” The lecturer of that class was Professor Mike Colombo.

“I thought Mike’s classes would be about animals doing cool tricks and clever things. Mike, however, was focused on critical thinking and encouraged us to challenge the ‘amazing’ things animals could do. Are pigeons really art critics? Do pigeons really prefer Monet over Picasso?”

Alas, it appeared that pigeons were basing their decisions on simple properties of the paintings rather than an appreciation or preference for their artistry.

Critical thinking was something Damian had never been taught before, and it completely captured his interest.

“In my mind, in each class, we became detectives. We would review a study and then attempt to uncover how the animals were performing such ‘amazing’ feats and why certain species performed better than others.”

It was a quest to answer this latter question that led him to conduct his PhD in the Department of Psychology. “Mike told us about a particular task that monkeys excelled at but pigeons failed on. I had an idea on why the pigeons failed, and suggested an experiment to test my hypothesis.”

Mike thought it was a great idea and let Damian run the study in his lab. While being fraught with difficulties, it led to a series of studies from which he was eventually able to show that pigeons can pass tasks people previously thought were beyond them.

“Having the playful idea of being a detective made my PhD fun and I think having fun was critical in helping me to overcome the hurdles and setbacks I experienced.”

During his PhD his detective skills were applied to areas beyond comparative cognition. The photo you see features Damian in his first foray into developmental psychology.

“Professor Harlene Hayne and her students alerted me to a study published in the prestigious journal Nature that concluded that infants are born with a rudimentary moral compass.  Unsure about the paper’s conclusions, they asked me to read over the paper and determine whether it was scientifically accurate.”

Damian went into detective mode.  He came up with a much simpler explanation of the infants’ behaviour, one that didn’t require an appeal to a sense of morality. They constructed a replica of the apparatus used in the original paper, tested his idea, and it worked.

“Did my playful approach to my PhD work out? I am happy to say that it did. I garnered nine first author publications during my PhD and finished my PhD on time. My venture into developmental psychology also worked out as I am now a Postdoctoral Fellow in Professor Hayne’s lab.”