“As a teenager I was an Arts student at heart; I have always been passionate about writing and language but I didn’t expect to be analysing these aspects from a social cognitive perspective for a PhD.”

As an undergraduate at the University of Otago, Helen Owen took a mixture of psychology honours, French and linguistics papers. She also worked as a Youthline phone counsellor and trainer, where her psychology learning took a more practical, hands-on approach. However, by her fourth year of study, she was focussed on her psychology honours’ degree, which she completed in 2011 with first class honours. As part of her dissertation under Professor Jamin Halberstadt’s supervision, she examined the negative impact of increased verbosity in older adults on their ability to detect and conceal lies in their speech.

“I wanted to further explore the relationship between language complexity and perceived honesty, but based on a holistic analysis of personality, rather than an analysis of the specific words used when someone is telling a lie versus a truth. So, I was pleased to continue researching with Jamin in the Social Cognition Lab and particularly excited to be awarded a University of Otago Doctoral Scholarship in 2012.”

As part of her PhD research, Helen ran several creative writing experiments in which participants were given specific instructions to simplify or enhance their language on a social or educational topic of their choice. Using the latest online software, they recruited several hundred native English-speaking participants to read a story and make judgements about the writer, such as likeability and honesty, and the readability of the statement.

“The results were quite staggering and contradicted the widely held misconception that complex, sophisticated language is more professional and enhances credibility. Instead, writers of simple statements were more likely perceived as honest because their writing is fluently processed. The most difficult part of this research was identifying the markers of coherence, cohesion and syntactic complexity that are responsible for fluent processing. These are all aspects of our language that we use subconsciously and are difficult to manipulate in the writing of others. I feel that by actively attending to and modifying their communication style, politicians, professional writers and bloggers can learn much about themselves and how to best engage with their audience. I enjoyed sharing my research and views about this as a guest lecturer in a paper in the English department.”

Working in the Social Cognition Lab has also given Helen opportunities to collaborate on other projects, including fluency and attractiveness of gender and racially ambiguous faces and the relationship between selfie-taking on narcissism.

“I would also recommend to future postgraduates the opportunity of being a lab demonstrator in the department; it’s rewarding, fun and confidence-building” Helen adds.

“Looking back on my PhD journey, it has definitely been one of self-discovery, perseverence, patience, team work, and development of analytical and creative skills that prepare you for the workforce.”

Helen's research has been cited in numerous media outlets including newpaper articles, TV and radio interviews. 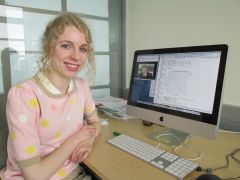