If you had told Ben Riordan a few years ago that he would be doing a PhD he would’ve laughed at you.

“I was a pretty ordinary undergraduate student. Although I did better than ‘just scrape through’, I didn’t really apply myself during my undergraduate degree in Psychology (minoring in music). It wasn’t until my fourth year that I started to seriously enjoy what I was doing and considered doing more research. The Drugs and Behaviour paper in particular was a game changer.”

Ben found himself spending his spare time doing extra readings on anything to do with addiction. As fortune would have it, during his fourth year he was also living with 500 first-year students in a residential college where he worked as a residential assistant.

“While in the college I was able to observe how new students interacted with alcohol and recognised the pressing need for interventions to focus on early university life. I was particularly interested in periods of time when students would drink excessively and experience more harm, times like Orientation Week.”

So while Ben was writing up his Master’s thesis (in something completely unrelated) he was also discussing with Drs Tamlin Conner and Damian Scarf ways they could research some of the impacts that periods of excessive alcohol consumption may have on students and possible interventions to decrease drinking during these periods.

For their first study, they decided to look at first year students’ Orientation Week alcohol use, to determine whether the heavy drinking students exhibited during that week would continue throughout the academic year.

With this knowledge they began to develop an intervention that focused on reducing Orientation Week drinking, in the hope that if they could reduce drinking during that time period, they could also decrease academic year drinking.

“The messages we send highlight the social impact of alcohol use (which new students seem to find particularly effective). These messages are pretty blunt “Don’t be a dick, think about your mates when you drink”, but they appear to work! We have trialled the intervention in three different groups of students at two different residential colleges and it seems that those who received the intervention consumed less alcohol during both Orientation Week and the academic year”.

This is an exciting finding, Ben says, because the intervention is simple, cost effective, and to date, appears to be successful.

“Our hopes are that we can continue to develop the intervention and implement it on a larger scale in order to reduce new students’ alcohol use and alcohol related harm. We are still in the early stages of this research but we are hugely excited with our preliminary findings. I am still not sure what I will end up doing after my PhD, but my hope is that I can find a way to continue this research.” 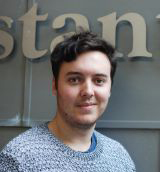