The School of Dentistry aims high 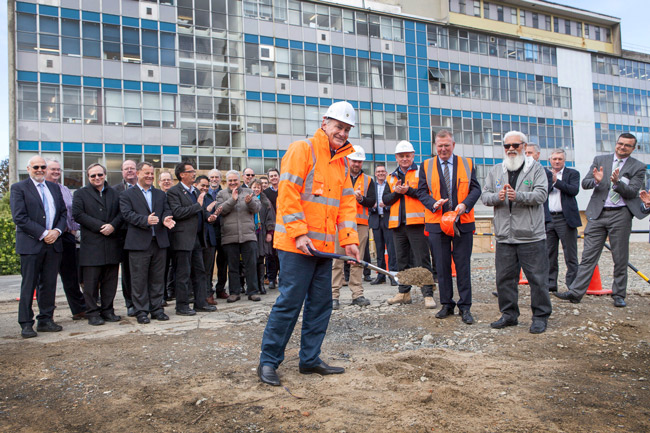 Underway … University of Otago Chancellor John Ward does the honours on the site for the School of Dentistry’s new clinical building.

The first sod has been turned for the School of Dentistry’s new clinical building, with the aim of realising the Faculty’s ambition to be one of the top 10 schools in the world within nine years.

Dean Professor Paul Brunton says it will be “the most modern dental school in the world when is completed.”

It is already among the top 20 dental schools globally, based on the QS World University Rankings by subject, but “we have significant ambitions to excel further and having state of the art facilities will allow us to realise our ambition to be a top 10 school by 2025”.

Dentistry is not only Otago’s top-ranked discipline, but is also the highest-ranked subject internationally for any New Zealand university.

The Faculty of Dentistry is home to New Zealand’s only dental school, which treats patients from the community as part of students’ training.

The future ... An artist's impression of the atrium which will link the new clinical building with the (at right) Walsh Building.

While staff are already renowned for their world-leading research, having a fantastic new facility will mean they can excel even more, and students will benefit from a cutting edge dental education based on that research.

The Faculty already attracts international students because of its global reputation but cannot increase student numbers until the new building has boosted capacity, Professor Brunton says.

University Chief Operating Officer Stephen Willis says the new clinical building should be finished about mid-2018, then the existing Walsh building will be vacated and refurbished. That work is expected to be completed in the third quarter of 2019.

The new clinical building will be about 8000 square metres and will be constructed next to the dental school’s existing Walsh Building, which is about 10,000 square metres.

Project manager Aurecon, the School of Dentistry and the University have re-thought keeping half the Walsh Building occupied during construction.

They are proposing research, dental technology, histology and some teaching be temporarily relocated, mostly to the northern end of the campus.

The project team has focused on using existing space rather than adding or developing new temporary space, and it is likely those existing spaces will be used for 18 months to two years, Mr Willis says.

An artist's impression of the new Dental School interior.

“This (strategy) will result in a shorter programme as well as making it safer and more comfortable for students, staff and patients during the works.”

The new clinical building will house services currently in the Walsh Building, including radiology, oral surgery, paediatric dentistry, undergraduate clinics and orthodontics. In total, there will be 211 new dental chairs, 61 more than now.

That land is not only being cleared for the new clinical building, but also for a 1800 square metre atrium and a “social space” that will link it to the Walsh Building.

Construction firm Leighs Cockram JV has been appointed to build the new Dental School. It is a joint venture company made up of Christchurch-based Leigh’s Construction, and Australian-based Cockram’s Construction.

The company is “among a few in New Zealand that we believe are capable of successfully delivering a project of this size and complexity.”

“Leighs Cockram JV brings with them recent relevant experience with a number of the team having just completed the Burwood Hospital project in Christchurch. We also know there will be significant engagement locally from the sub-contract and labour market, which is fantastic for Dunedin, and the local economy,” Mr Willis says.

The progress of the building project can be followed on a time-lapse web-cam which constantly refreshes its images.