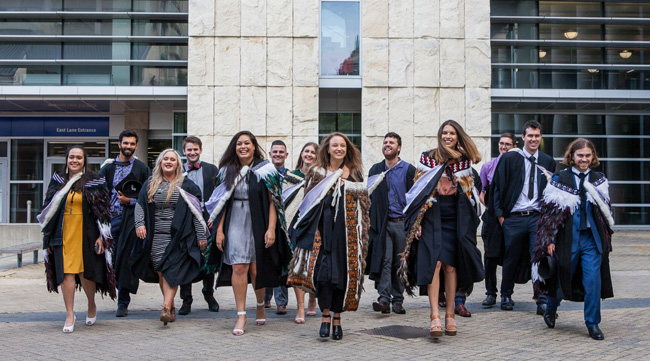 Some of the 45 Māori medical students who graduated from the University of Otago over the weekend. Photo: Sharron Bennett.

The weekend’s milestone graduation of 45 Māori medical students was a momentous occasion for those who have worked to support these students during their years of study at Otago.

“Since the MHWDU was established in 2010 our team has had the pleasure to get to know many of these students personally,” she says. “We have witnessed how hard the students have worked and their efforts and contributions towards other students and the kaupapa of Māori academic excellence have been tremendous.”

"We have witnessed how hard the students have worked and their efforts and contributions towards other students and the kaupapa of Māori academic excellence have been tremendous."

In 2010 the Unit delivered Tū Kahika, a scholarship programme to support up to 20 Māori students to fulfil their ambition to become health professionals. In 2011 Te Whakapuāwai was developed – a wrap-around programme of academic, pastoral and cultural care for Māori students enrolled in Health Sciences First Year. On Saturday, the first of the students to be supported by these programmes walked across the stage at the Dunedin Town Hall to be capped as doctors.

“We set some very clear goals early in 2010 and have exceeded these targets,” Ms Bristowe says.

“Otago is directly contributing to Māori health workforce development in Aotearoa through innovative, evidence informed practice that is very collaborative, working with the schools, faculties and various student support networks, in particular the Māori Centre, towards these goals. We would like to acknowledge the Ministry of Health for its ongoing contribution and support.”

The milestone graduation continues a legacy created by the University of Otago over a century ago, when Te Rangi Hiroa graduated in 1904 as the first Māori doctor to graduate from a New Zealand university.

It means that for the first time at Otago Māori representation within the total number of medical graduates equates to the proportion of Māori in the New Zealand population.

Professor Peter Crampton, Pro-Vice-Chancellor, Division of Health Sciences and Dean, University of Otago Medical School says New Zealand’s medical workforce is on the verge of some rapid and very exciting changes in both the number and proportion of Māori doctors.

"My hope and expectation is that within the next decade it will be normal for New Zealanders, when they enter the health system, to be treated by a Māori doctor."

“The graduation this year from the Otago Medical School of 45 new Māori doctors marks a significant inflection point – we expect at least this number of Māori doctors to graduate each year from now on,” Professor Crampton says.

“My hope and expectation is that within the next decade it will be normal for New Zealanders, when they enter the health system, to be treated by a Māori doctor. I would like to thank and congratulate our Māori leaders, staff and students for their hard work and dedication in making this possible.”

Ms Bristowe agrees. She says what has been truly inspiring is how much work the senior students put in to support new students.

“They are role models that make a huge contribution to the student experience and Māori development at Otago.

“We look forward to seeing similar numbers of Māori graduating as health professionals each year. It has been an amazing journey.”