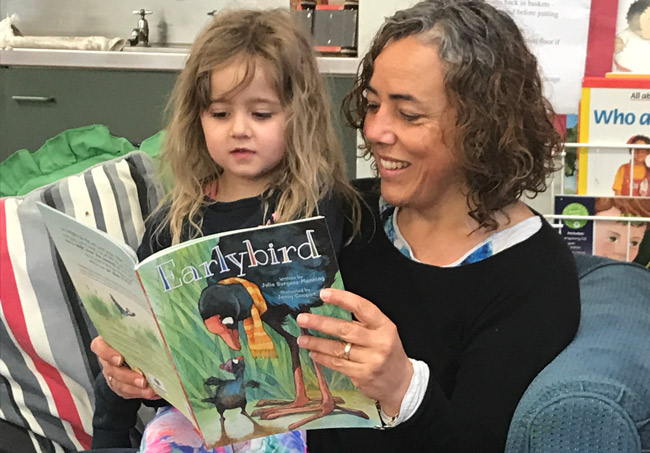 Julie Burgess-Manning (right) of the University's Wellington campus reads from her newly released book Earlybird, which aims to give children born prematurely and their families a story about their early lives.

Writing a children’s picture book for the families of premature babies has been a project close to the heart for author Julie Burgess-Manning, a lecturer in the Department of Psychological Medicine at the University of Otago, Wellington.

Not only did the project fit in with her professional work as a family therapist, it couldn’t have been more relevant to her own personal experience.

Ms Burgess-Manning’s youngest daughter Rosetta Manning (4) has a condition called oesophageal atresia which means she was born without the part of the oesophagus which connects the throat to the stomach, and had to spend her own first days in the neonatal intensive care unit.

"The pukeko is such an iconic bird for New Zealand, and it’s also really easy to ham up a little bit, because it is orange and blue and you can use those colours to make it beautiful – and also make it funny."

Ms Burgess-Manning, who works for the University’s distance learning programme from her base in Christchurch, has previously written books to help children weather the trauma of the Christchurch earthquakes.

Her latest book was commissioned by the Champion Foundation, an organisation which provides services for young children with disabilities. The concept for the book was originally conceived by Champion Centre founder Dr Patricia Champion who says she wanted to give children born early and their families a story about their early lives, as well as an explanation for older siblings about why their baby brother or sister couldn’t come home from hospital immediately.

Earlybird focuses on the experiences of a pukeko called Peri, a baby bird who hatched early and follows his journey as he gets ready to go home and learn to fly.

Ms Burgess-Manning says using a feathered hero made it easier to get into the issues surrounding an early birth.

“The pukeko is such an iconic bird for New Zealand, and it’s also really easy to ham up a little bit, because it is orange and blue and you can use those colours to make it beautiful – and also make it funny.”

While her professional and personal life made her uniquely qualified to write the book, Ms Burgess-Manning also interviewed a number of families to ensure the book was as authentic as possible.

At the book’s launch in Christchurch, a member of the audience made it clear just how well she had captured the experience.

“One parent stepped forward in tears and said that it was spot on for him. That was fantastic validation. It was great to hear that we had hit the nail on the head.”

Ms Burgess-Manning says the book gives her the opportunity to reach more people than she could solely through her work as a therapist.

“It is a way I can blend family therapy with creativity to reach a larger population because one thing about family therapy is you get to see families, so you have a bigger impact, but I have always had a wish to be able to influence communities in a therapeutic way and that is really difficult to do.”

While outcomes for babies in the neo natal intensive care unit can be uncertain, the families that Ms Burgess-Manning spoke to were consistent in wanting the book to have a message of hope.

"One parent stepped forward in tears and said that it was spot on for him. That was fantastic validation. It was great to hear that we had hit the nail on the head."

“The end of the book is about Peri trying to fly - and he can’t fly because his wings are too small. All the other little birds born at the same time are getting ready to fly together for the first time at Fledgling Day. And Peri has been practising and he can’t do it. And that’s what he’s saying to his Dad on the cover of the book: ‘Dad I can’t do it. I just want to fly and I keep falling in the mud’.

“And his Dad comforts him, and then he says, ‘actually the doctors have got a secret; they have got a little surprise up their sleeves’. So then Peri gets these wings - a bit like an aide that he gets to learn to fly - and so then he is able to fly with all the other birds on that day.”

From there, though, the outcome is left up in the air.

“That’s actually what happens to these kids because so often they need help still and everybody’s working together and they can be assured of that, but we can’t actually really predict what’s going to happen in future,” Ms Burgess-Manning says.

The message was not lost on four-year-old Rosetta, who asked during the writing of the book, “Mummy, will I ever stop having problems with eating?”

Ms Burgess-Manning says it was then that she realised she had communicated this uncertainty over outcomes through the book to her daughter. “It gave me the opportunity to talk to her about her future – and this is something I hope the book will enable other families to do too.”

Earlybird was written in collaboration with illustrator Jenny Cooper and is also available in Te Reo Māori under the title Te Manu Moata.

Support from the Wright Family Foundation will allow Earlybird (created by The Champion Foundation and published by Kōtuku Press) to be gifted to families with premature babies born from the beginning of this year.

The book is also available for purchase from https://www.neonataltrust.org.nz/products/te-manu-moata-earlybird