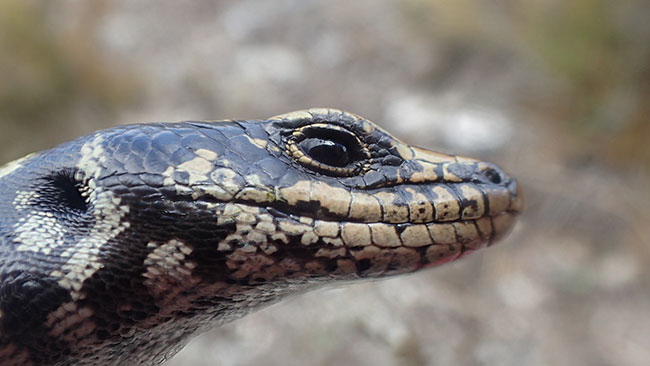 A University of Otago student is taking science into people’s homes to help increase understanding of the endangered Otago skink.

At one of the last remaining strongholds for the striking black-and-gold Otago skink near Macraes, Mx Virens set up cameras to take a photo a minute over a period of four months.

In combination with the analysis of detailed weather records, data obtained from this crowd-sourcing project will be used to determine how weather influences the skinks behaviour. 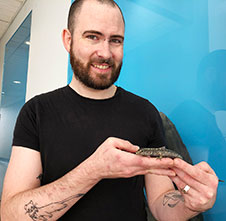 Mx Virens says research on lizards internationally suggests that weather changes can influence the amount of time that lizards are active which can impact population fitness, and he expects similar results for the Otago skink.

“I am hoping that these data will help me construct and validate models used to predict effects of climate change on skink behaviour,” Mx Virens says.

“Ultimately, I’m hoping to predict whether future climates could result in an increase, or a decrease, in emergence activity of these skinks in Otago, and over what time frame.”

The research’s supervisor, Professor Alison Cree, says Mx Viren’s novel approach and use of technology has allowed the research to blossom in new directions, and will provide important baseline information for the endangered species.

“Unfortunately, reptiles are often overlooked or misunderstood. The reality is that they have impressive and highly sophisticated ways of using solar energy to function, so Jo’s work engaging the public in the research may help break down some negative perceptions,” Professor Cree says.

Mx Virens says people often want to be engaged with science but it’s not always accessible, which guided the decision to utilise a citizen-science approach with the research.

“Obviously the crowd-sourcing website is global, but we would like to engage locals and give them an insight into our work with the region’s wildlife, and also the opportunity to be involved,” Mx Virens says.

While the Otago skink is not commonly seen in the wild, Otago locals may be familiar with the species which is present at Orokonui Ecosanctuary.

Analysing the time-lapse photos does require a level of concentration, but Mx Virens believes contributing to the project will be rewarding for volunteers as their skill at spotting the skinks will increase with practice.

“I think sometimes the science that contributes to the conservation of endangered species isn’t easily accessible to the public,” Mx Virens says.

“The crowd-sourcing Zooniverse website allows people to participate in research and also interact with researchers through message boards hosted by the platform.”