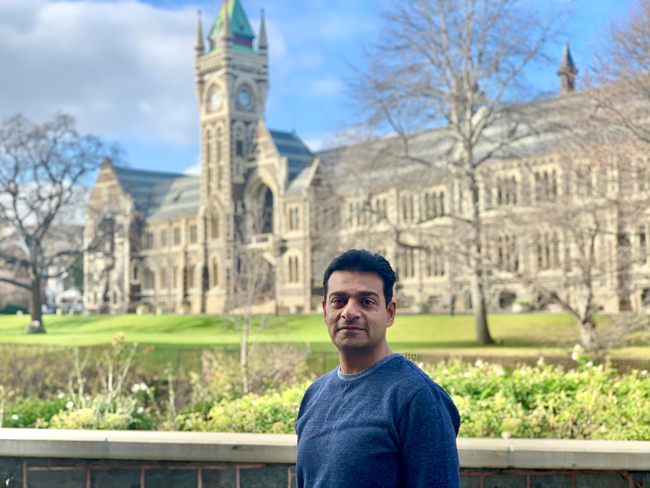 Otago School of Pharmacy's Dr Mudassir Anwar, who is contributing to a global web-based tool Your Covid-19 Risk.

How did a Dunedin-based pharmacy lecturer end up running the Pakistan arm of a global COVID-19 risk-assessment tool?

For Dr Mudassir Anwar it came down to connections, experience, willingness, and Urdu.

The web-based tool, called Your Covid-19 Risk, is being rolled out around the world – including New Zealand. It helps estimate the additional risk people may be putting themselves and those around them at of contracting and spreading the virus.

Those additional risks involve things people have some control over – like washing hands, maintaining social distance, and staying at home.

"We were basically working day and night - I was working his night and he was working my night."

The global project is being rolled out by a team of experts and volunteers from 35 countries. It has now launched in several countries, with many more to come.

While Dr Anwar is on the New Zealand project team, he says chairing the Pakistan team was a “fabulous” but strenuous experience.

A lecturer at the University of Otago’s School of Pharmacy he was born in Pakistan and his grasp of Urdu – the national language and one of the two official languages of Pakistan – was needed.

“The first thing I had to do was to find another team member to share the workload. Luckily, I knew Tauqeer Mustafa, a Public Health pharmacist from Pakistan who joined me in this fast-paced project.

“It was really good having someone at the other end of the world because when I used to hand over a task to him in the evening – I would call it night because I often worked till midnight to finish the task for that day and get ready for the next day’s tasks – it was morning in Pakistan and he would spend the whole day reviewing and adding his bits. So, before I woke-up the task was completed!

“We were basically working day and night - I was working his night and he was working my night.”

Despite the workload involved Dr Anwar says he jumped at the chance to be part of such a project. His PhD supervisor at Otago, Dr. James Green who is currently working as a Senior Lecturer in the University of Limerick, Ireland, emailed explaining the project.

"The core team, from the Netherlands, was looking for researchers who speak languages other than English ... I said ‘yes’ in a heartbeat as I felt the project was close to my heart and aligned well with my experience and expertise."

“He was stating the aims of the project and asking if I would like to be part of it. The core team, from the Netherlands, was looking for researchers who speak languages other than English, which would give this tool a wider coverage. I said ‘yes’ in a heartbeat as I felt the project was close to my heart and aligned well with my experience and expertise.”

Dr Anwar describes the tool as “easy to use”.

“It takes you through a series of questions and, based on your responses, it estimates your risk of contracting and spreading the virus. It’s free and if you want to use it, you just need to spare a few minutes and that’s it.”

Although New Zealand has had success against the virus, it is still very much a pandemic in many other countries, Dr Anwar says.

“We also need to be vigilant here, especially once the borders are opened and people from all around the world start visiting New Zealand. The tool will be a reminder for us to act and behave responsibly.”

The tool has allowed the team to not only help people consider their own safety, but also consider the safety of their loved ones, Dr Anwar says.

“We all do care about our loved ones, often more than ourselves. And this tool not only gives you an estimate of your risk of contracting the virus but also the risk of you spreading it to your loved ones.

“Based on that, it tells you in the form of a ‘gauge’ who you should try to protect more; yourself or your loved ones. So, I would say be honest when you use the tool, take care of yourselves and only then you will be able to protect your loved ones.”

It’s that attitude, that ability to use his education to help others, that attracted him to pharmacy in the first place, Dr Anwar says.

“Above all, being a pharmacist means you can really make a difference in people’s lives by being an expert on medicines. And there is such a wide variety of career opportunities. As a pharmacist, you can work in a myriad of settings such as the pharmaceutical industry, marketing, hospitals, community pharmacy, public health organisations, nursing homes, policymaking, universities, research organisations. The list goes on and on.”

"Having been able to help people ... through this tool, gives me a sense of pride and satisfaction. However, ultimately, it’s people’s choice whether they want to defeat the pandemic by modifying their behaviour."

Dr Anwar is currently writing a grant to identify and address the issues faced by refugees in their quest for health-seeking, and how the pharmacists’ skills and expertise can be utilised to improve refugee health.

“I am also part of a project aimed at the New Zealand public’s demands and expectations from pharmacists.”

Dr Anwar was born in a small town called Wah Cantt, almost 40km from Pakistan’s capital city, Islamabad. He describes his original home town as “one of the most beautiful, clean, well planned and disciplined cities of Pakistan, with the highest literacy rate in all of Asia, effectively 100 percent”.

“The word ‘Wah’ actually translates to “wow” or “how amazing” in English.”

The name has its root in the Mughal Era, Dr Anwar explains. The Mughal Emperor Jahangir was searching for a place to stay, along with his army, en route to Kashmir.

“After a little search they found this beautiful place with a natural spring and breath-taking scenery, upon which the king loudly said ‘Wah’. Since then this place is called Wah.”

Knowing his work from Dunedin is now helping people in Wah Cantt leaves a feeling of pride and honour, Dr Anwar says.

“Having been able to help people in my first home, Pakistan, and my second home of New Zealand through this tool, gives me a sense of pride and satisfaction. However, ultimately, it’s people’s choice whether they want to defeat the pandemic by modifying their behaviour.”