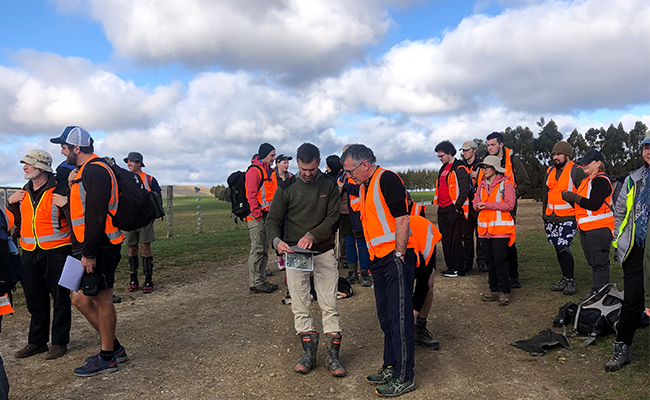 Some of the 50 volunteers on Friday, 9 September getting ready to head out into the field and search for the meteorite.

The search has been called off, but the mere possibility of a meteorite falling on Otago land has still got Otago scientists incredibly excited.

Since a fireball shot through the Otago night sky on 28 August – it was recorded travelling at about 15 km/s before slowing dramatically to 3 km/s before blinking out of view somewhere west of Mosgiel – dozens of volunteers have been hunting for it.

To no avail more than 120 people scoured private farmland over three days in an area narrowed down by members of meteor tracking network Fireballs Aotearoa, with help from other scientists abroad who are a part of the Global Meteor Network (GMN).

Palmer coordinated the search with help of his colleagues, Thomas Stevenson, Nadine Cooper, Mia Boothroyd and several people from the Otago Museum.

He assisted his PhD supervisor, Geology department Associate Professor James Scott, in installing 17 cameras to track the trajectory of any meteors that might fly through the Otago night sky.

The geology department received a grant which paid for the cameras. 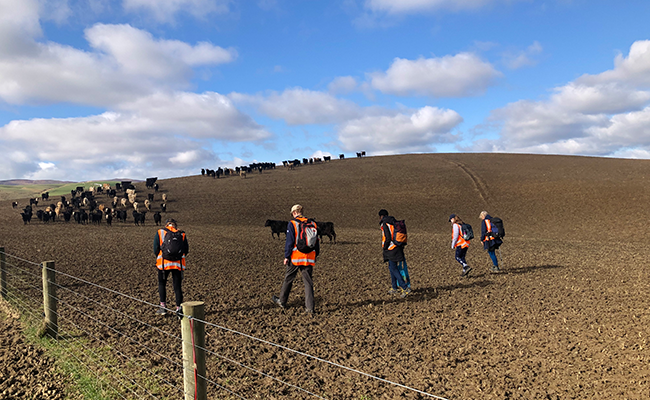 Volunteers worked in groups to search different areas of a privately owned farm, including a paddock with cows.

The fireball was spotted by three of the 17; one in Oamaru, one at Beverly-Begg Observatory (BBO) and one at Dunstan High School, Alexandra. These three were installed between July 18 and 29.

Palmer says they thought it would be at least a year or so before they would detect something worth looking for.

But it only took about six weeks before something showed up.

“Having a meteorite land 40 mins drive out of Dunedin and knowing our research group could be the first to investigate it, is super exciting,” Palmer says.

The first day of searching was based on the initial model the GMN released, but that area ended up being about 500 meters to the west of the final modelling which took in the rock’s dark flight stage.

Since the meteorite remains unfound, it’s still not clear how accurate either of the models are, Palmer says.

The area of land being searched on days two and three was about 500m x 2km in size. 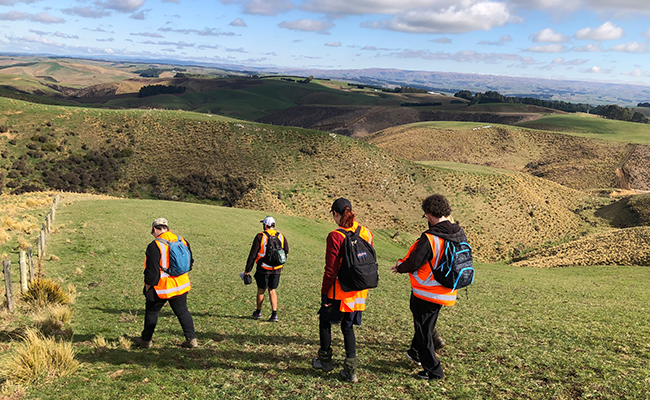 Some of the volunteers making their way through a paddock.

“It doesn’t sound like much, but you have to factor in the variable terrain - swamps, shrubs, tussock lands - and that the best-case scenario is that we are looking for a 10-20 cm diameter hole in grassland.”

A total of 120 people searched over the three days for the meteorite. Each day, the volunteers were split into groups of about seven people, and each group was given a designated zone to look over.

“The idea is that the search party is arranged into a line which sweeps across the field at a steady pace and individuals in the lane are spaced such that their fields of view overlap slightly.”

The volunteers were instructed that they are looking for either a hole in the ground, as the meteorite could be buried up to 1m deep or looking for a dark rock somewhat embedded in the soil.

“If it were obvious, I think it would have been found already. It is also possible that it fell outside of our search area.

“Maybe the farmer will stumble across it but that would require quite a bit of luck.”

Associate Professor Scott says the fireball was first spotted by two Southland based cameras belonging to Bob Evans, a Fellow of the Royal Astronomical Society of New Zealand. 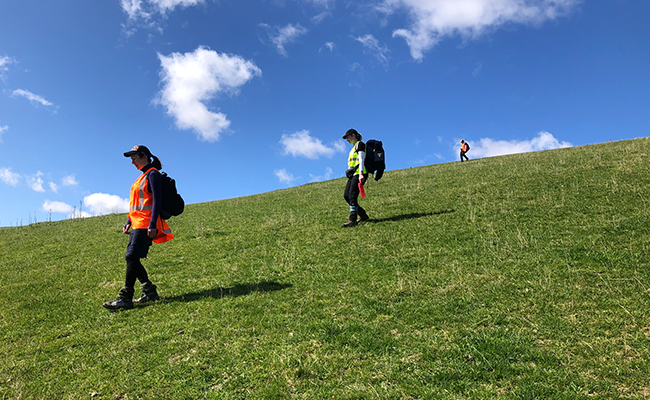 The volunteers were instructed to walk in lines, sweeping their eyes back and forth across the ground as they moved forward.

A grant from the Curious Minds Participatory Science Platform, administered by the Otago Museum, enabled the University of Otago Geology Department to purchase, build, install and maintain the 17 cameras.

“It was entirely aimed at discovering Otago’s next meteorite, and linking with schools to do this, to advance Earth and space science. Without the Geology department, the Museum and the funding agency, there would be no search at all.”

He says the Alexandra and BBO were best placed for working out the ‘strewn field’ – where the meteor might have landed, because they caught the meteor as it entered ‘dark flight’ – blinked out of view.

Associate Professor Scott’s understanding that if a meteorite is found on private property, it legally belongs to the landowner, but if it’s found on public property, then it’s “finders keepers”.

Meteorites cannot be sold without some form of registration that enables the person to sell meteorites – he is unsure what that process looks like – and cannot be exported without permission from the Ministry of Culture and Affairs.

His hope is that if anything is found it is donated to science.

“We intend for it to go to the Otago Museum for curation, who will give some to Otago University for characterisation.” 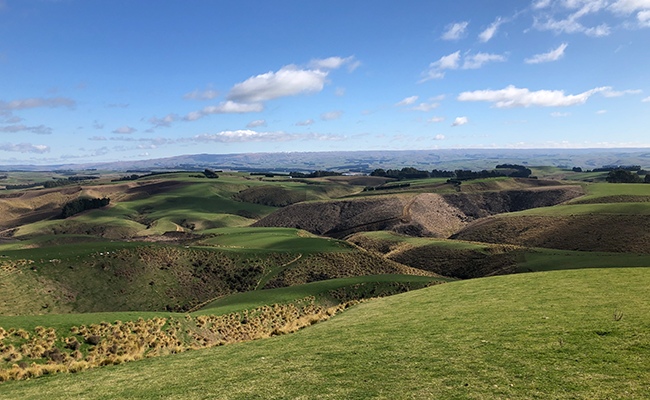 The view from the top of one of the paddocks being searched.

What is a fireball? And why is it so exciting?

A fireball is an especially bright meteor. Rocks travelling through the atmosphere at the front of a meteor are called meteoroids. Once they hit the ground, they become meteorites.

Big ones tend to vaporise, such as the one that killed the dinosaurs, and small ones tend to burn up, Associate Professor Scott says.

As meteors travel through the atmosphere, they melt, usually losing more than 75 per cent of their mass. This mass ionises gases behind it which gives the fireball it’s bright tail.

As the meteoroid slows down, it cools down, and loses its tail before entering dark flight.

At this point, winds buffet the rock off fireball course. For scientists to work out the dark flight of the Otago fireball, a key piece of information was an up-to-date set of wind data from MetService.

When the meteoroid enters dark flight, the melted shell crystalises and gives it a black ‘fusion crust’ which is made mostly of glass. The fusion crust is only several millimetres thick.

“If the meteorite were chipped, we’d see a totally different colour on the inside.” 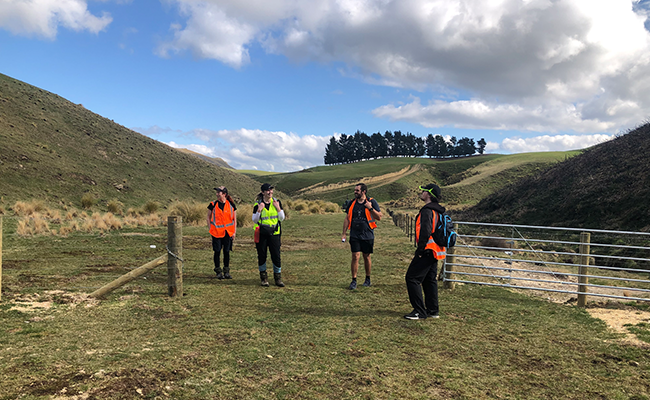 Volunteers are made of star dust.

Meteorites are important to science because they represent the building blocks of asteroids, moons and planets, Associate Professor Scott says.

Most hold records of history, billions of years old, having formed just after the Sun at 4.5 billion years ago.

That history includes information about the gases that the solar system formed from, how it melted in places, how the gas cooled, where the water was partitioned, and then formation of the asteroid and subsequent collisions in space.

“So, if we want to better know how planets formed, then these rare bits of space that did not get incorporated into the larger planets are scientific goldmines.”

Some meteorites carry carbon, which means carbon on Earth comes from condensation of carbon in the Solar Nebula gas which was followed by the formation of planetary bodies.

“So, even us, today, originated from equivalent material that is found in a meteorite. Yes, we are made of star dust.”

Nine confirmed meteorites have been found in Aotearoa New Zealand in 160 years. Two of these were seen falling – one in Mokia and one in Auckland. The Otago meteorite would be the third to have been seen falling.

“Most have been found by accident, and most by farmers in their fields.”

He says three to four meteorites land on Aotearoa New Zealand a year, usually the size of a fist. Most of these are unobserved or land in areas which are inaccessible.

People can join the initiative via www.fireballs.nz