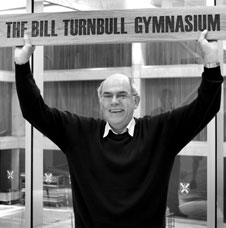 When a visionary, dedicated person creates innovative recreation concepts and dazzles architects with his ingenious, practical designs, it is fitting that Bill Turnbull has the 02 Gym at the new state of the art Unipol facility named after him.

After more than 19 years of service, Bill, as Manager of Unipol and from 2006 as Manager of Recreation Services, has been given this enduring recognition by the University of Otago. Even after Bill's retirement in 2009, he acted as a consultant during the design and construction phase of the new 5,000m2 Unipol facility at the University Plaza at Forsyth Barr Stadium which opened on 23 January 2012.

Anecdotes abound. We are lucky to get the 'inside goss' from our physedder Daniel (Dan) Porter BPhEd 1994, BCom 2002, PGDipPE 2008, MPhEd 2011 who is now the Unipol Recreation Services Manager.

Recounting Bill's contributions over the years, Dan says "After their Otago based studies, Bill and wife Alice did their OE in Canada, both teaching and studying. Bill graduated with a Masters Degree in Physical Education while he was overseas. His degrees hung on the wall when you entered his office. Bill believes strongly in knowledge, ideas, skills and learning.

In 1990 Bill was appointed Manager of Unipol and given a limited budget. He would frequently attend auctions bidding for punching bags, pool tables and weights equipment, gathering anything to bring about student recreation. The facility still benefits to this day from the resourcefulness of Bill's efforts in the early years.

The old Unipol didn’t have any electronic cardio equipment. We were so excited the day the first treadmill turned up. The advancement of a cardio room at the old Unipol was Bill's idea.

Bill has had a major impact in the development of our new facility, probably a massive understatement. I remember my first day at work. Bill met me at the door and it was not long before we were mulling through plans to extend the old Unipol building sideways, longways, downways, upwards and anyways possible.

He communicated his ideas to most people and would gladly debate the pros and cons. He was always thinking ahead, a complete visionary. However, with vision comes a consequence. There were many days when I would be on the other end of the tape measure and Bill would be calculating the dimensions of a badminton, netball, basketball and volleyball court.

A number of Bill’s ideas have been generated from his Canadian experiences. Bill pioneered the concept of ‘drop in’ or casual recreation which has now become embedded into how things are done around here.

Another pioneering concept of Bill's was that of intramural or co-rec sport, what we now call 'Social Sport' or 'Sport for Fun'. During the early days of social sport Bill had over 350 teams playing on a weekly basis in a Dunedin social volleyball competition, utilising almost every single piece of gym space that existed. At Unipol there were 96 touch teams playing touch on Logan Park. Bill and I would mark out these 18 touch fields by putting rope out. We became so efficient that we trained the referees to pack up their fields in a certain order. It was an amazing experience to be with someone who had an attitude of always wanting to make it happen. Bill's philosophy was we should never turn someone away and, if we had to, offer them an alternative experience.

A remarkable stat about Bill is that he didn’t have a computer in the early years at Unipol. He was the last one in the building to get one. When he did get one it was like a duck to water in terms of how this tool could improve the way things were done. Bill could write excel sports draws and mortgage tables in his sleep.

Bill is an intergenerational planner. I was and am continually amazed at the detailed plans. Only once did I see these plans come unstuck and even then it was not acknowledged as a failure, only an opportunity.

The ‘Bill Turnbull Gym’ is a good example of Bill's ingenuity. We were having trouble fitting the aerobics stage into the wall as we had not been left much cavity space. The challenge was to design a stage high enough so that instructors could be seen from the back of the class and still be set up and packed up in 2 to 3 minutes.

We couldn’t think of a solution until Bill said, 'You know those trucks that have the hydraulic tailgate that drops down, that’s an aerobics stage.' I remember saying to Bill, 'Are you sure that will work?' Bill's reply: 'Absolutely!' Bill had already designed one of these in the old Unipol building. It was the reverse of a garage door, except it dropped out front ways. 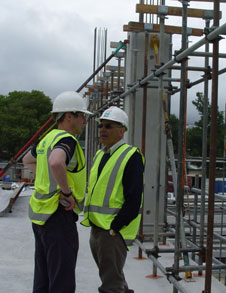 The 'Bill Turnbull Gym' is a truly multi-purpose space for students to use and has a "magic dimension" of 24m x 32m. The lines on the gym floor are laid out in a priority statement to reflect the dominant activity and also to allow other activities such as badminton, netball, volleyball, aerobics and basketball to be played. There is a drop curtain to have aerobics on one side and volleyball on the other. Flexibility is so important.

If there was a take-home message regarding the design of a building it is to communicate frequently. We always had productive discussions. Bill probably refers to these as indoctrination. There is no greater pleasure than seeing the different spaces being used for different activities the way it was planned.

Having Bill at the architects' meetings, the architects quickly knew they weren’t dealing with a novice. Bill would have them hanging off everything he said then launch into a story which reinforced what we wanted to achieve. Bill was committed to seeing this project through. The design process was intensive and having Bill there was fundamental to the outcome.

At one memorable architects' meeting Bill extracted the whiteboard marker from the architects and proceeded to change their design, not only solving their problem, but asking them for some commission as well. You should have seen the architects' faces. Priceless!

Bill has an amazing knack of making work fun. As Jamie Cargill, the project manager for this building stated 'Having Bill around is infectious.’

In reality, the new UNIPOL building was not a 24 month design process. This was a series of ideas that have been tested and re-tested under the old Unipol philosophy. It was almost as if the first 20 years were a testing phase until the purpose built Unipol appeared on the scene."

With some 4,000 visits per day by students and staff to Unipol, Bill's legacy seems to have been endorsed. Thanks Bill.

P.S. Bill has been nominated for a University of North Carolina Greensboro School of Health and Human Sciences Alumni award.

Thank you to the Phys Ed School for supplying this article from their bi-annual alumni newsletter.