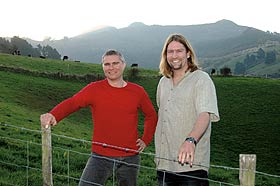 Franz Ombler (left) and Associate Professor Paul Hansen:
"We have a generic solution to any problem that involves ranking or allocating resources."

Making important decisions often involves a whole range of criteria – and the more information you have to consider, the harder it can be to find an answer.

So it's no surprise that decision-support software is coming into its own. Since 2003, 1000Minds software has been helping people and organisations to make decisions in a wide range of areas. And, in the last year or so, things have really taken off.

The idea for 1000Minds originated in the mid 1990s when Associate Professor Paul Hansen (Department of Economics) was trying to find the best way to prioritise patients for surgery.

"I had a 'eureka' moment while on sabbatical in Sweden in 2001 and then worked on it with Franz Ombler who, amongst other things, is a great software developer. Now we have a generic solution to any problem that involves ranking or allocating resources," says Hansen.

The software has patents in New Zealand, Australia and the US, with Canada in the pipeline, and has won two innovation awards and reached the finals of other national and international competitions, most recently in partnership with the University for creating "Otago Choice" (on the University's website www.otago.ac.nz/otagochoice), which helps prospective students to choose courses based on their personal preferences. The tool has been used 50,000 times in the two years it has been available.

1000Minds currently has about a dozen commercial users, across six countries. It has been used continually since 2004 by New Zealand's Ministry of Health for prioritising patients for elective health services – and since 2008 in Canada for the same purpose. In the UK it is used for prioritising social assistance to people in need. The US Department of Defence bought a licence – but hasn't disclosed how it's being used.

Hansen and Ombler offer free use for approved researchers and students. Worldwide, 15 universities and research organisations are using the software, with some 80 projects, including PhDs and masters' degrees, completed or under way.

"The greatest thing for me is the number of researchers who are using it," says Hansen. "There's some great research coming out of Otago using 1000Minds. People are really picking this up and finding cool applications."

There's some great research coming out of Otago using 1000Minds. People are really picking this up and finding cool applications.

Hansen, who has been on sabbatical in India, is particularly excited about a project to discover the most suitable grasses and stock to farm in particular conditions. It's led by Dr Peter Fennessy, a consultant with Dunedin-based AbacusBio Ltd and a member of Genetics Otago.

"Peter and Otago PhD researcher Tim Byrne are using 1000Minds to discover the most desirable genetic traits to breed in grasses for Australia and in sheep for Ireland," says Hansen.

"I didn't appreciate just how vital this kind of thing was until I saw what was happening in India, where the green revolution has saved hundreds of millions from starvation by developing rice and wheat strains best suited to local conditions."

In the US, 1000Minds is the engine for a survey to help the community of Martha's Vineyard to decide on an acceptable location for a proposed offshore wind farm. Renewable energy co-operative Vineyard Power believes the community living near any future turbines should have a say in where they are installed. 1000Minds helps make sense of the many issues involved.

New users of 1000Minds are signing up on a daily basis, says Hansen.

"It may sound corny, but it's really nice to have developed something that can help in so many areas. The key thing is that people are using it and that's fantastic."