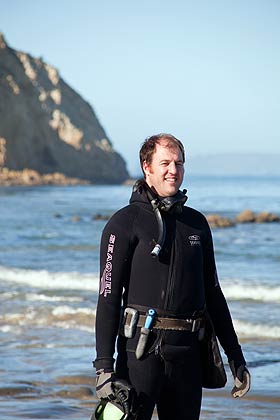 Dr Chris Hepburn
“It has taken two years to force a change in fishing regulations and that is a direct result of the work we’ve done in conjunction with the community.”

A team of scientists from the University of Otago is making big waves on the East Otago coast, their research a key factor in forcing a change in fisheries legislation after just two years of work.

Hepburn secured Foundation for Research, Science and Technology funding through a Te Tipu Putaiao postdoctoral fellowship for the three-year project, which concludes in April 2011, under the broader Te Tiaki Mahinga Kai umbrella. It draws on the skills of 10 postgraduate students working in a diverse range of disciplines, including marine ecology, physiology and genetics.

“Most of the work we’ve done is at Karitane, a historically important fishery for tangata whenua that has been managed as a taiāpure since 1999, combining recreational, commercial and customary fishers,” he says.

The research group’s main role has been to provide local communities with basic ecological information on the fish species living along their shores, their numbers, size and growth rates. The taiāpure was originally introduced to protect the local paua fishery and work by the researchers quickly confirmed what the kaitiaki (guardians) of the fishery suspected was happening.

Hepburn and his colleagues found that the size and abundance of paua was very different among reefs along the East Otago coast and that fisheries regulations applied across the whole country did not protect fisheries within the taiāpure.

As a direct result of those findings, the East Otago taiāpure management committee has succeeded in introducing a new suite of fishing regulations for the coast between Potato Point and Cornish Head from October 1, 2010, including a reduction in bag limits from 10 to five paua a day.

The research group’s main role has been to provide local communities with basic ecological information on the fish species living along their shores ...

The Huriawa Peninsula will be closed for paua fishing for at least two years to allow it to recover because researchers found only one per cent of paua in that area were above the legal minimum size of 125mm. Targeting this under -sized stock would further deplete the resource, they concluded.

“It has taken two years to force a change in fishing regulations and that is a direct result of the work we’ve done in conjunction with the community,” Hepburn says.

Some fisheries were well beyond sustainability, he says, and the focus should now be on restoration through empowering and educating local communities and kaitiaki to monitor and look after their resources themselves.

Hepburn regards taiāpure and mātaitai as useful management tools because they can provide fisheries management on a “reef-byreef” basis. “We must manage our fisheries at scales relevant to the species being fished. Community involvement is probably the only way to achieve this.”