A little look at the big picture 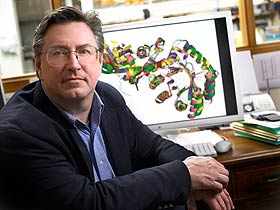 X-ray technology dates back more than 100 years and has generally been used to give the big picture, looking at bones and organs.

But Professor Krause, Director of the University of Otago's Webster Centre for Infectious Diseases and a structural biology researcher in the Department of Biochemistry, is turning the beam on individual proteins to find ways to attack the world's worst infectious diseases.

Krause says that understanding their molecular structure is a key part of drug design. "For example, antibiotics are small chemicals that bind to a class of molecules called proteins and these proteins are sort of molecular machines that run viruses and bacteria."

They are hugely varied and Krause uses a technique called X-ray crystallography to determine their three-dimensional structure. It involves condensing the protein until it forms a crystal, then x-raying it to help identify its structure and surface features.

"I have a vision that New Zealand could be involved in a major way in the development of new pharmaceuticals, treatments and vaccines."

"The proteins have active sites where their business is done. So, if you can get the structure of the active site, you can get something that will complement it and bind to it – and that can be a drug." Krause, whose state-of-the-art laboratory was set up with the help of a significant gift from American philanthropist Dr John Thrash under the University's Leading Thinkers Initiative, likens it to a nearly complete jigsaw puzzle. If you can come up with a drug compound that fits the last space, then the piece that is supposed to go there is blocked, leaving the puzzle incomplete. "By binding these things to them, it will stop the proteins performing their normal function and stop the virus from acting."

There are two ways to find active compounds, he says. You can screen a million compounds to see if any actually stop or inhibit the enzyme, or you can use structural biology to establish their three-dimensional structure and then screen likely candidates to see if they fit. "Once you identify inhibitors, you figure out if any of them can work as drugs. Can they be absorbed in the stomach? Are they broken down? Are they toxic? Then, if you get something that looks like a drug, you test it against an animal and then you test it in people." Krause says antimicrobial drug development has fallen behind in recent decades, following a golden age in the 1950s and 1960s when the main classes of penicillins and erythromycins and sulphur drugs were developed.

Drug companies have become reluctant to finance new classes of antibiotics because of the development costs – sometimes more than a billion dollars – and the risk that rapidly developing drug resistance could ruin their investment.

Unfortunately, infectious diseases have not stood still and there are now four main issues: emerging diseases without treatment, re-emerging diseases that had seemed quiescent, increasing virulence in ordinary bacteria and antibiotic resistant bacteria, viruses and fungi. Krause believes academics can play a huge role in developing new drugs. The University of Otago's response has been to establish the Webster Centre for Infectious Diseases. Named in recognition of Professor Robert Webster, an Otago graduate who is an international expert in influenza research, and his wife Marjorie, it brings together infectious disease researchers from around the University together with scientists from other New Zealand universities, and CRIs such as AgResearch, ESR (Environmental Science and Research) and IRL (Industrial Research Limited). "We have epidemiologists who can spot trends in the spread of disease in time to formulate a logical plan of action. We have microbiologists and immunologists who are working with the actual bugs and organisms to understand how they cause disease. Other scientists like biochemists, structural biologists and chemists then dissect these organisms at the molecular level to design effective treatments, and finally we have practitioners who deliver care directly to patients in hospital. This gives us the potential to go full circle," he says.

"Further, the centre includes talented scientists in pharmacy and pharmacology who are able to test new compounds. We even have experts in formulation of these compounds into pills or tablets, which is quite rare outside of industry."

Krause says there is enormous scope for the University and the Webster Centre to identify targets and find partners to develop them.

"It usually takes about $50 million to go from the target all the way to making something that is quite a tight inhibitor. Then it's about $800 million to a billion dollars to take it all the way through all the hurdles to get it approved. So you need some partnering to do that," he says. "I have a vision that New Zealand could be involved in a major way in the development of new pharmaceuticals, treatments and vaccines. The ability to directly impact the health of others in such a positive way would be a source of great satisfaction for the scientists working in New Zealand as well as a potential source of significant revenue for the country."