From academia to action 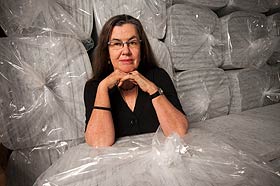 Professor Philippa Howden-Chapman
"We wanted to generate new knowledge that would actually be used. That meant the studies had to be developed in a politically inclusive way …"

Over the last decade Professor Philippa Howden-Chapman and the team from He Kainga Oranga/Housing and Health Research Programme (Public Health, Wellington) have helped revolutionise how policy-makers and the public see the average New Zealand house. Although researchers suspected our housing stock was not up to OECD standards for a cold, wet climate, the hard data about the negative health impacts were not available and it was a neglected area of government policy.

Howden-Chapman's healthy housing research programme has changed all that. Not only did He Kainga Oranga show that thousands of people in this country live in "wooden tents", but that cold, damp and inadequate housing is making New Zealanders sick and costing the country millions in additional health care.

"We were surprised, as researchers, at just how cold our houses are. The indoor temperatures in winter are, more often than not, colder than houses in Northern Europe and Siberia, where winters are freezing," she says.

Howden-Chapman's healthy housing studies focused the nation's and politicians' attention, first by demonstrating the specific gains in health and energy from retro-fitting insulation, and then by showing the broad gains from improving home heating.

The positive health results of the first Insulation Study were featured as a cover story in the prestigious British Medical Journal (BMJ), with three separate editorials. The second Heating Study was also published in the BMJ, influencing public debate and reinforced by Howden- Chapman's willingness to talk to policy-makers and the media.

Subsequently, both the Labour and the new National Governments, with strong support from the Green Party, adopted the fundamental findings of these two intervention studies and applied them at policy level. National has committed to spending $323 million over the next four years, with the expectation that 180,000 New Zealand homes will be retro-fitted with insulation. This success is largely the result of a carefully considered strategic research process by Howden- Chapman and her colleagues. They were interested in framing housing and health problems as solution-focused research, so the resulting evidence could be translated into policy changes. "We wanted to generate new knowledge that would actually be used," she says. "That meant the studies had to be developed in a politically inclusive way, an approach which is well developed in Northern Europe.

"It goes back to the 19th century, when the disciplines of social science and public health were first developed, to gather evidence needed to improve the health of the populations crowded into burgeoning industrial cities.

"The vital factor is that all these different political parties and groups found some aspect of the research which accorded with their views and meshed in with their policy at the time." So, it is crucial to think holistically about the social and political contexts in which public health research is undertaken, as well as to understand the complexity of public/private funding. The fundamental goal remains to improve population health and to ensure those on low incomes do not miss out. Evaluating the policy outcomes and monitoring who is benefiting are also important parts of Howden-Chapman's research agenda.

"There's no use having a solution or outcome in mind and then looking for the problem," she says. "We consulted with a very wide range of policy experts and agencies such as EECA, the Ministries for the Environment and Economic Development, Treasury, district health boards, trusts and private companies before starting, so these groups and communities accepted our results and have been behind the policy developments."

The healthy housing studies focused attention, first by demonstrating the specific gains in health and energy from retro-fitting insulation, and then by showing the broad gains from improving home heating.

Public awareness of the programme was also developed early, with major efforts made to get stories about the healthy housing study into regional media as well as on the national news. Private sector involvement was critical because of the costs of interventions in such large studies – relatively expensive products like heat pumps and wood-pellet burners. "Companies contributing to health research can very quickly make a huge difference to people's lives, as well as making an important contribution to generating new knowledge."

Also important was the framing of the research so that it focused on poor housing as the determinants of health and well-being – the focus was not on low-income individuals or disadvantaged families.

"We were determined not to make this a finger-pointing exercise, victimising individuals or particular groups in society," Howden-Chapman says.

One of the most interesting and positive things about the research process was the way the political potential of the healthy housing studies gained traction over time.

"It's all about maintaining credibility, public awareness and momentum – a logic of cobenefits. I strongly believe in advocating from research results to maintain momentum and funding, even if they are interim, as the lead times on trial results are so long.

"Advocating from scientific results is important for politicians too. In difficult economic times, it's much more effective to argue for new policies if they're supported by robust and internationally credible research, especially when it's backed up by convincing cost-benefit studies."