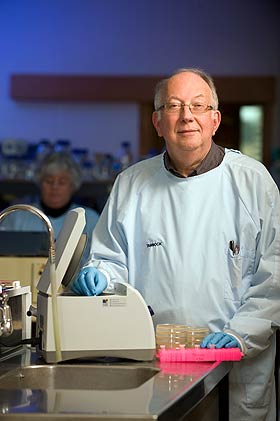 Professor Gerald Tannock
"Understanding this complex ecological web will help us construct a blueprint of the healthy bowel, and could also assist in establishing the cause and effect of bowel diseases."

Professor Gerald Tannock fell in love with microbiology on his very first assignment as a trainee diagnostic laboratory technologist at Dunedin Public Hospital.

Later, when he attended university, he would achieve better grades in biochemistry. But the young student preferred microbiology's Petri dishes with their cultured communities to the tincture-filled test tubes of biochemistry. He preferred organisms he could see: real living organisms that often looked, he says, quite beautiful under the microscope.

These days – and Tannock laughs at the irony – microbiologists don't generally look at the microbes. Microbiology is now largely dependent on high-throughput DNA and RNA sequencing, a computer-assisted frontierland where entire communities of organisms are characterised using nucleic acid-based technologies.

Certainly this is true of Tannock's particular field – gastrointestinal microbiota – the vibrant, biodiverse communities of bacteria that live within the gut of all of us.

Scientists like Tannock estimate that there are 10,000 times more bacterial cells in the human large bowel than there are humans on Earth, comprising many thousands of species. Our microbial citizens are sometimes our friends – assisting our digestive processes, for example – and sometimes our foes, producing mutagenic substances or causing infections when they escape from the bowel. But mostly they thrive on the food we ingest and the slurry of mucus and epithelial cells shed from our intestinal wall, without causing us too much bother. Tannock's interest lies in understanding how these "commensal" guests interact with their environment – our gut – so that we might better understand their role in bowel health and disease. "The interactions that occur within the bacterial community and between the community, food components and host comprise a highly interactive matrix," he explains. "Understanding this complex ecological web will help us construct a blueprint of the healthy bowel, and could also assist in establishing the cause and effect of bowel diseases."

Over more than three decades, Tannock's research has made significant contributions to this endeavour, resulting in his considerable international standing. In 1996 he was appointed to a personal professorial chair at Otago and, in 2000, his contributions to science and technology were recognised with a Royal Society of New Zealand Silver Medal. In 2002 he was elected to Fellow of the American Academy of Microbiology, only the second New Zealander to receive this honour. "Gerald Tannock epitomises the consummate researcher who has devoted his entire professional life to the advancement of knowledge of his chosen field," says his long-time colleague Professor John Tagg. "He is perhaps a classic example of the widely-held ecological tenet that, when left undisturbed and provided with a modicum of resources, indigenous species can flourish brilliantly in their native environment."

Tannock's long-standing research interest has been the function and role of lactobacilli, bacteria that are widely used in the food industry and which lately have been found to have a moderating effect on the occurrence of eczema when administered in probiotic form to mothers-to-be and neonates. However, Tannock professes not to be interested in probiotics, but rather the "fundamental science behind it". He's interested in how things work.

A good example of this is his current focus on shifts in the composition of bowel microbiota and their implications for sufferers of chronic bowel diseases.

In Crohn's disease and ulcerative colitis, Tannock explains, researchers think there is a familial linkage – a genetic predisposition – to these diseases that involves a dysregulation of the immune system.

"The gut bacteria all have molecules associated with them called antigens that our immune system recognises and reacts to. Normally, our immune system might react initially to exposure to a new antigen, but then it learns the body isn't being harmed so it doesn't do anything more about it. "In other words, it realises early in our lives that the masses of bacteria in our gut are not pathogens and that they're not going to invade the tissues readily. So it shuts down the proinflammatory side of the immune system and the inflammation subsides.

"I think that in Crohn's disease and ulcerative colitis patients, that down-regulation doesn't occur, so the immune-related inflammation continues and becomes chronic." Tannock adds that this situation is further complicated by a "defective epithelial barrier" in the intestine – a "leaky" bowel wall.

"One theory is, because the bacterial antigens can move more readily through this defective epithelial barrier, bacterial antigens are turning up in the bowel tissue below the layer of epithelial cells. So the immune system thinks 'this is an infection, I've got to mop it up'. "In the case of a normal infection, the immune system probably would mop up the pathogen eventually and everything would go back to normal, but, because of this leaky inflamed tissue, bacterial antigens continue to come in because the microbiota is continually there and the inflammation continues."

Increasingly, however, Tannock has become interested in the microbiota present in our bowel at a much younger age. This is because he believes our bowel's immune programme may be determined at a very early age in a phenomenon referred to as "biological Freudianism". "According to Sigmund Freud, the social and environmental interactions that occur very early on in our lives make us the way we are. I can't help thinking that what's going on in the gut is a similar type of early programming – and it's like Freudianism because we don't know it's going on." Subscribing to this hypothesis permits the possibility of programming the bowel's immune regulatory system by exposing it early in life to certain bacteria in order to avoid immunologically-based bowel diseases. Consequently, Tannock's research team is involved in a project aimed at demonstrating the importance of a group of bacteria called bifidobacteria to the early programming of our immune systems.

Tannock has shown that bifidobacteria comprises up to 90 per cent of the total bacterial mass in a breast-fed baby's bowel, something he believes suggests its importance to our bowel's "set-up".

"What we've shown so far is that immune cells do respond in different ways to different bifidobacterial species," says Tannock. "It's preliminary work, but I think it's exciting."

Tannock is enthusiastic about the future potential for the science he has helped shape for the last four decades and to which he continues to contribute.

"Microbiology has become much more exciting than when I started out. We've realised that, in nature, there are something like 10 million different kinds of microbes and we've only ever cultivated and characterised in a laboratory 5,000 species.

"These microbes are living in very varied habitats and can carry out marvellous chemical transformations that have never been investigated. So there's this huge biotechnological capacity out there that is only beginning to be tapped. I think that's a pretty exciting prospect, to harvest this biochemical capacity that microbes have and put it to some kind of biotechnological use."