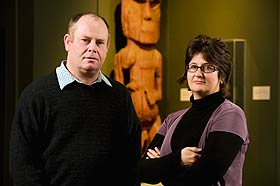 Associate Professor Richard Walter and Dr Hallie Buckley
Their aim has been to understand the nature of the Wairau Bar archaeological site and the way of life of its inhabitants.

A project to return ancestral remains to one of the earliest sites of Māori settlement in New Zealand is providing a rich source of data for researchers in the Departments of Anthropology, and Anatomy and Structural Biology.

The project involved reburying koiwi tangata (human remains) excavated by Canterbury Museum from the 1930s to the 1960s from Wairau Bar near Blenheim.

A team led by Associate Professor Richard Walter was appointed archaeological consultants for the project, with the Department of Anatomy and Structural Biology's Dr Hallie Buckley co-ordinating biological anthropology analysis of the skeletal remains.

Before the reburial took place in April this year, the archaeology team – comprising members of the Anthropology Department's Southern Pacific Archaeological Research Unit – conducted a detailed survey and excavation at the site.

"Our role was to find the appropriate places for them [koiwi] to be reburied, but, at the same time, to carry out research-based excavation," explains Walter, adding that the aim of the research side of the project is to understand the nature of the Wairau Bar site and the way of life of its inhabitants.

Walter says early archaeological investigations have shown the site is much larger than previously thought – about 11 or 12 hectares – and was probably only occupied for a short period, maybe for less than a century.

"And it looks like it had a very wide range of specialist activities taking place on the site – a lot of different manufacturing, like ornaments, different types of adzes, fish hooks, those types of things." Buckley's part of the project has involved re-evaluating the skeletal remains before they were returned to Wairau Bar and conducting ongoing research.

Buckley is a senior lecturer in the Department of Anatomy and Structural Biology. She is also a biological anthropologist, focusing on excavating and analysing human skeletal remains from archaeological sites in the Pacific Islands.

There are two levels to the team's research. One is macroscopic work – recording everything visible with the naked eye and studying health and disease from examining the surfaces of bones and teeth. The other is using stable isotopes to study aspects such as diet and migration patterns. Buckley says skeletal remains can tell us much about the people and the way they lived. "Basically, you can, from looking at the skeletal material, tell a story or reconstruct the past." Early results have confirmed the occupants of Wairau Bar were Polynesian, being strong, muscular, and well-built - physical characteristics revealed by the size and shape of the muscle insertions in their bones.

Wairau Bar is regarded as one of the most significant archaeological sites in New Zealand ... and provides conclusive evidence that New Zealand was settled from East Polynesia.

They were also suffering from degenerative diseases such as osteoarthritis, which Buckley says is common among many prehistoric people because of their strenuous lifestyles. And they had poor oral health, with evidence of caries and periodontal disease, probably a reflection of their diets having a sugary and starchy component – again not unusual among prehistoric people. The team has also found evidence of gout, which is consistent with other research on prehistoric Polynesians and is linked to the high incidence of the disease among Māori and Pacific Islanders today.

Regarding diet, archaeological evidence from the faunal remains excavated from the middens suggests the people of Wairau were exploiting a lot of moa, a wide range of forest and sea birds, as well as fish and shellfish. Although there is no direct evidence for the plant component of the diet, it is likely that they also had access to kumara and forest foods, such as karaka berries.

Dietary isotope work is examining the ratios of carbon and nitrogen in bone collagen to provide a quantitative assessment of these different marine and terrestrial sources of food. "So we can look at how much protein people were eating, how much of their diet was made up of terrestrial plant foods – how much they were reliant on horticultural food – and how much on moa and marine sources," says Buckley.

"They were generally a healthy people, but had evidence in their skeletons, bones and teeth which suggests that they had to work very hard to survive."

Isotope analysis of teeth will potentially shed light on migration, addressing the question of whether some of the people buried at Wairau Bar may have spent their childhood somewhere else. "This is potentially very important because the teeth of an adult develop during childhood so, if someone spent their childhood somewhere else, their teeth will reflect the geology of that place. We use strontium isotopes and trace elements, and they come from the groundwater, so basically the food you eat and the water you drink is all reflected in the teeth and the bone."