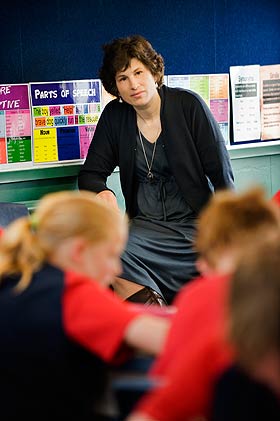 In 1996 when Sheila Skeaff began her PhD research on iodine deficiency she didn't imagine she'd still be investigating the same issue 13 years later.

The fact that she is, the senior lecturer in Human Nutrition says, is testimony to the inadequate response to the environmental iodine paucity endemic here in New Zealand. It also reflects the dearth of knowledge, worldwide, about the effects of mild iodine deficiency, a condition that affects most New Zealanders.

In contrast, the effects of severe iodine deficiency are well documented. These include large, visible goitres - excessively swollen thyroid glands - and, even worse, cretinism, a debilitating condition resulting in physical stunting and mental impairment.

As recently as the 1940s, goitre was common in New Zealand, indicating widespread iodine deficiency in our community. This deficiency is largely because the levels of iodine in most New Zealand soils - and thus in our water and primary foods such as meat, vegetables and dairy products - are very low.

Salt iodisation, intended to help increase the iodine intake across the population, was introduced in the 1920s, but in woefully inadequate amounts. It wasn't until 1939 that researchers correctly identified the amount of iodine required by various groups within the population and the level of salt iodisation was corrected.

While the problem has improved - goitre is rarely obvious in New Zealand these days, for example - Skeaff points out that even if people set the salt shaker out on the dinner table every night, the majority of New Zealanders are still likely to be mildly iodine deficient. This is, in part, because the amount of iodine required to meet people's daily needs, particularly if they are pregnant or lactating women, would translate into an unhealthy level of salt or sodium if that was used as the main iodine source.

Ironically, the widespread swing away from using salt because of the now well-known link between sodium and hypertension has had a negative effect on our iodine intake. Our increasing penchant for non-iodised sea and rock salt varieties, probably perceived as healthier options, is also a contributor.

Another confounding factor, says Skeaff, is all the sodium-loaded processed food we are eating in ever-escalating quantities: fast-food and pre-prepared goodies which comprise 75 per cent of our total sodium intake, but which do not generally contain iodised salt.

"The public is at the mercy of food manufacturers," says Skeaff. "The public can't control them, so if the public wants to do something about sodium intake, they cut out salt. Yet that's cutting out an important source of iodine."

Improving our understanding of the effects of mild iodine deficiency, Skeaff hopes, will help raise awareness of our need for iodine and provide a more informed context for the introduction of measures such as the iodine fortification of commercially manufactured bread, which took effect in October 2009.

The levels of iodine in most New Zealand soils – and thus in our water and primary foods such as meat, vegetables and dairy products – are very low.

In 2007, following the publication of a study on iodine supplementation among iodinedeficient Albanian children, Skeaff set out to assess how the intake of iodine in mildly iodine deficient New Zealand children impacted on their cognitive abilities.

Her research, conducted with colleagues from her own department and the Department of Psychology, involved a randomised, placebo-controlled, double blind trial on 184 children aged 10 to 13 years. The children were divided into two groups, the children in one group taking iodine supplements and the other a placebo. Both groups were given four different cognitive sub-tests at the beginning and end of the trial.

"Iodine supplementation was associated with significant improvements in performance on two of the four cognitive tests relative to the placebo, in particular the tests of perceptual reasoning or problem-solving," says Skeaff. "This suggests that iodine supplementation of mildly iodine-deficient children improves cognition and that mild iodine deficiency can prevent children from attaining their full intellectual potential."

Of course, finding out more about how the connection between iodine and brain cognitive function works requires further research. Skeaff 's next project will, therefore, investigate the impact of iodine supplements taken by pregnant women on the downstream cognitive function of their children.

In the meantime she recommends people eat sushi, eggs, dairy products and seafood - all foods that are good sources of iodine - and use iodised salt.