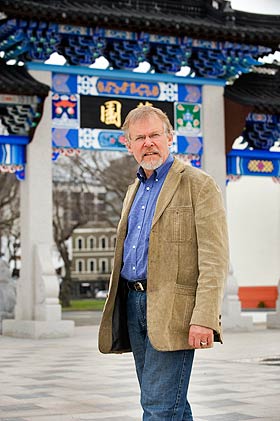 Dr Malcolm Cone
"China is the world's largest and most competitive market so, if we can succeed there and learn from that, then we can probably succeed anywhere."

A FRST-funded project is allowing business researchers to take a much closer look at how - and how well - New Zealand exporters are doing business in the key emerging markets of China and India.

One of the lead researchers, Dr Malcolm Cone, the director of the Asia Institute in Otago's School of Business, says the project has two main areas of focus. First, to ascertain the extent to which New Zealand companies value the intellectual property, or IP, behind their products and, second, how well service firms are performing in the eyes of their customers.

"Everybody knows when they are selling a bale of wool or sending a machine offshore, but what about intrinsic stuff – the IP behind the machine or the technology that creates the product?

"Obviously the ideas behind what New Zealand companies produce are the real value, but we haven't been measuring that," he says.

"Take the dairy industry, for example. Apart from the milk powder that goes offshore as a commodity, about 30 per cent of Fonterra's exports include additives that all have significant IP attached to them because of the science behind them."

The researchers are talking to traditional service industries such as tourism, banking, education, consulting and IT, as well as manufacturers, and asking how they get their IP offshore and how they integrate it into the systems of firms in India and China. "A surprising number of firms have got way past that," says Cone. "They rely on their own innovation to stay ahead."

Other solutions include joint ventures with overseas partners, wholly-owned subsidiaries, or simply relying on the strength of the relationships they have built, he says. The researchers have interviewed more than 50 New Zealand companies about these issues and are exploring questions about how trust and sustainability are built into relationships.

Cone says they have also begun talking to their clients and partners in China and India. "That's the valuable bit because we are going to get feedback from them as to how they view New Zealand companies' performance. "China is the world's largest and most competitive market so, if we can succeed there and learn from that, then we can probably succeed anywhere," he says. The study should lead to a number of positive outcomes. It will be useful to the team negotiating a free-trade agreement with India, and has become part of a project with the Ministry of Foreign Affairs and Trade and Statistics New Zealand to better understand the value of what New Zealand is exporting.

In addition, it is hoped that the information gathered could be used to create a business development training package to be offered to public and private sector organisations that work in these two massive countries. Seminars will also be run throughout New Zealand, providing feedback on which market behaviours of New Zealand companies lead to success and what could be improved.