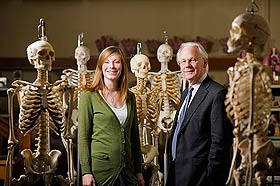 Maja Whitaker and Professor Gareth Jones In the second edition of Speaking for the Dead: The Human Body in Biology and Medicine they shine light on new ethical contexts and examine some of society's most sensitive debates.

Anatomy owes its legacy to the dead. The discipline has taught us countless wonders of the body: its detail and workings, the progress of age and disease, its response to medical interventions. Anatomy remains central to the study of medicine and the life sciences. Yet, despite a day job that involves dissecting corpses and preserving body parts, anatomists have been slow to address the ethical dimensions of their work, says Professor of Anatomy and Deputy Vice-Chancellor (Academic and International) Gareth Jones.

Which is a pity, he believes, because anatomists have much to bring to the philosophical table. Do our bodies have value when we die? Does the debate about when life ends help us understand when life begins? How should we use knowledge gained through unethical practices?

These are among the issues traversed in Jones's recently-released second edition of Speaking for the Dead: The Human Body in Biology and Medicine, co-authored with Maja Whitaker.

"Anatomists are well positioned to consider many of medicine's ethical questions," comments Jones, whose interest was aroused when asked to introduce ethics into Otago's medicine programme in the 1980s. "We worked in labs, surrounded by all manner of skeletal remains and preserved tissue samples, some very old, from different cultural backgrounds."

Ethics, it seems, was all around him. "Whose bodies were these? How did they come to be in our possession? What purpose were they serving? These same questions rise again and again throughout medicine, not only when we are dealing with dead bodies. It helps us consider all forms of human tissue and gives us a way of thinking about issues from organ transplants to stem cell research."

Indeed, such questions have recurred frequently throughout Jones's career. As a neuroscientist, Jones's research interests have long poised him at the interface of life and death. He has examined both the life-sapping properties of degenerative brain disease, as well as the moments of "brain birth" and, by extension, the moral status of early embryonic forms. He has published widely in science and ethics journals, exploring concerns such as "the need to balance research imperatives and the limitations imposed by ethical constraints on research using human patients and human tissue".

It's a career that has left Jones with a debt of gratitude for the human beings whose bodies have enabled the teaching and research that is carried out every day at the University. Where early anatomists relied on unclaimed bodies, it is now routine for people to bequeath their corpses for teaching and research purposes, and Otago's Medical School receives more offers of bodies than it needs. "It's an encouraging testament to the perceived value of science in our communities."

Further, for Jones, the giving of consent while alive clears enormous ethical hurdles, providing confidence that the deceased person's values, integrity and dignity are being upheld. Even still, challenges remain. "Overseas studies have required bodies to decompose under buildings. The effects of gunshots to the brain have been tested. Cadavers are sometimes preferred to crash-test dummies for simulating the effects of car crashes."

In these cases, best practice is to explain these wide possible uses to those indicating their wish to donate their bodies. Perhaps surprisingly, says Jones, "most people say yes".

"The use of real bodies in crash tests has led to key modifications that have saved lives. Most people who donate are motivated by a greater good. It does not necessarily follow that some treatments, such as dissection, are more dignified than others if in pursuit of a genuine scientific goal."

Despite the ethical premium philosophers may place on the wishes of the deceased, reality does not always work like this.

"Repeatedly, we see the wishes of the living take precedence over the wishes of the dead. This is not based on ethics, but on expediency," Jones points out. "The dead don't argue." This matters, says Jones. "Organs, especially kidneys, are needed in the thousands in New Zealand. When a family overturns a loved one's wish to donate, it is not a neutral act. In all likelihood, it denies someone a chance of a life-saving operation."

Simple steps could improve the system immensely, believes Jones. At the very least, he calls for "a nationwide database, where individuals could record their wishes for the avoidance of doubt and confusion, and medical administrators would have a better picture of the level of potentially available organs".

In this second edition of the book, Jones and Whitaker shine light on new ethical contexts, such as what happens when human remains are liberated from the dissecting room and posed, life-like, as baseball players and ballet dancers, in very public plastination exhibitions. Their work takes us into some of society's most sensitive debates, including the provision of life support for those in persistent vegetative states. The naturally high levels of non-viable embryos – embryo wastage – question claims that all embryos should be afforded the full rights to life of moral persons. Says Jones, these are complicated, difficult issues, "they are troubling debates society needs to be able to conduct with honesty".

Hypocrisy, he says, is rife. "Those who are willing to accept an organ transplant should be willing to donate as well, but that's not always the case. And it's all very well having strict reproductive laws in New Zealand when we know it's possible to get on a plane to Sydney and access more liberal policies regarding the use and manipulation of embryos."

The issues, as with many of Jones's interests, are a matter of life and death.