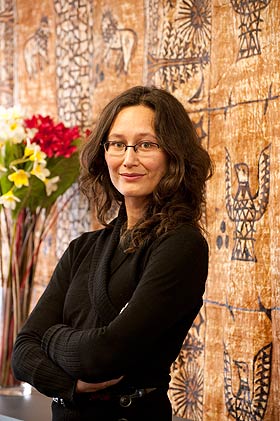 Everyone knows the way mothers speak to their babies is special, but to Dr Mele Taumoepeau the unique linguistic bond between mother and child is more than just baby talk. Taumoepeau has spent the last six years investigating the remarkable way mother-to-baby talk helps to progress a baby's cognitive development. Her research reveals how this seemingly mundane communication actually helps babies learn about the mental state and emotion of others, by helping them learn first about themselves and then about other people. In this way, they build the foundation on which they learn to socialise and understand a world full of people. Of course, maternal input has long been recognised as crucial to a baby's development.

More specifically, maternal involvement early in childhood has been implicated in children's later development of the ability to recognise people's mental states – their perception of others' emotions, desires, thoughts and knowledge – and an underlying, implicit understanding of people's motivations.

But exactly how the simple conversations a mother shares with her baby do this was, until recently, unclear.

With a background in speech and language therapy and interest in early language development, Taumoepeau, a research fellow in the Department of Psychology, set out to investigate just that. In 2003 she took up a PhD in what was to become a long-term research project.

Her research analysed the dialogue of more than 70 mother-infant pairs when the infants were at the age of 15, 24 and 33 months, and also tested the infants' social understanding as indexed by their knowledge of others' emotional states and mental-state language. It demonstrated an evolution in the mother-talk that had, until now, been unnoticed. When their babies were 15 months mothers talked with them mainly about desire states: for example, "You want the rattle?" or "Would you like the toy?".

But, by the time their children had reached 24 months, the mothers' use of desire language had decreased. Instead, their talk was characterised more by thinking and knowing terms: for example, "I think she's angry" or "Do you know what that is?".

Subsequently, by the time the children were 33 months old, mothers were using more complex thinking and knowing terms, while maintaining the same level of desire language as nine months earlier.

Taumoepeau also found a correlation between this evolving conversation and the infants' social development. Specifically, mother talk about the child's desires at 15 months of age proved to be a predictor of both children's emotional and mental-state knowledge at 24 months, whereas mother talk about others' thoughts and knowledge at 24 months proved to be a consistent predictor of social understanding at 33 months.

Taumoepeau theorises that this demonstrates how mothers "scaffold" children's social understanding, by speaking to the child at a level slightly above the child's current sphere of understanding, but not so far above as to make it incomprehensible, gradually helping to extend the child's knowledge. In other words, if a child understands her/his own mental state first, she/ he will more successfully learn about and recognise the mental states of others later on.

"We propose that initially, before language has really become established, understanding the self – through mother talk about the child's desires – is an important first step in understanding others' minds," says Taumoepeau. "Then later, talk about others becomes important."

Taumoepeau is now extending her research to include a focus on Pacific families which, she says, are typically larger and have a more collectivist approach to child-rearing. She is curious to explore whether, in different cultures, there are different linguistic-developmental pathways that, nevertheless, lead to the same developmental milestones.

"Having the ability to understand someone's mental state is a crucial asset for socialisation," explains Taumoepeau. "If we had to stop to think about what drives a person's behaviour every time they did anything, it would quickly become really laborious. This kind of social knowledge provides us with a shorthand that underpins our everyday social processes and gives us the ability to empathise with others."