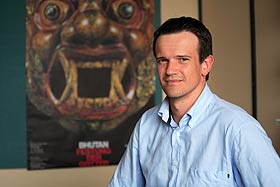 Dr Will Sweetman
He has found a crucial Hindu text that had been lost for three centuries.

Indiana Jones and The Da Vinci Code may be fictional, but academics really do have their moments in solving age-old mysteries in exotic locations.

Dr Will Sweetman, of the Department of Theology and Religion, has finally tracked down a crucial text that had been lost for three centuries.

The manuscript – the Tirikalaccakkaram – is the key to vindicating the work of Bartholomäus Ziegenbalg, the first Protestant missionary to India, and the author of an unusual book about south Indian Hinduism.

The book is remarkable, firstly, for arguing that, despite all appearances, Hindus ultimately believe in only one supreme being and, secondly, for citing a wealth of Hindu texts. Most authors of the time relied on personal observations and dubious interpreters.

Sweetman had a hunch that Ziegenbalg's 1713 work was based mainly on a Tamil text that had never been published, or even referred to, in either Indian or European scholarly literature for 300 years. He set Indian scholar R Ilakkuvan on the hunt for the missing manuscript. After 10 months scouring government, temple and private archives of palm-leaf manuscripts, Ilakkuvan triumphed. Studying the rediscovered treasure is complicated: like most pre-modern Indian manuscripts, it is written on palm leaves, the Tamil words run together without breaks and most vowels are not marked.

But Sweetman has already been able to confirm that Ziegenbalg's view of Hinduism as essentially monotheistic is not the projection of his preconceived ideas, but really is based on his close study of Hindu religious literature. 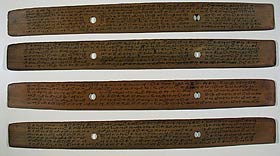 "Finding this text transforms our view of Ziegenbalg," says Sweetman. "There was nobody at the time who was engaged in such scholarly work."

Sweetman is also studying the reception of Ziegenbalg's work in Europe. His text was not published in Ziegenbalg's lifetime, but in the 150 years following his death four bowdlerised versions of it appeared, each of which gave it a different spin.

In 2009 Sweetman was awarded a fellowship from the University of Cambridge to spend a year writing a history of European attitudes toward Hinduism. The book will use Ziegenbalg's text, including its Tamil sources and its different published versions as a way of tracing changes in European attitudes during the transition to British colonial rule in India.