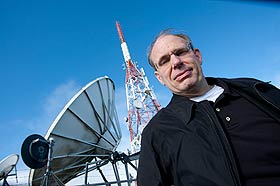 Dr Hugh Slotten
"I realised there had been no major study of satellite communications taking advantage of recently declassified archive material."

Fifty years ago the idea of instant communication with anyone, anywhere on the planet, was just a dream.

Turning it into reality was a technological and political nightmare. Dr Hugh Slotten (Department of Media, Film and Communication) is discovering the details of this for a book on the struggle to establish a single global satellite communications system. Research is slow. Information is drip-fed as it becomes declassified and questions under the Freedom of Information Act can take years to be answered.

Slotten hopes to complete his book after a forthcoming one-year fellowship as a recipient of the Charles Lindbergh Chair at the Smithsonian, with Washington an important source for documentation for the worldwide project.

In the early 1960's the US set up Comsat to establish the International Telecommunications Satellite Organization (Intelsat), aimed at benefiting the whole world's communications.

The effort involved technological development, space exploration, cold war politics and commercial resistance. By the end of the decade more than 60 countries had joined, with 28 members operating 50 ground stations to provide worldwide satellite coverage. Slotten's project grew from working on his recently-published book, Radio's Hidden Voice, a history of radio broadcasting and the origins of the Public Broadcasting System in the US. "I realised there had been no major study of satellite communications taking advantage of recently declassified archive material," says Slotten.

"At the height of the cold war the US was trying to convince other countries around the world to participate in global communications."

European countries resisted as they already had effective colonial communications with a network of undersea cables. However, less-developed countries saw the benefits of a new independent system.

"The people involved in creating a global system recognised they could not compartmentalise subjects such as international treaties covering frequency allocation, the development of system standards, foreign aid to developing countries, national security concerns, domestic economic policy and military planning.

"America effectively started a process of decolonisation," says Slotten. "It may not have been the intent, but was a by-product of the drive for a one-world system."

The ideal did not last.

"Intelsat was privatised in 2001 and now we have much more complicated and competitive regional systems."

But the dream had been realised and now we think nothing of being able to communicate worldwide with a device most of us carry in our pockets.