The marae and its place 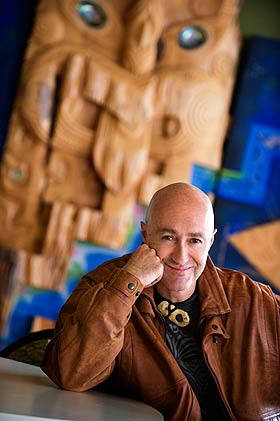 Professor Paul Tapsell
"What are marae offering to, and providing for, youth; what is drawing youth towards them and what is turning them away?"

Mention childhood to a Māori of Professor Paul Tapsell's generation – or his father's – and they will regale you with stories of long days spent at the marae; of gathering kaimoana around tidal rock pools with cousins; being drawn back by the moist, smoky smell of the hangi being lifted; staying up late and listening sleepily to the adults' kōrero.

The marae, recalls Tapsell, the newly-appointed Dean of Te Tumu, Otago's School of Māori and Indigenous Studies, was the glue that held the community together. It was where one's sense of history and belonging and whänau accountability was ingrained.

"Through ritual we were constantly reconnected to our rich ancestral past, to the landscapes on which our elders died so we might flourish. Our marae identity did not stop there.

"The elders would genealogically guide us deep into our Pacific origins: to ancient courtyards like Taputapuatea on Ra'iatea from where my tribe in particular originated. Māori are a Pacific people, who still think and act Pacific, but in a uniquely Māori way due to 3,000 plus years of successful oceanic exploration and settlement."

Tribal marae life in recent times, however, has markedly declined, says Tapsell. When this is considered next to the stubbornly intractable negative statistics relating to Māori erosion of identity and lack of well-being – including mental and physical health, housing, employment and education – important questions need to be raised.

"How important are marae to the future well-being of New Zealand?" asks Tapsell.

To pursue this question, Tapsell is part of an inter-university research team that has received funding from the Foundation for Research, Science and Technology to try to understand how participation in tribal marae by Māori youth contributes to pro-social behaviour and a positive sense of well-being. "Anecdotally, there is evidence that Māori who grow up dissociated from their heritage and language are more likely to end up on the negative side of social statistics. But we've never been able to put strong, empirical facts around the value of Māori infrastructure such as the marae."

The study, now being piloted across four Northland tribal areas, began with a survey of school children about two key identity drivers: their connection with marae and their familiarity with te reo. Long-term, this may provide information about the resilience of, and risks faced by, these tribal communities.

The marae represents modern-day New Zealand's unique social and cultural point of difference. Can we afford to lose it?

Other aspects of the project include engaging with urban-based descendant families to better understand their relationships with home marae and the use of web-based tools to link urban Māori with their ancestral heritage.

Further, the research team has been exploring the role of marae by working with kaumatua themselves to uncover what kind of leadership they are providing to youth.

"How are they enabling young people to understand their identity and responsibilities, and how are they positively contributing to society? What are marae offering to, and providing for, youth; what is drawing youth towards them and what is turning them away?"

Historically, explains Tapsell, the authority of the marae derived from the land and waterway resources it could command. "As years passed, these resources surrounding the marae – mana o te whenua – were washed away by tides of colonisation, in some instances leaving behind no more than the marae itself, surrounded by a sea of Päkehä farms, towns and developments."

Since World War II, he adds, 80 per cent of Māori have relocated to perceived urban areas of opportunity. Generations have been born, lived and died away from their tribal homelands. "They have become strangers to their own marae communities at the very time their elders are dwindling in numbers, while desperately seeking to reconnect and hold on to their very last resource, their mokopuna [grandchildren].

"Throughout the North Island, you can drive past many marae desperately in need of attention. There's little money to repair them and no readily available young labour force of mokopuna. Local schools, stores, factories and hotels have been closed and, in some cases, whole communities forced to leave behind their marae and relocate to less depressed urban centres.

"Of the 800-plus marae in New Zealand today, many no longer convey anything that is strong and healthful."

Tapsell believes the most recent raft of Treaty settlement-associated policies are further undermining the once omnipresent political, economic and social power of the marae, effectively placing at risk one of New Zealand's key national identity markers.

"The irony is that when we promote New Zealand, we will often draw upon symbols like beautifully carved wharenui. But, in reality, such examples are becoming more the exception than the rule. And, all the while, many of our young 'at-risk' descendants grow up in dislocated urban centres, disconnected from the rich values of belonging and service as once maintained by our elders.

"The marae is the anchor stone of tribal identity, tying every Māori to their wider communities of origin, genealogically connecting the past to the future and journeying us back into a deep Pacific history of common ancestral origins over 3,000 years old. The marae represents modernday New Zealand's unique social and cultural point of difference. Can we afford to lose it?"