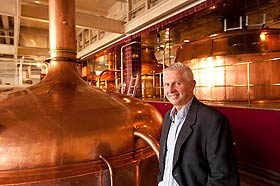 Professor Steve Jackson
He believes the big beer corporations have cleverly exploited the contemporary crisis of masculinity through targeted advertising and branding.

Sport, beer advertising and alcohol could be said to form a "trinity" that is having an increasingly powerful influence on society.

Steve Jackson, who specialises in the socio-cultural analysis of sport.

"I teach a course in Sport, Media and Culture that examines the power of promotional culture in shaping our everyday lives," says Jackson. "And one aspect of the course is to examine the contemporary codes of masculinity that are represented through advertising."

He argues that if you want to understand gender relations and the wider issues of alcohol and health, beer advertising offers one of the "key sites" of analysis.

Jackson says New Zealand has a cultural problem with alcohol, partly linked to advertising and media, a fact recently confirmed by the Law Commission's Alcohol in Our Lives report. "Drinking alcohol in conjunction with sporting events has been around from the times of the ancient Romans. Today, sport serves as one of the final frontiers where men can demonstrate their masculinity through physical prowess and dominance. So, the consumption of sport and beer offers an increasingly rare refuge where men can escape the pressures of work, family and social conformity.

"Sport is also a powerful cultural site where young boys learn to be 'real men', and drinking is part of that."

Jackson, along with Physical Education PhD student Sarah Gee, notes that the big beer corporations have cleverly exploited the contemporary crisis of masculinity through targeted advertising and branding.

In New Zealand, examples are the Speight's "Southern Man", Tui's "Yeah Right" and the "That Man Deserves a DB" campaigns, all of which signal an unapologetic reaction to political correctness. Speight's used this strategy to turn a failing brand into New Zealand's biggest-selling beer.

Drawing upon a nostalgic view of man's relationship with nature and physical labour, the company portrayed Speight's as not just a reward, but a badge of belonging. In Dunedin, the links between rugby, being a "scarfie" (University of Otago student) and Speight's were once so strong they were almost synonymous.

Jackson says sport is a major driver of the beer marketplace. In the United States, for example, of about $1 billion spent on alcohol advertising annually, 60 per cent goes to sports programming and, in New Zealand, the breweries' investment is significant. He is keen to see how the global beer industry, including its allied advertising and promotional agents, is trying to reach and expand its markets, particularly through its strong links with sport.

Drinking alcohol in conjunction with sporting events has been around from the times of the ancient Romans.

One of the major aims of the study is to map the global beer industry which, Jackson says, is consolidating at an ever-increasing rate, with five major global corporations dominating the market. Simultaneously, the big corporations are becoming increasingly aligned with global advertising firms and public relations companies, which is allowing similar branding strategies to be used in different countries.

As well, these developments in the international beer market are occurring at a time when deregulation is making alcohol more available than at any other time in history. To launch the wider study, Jackson recently published a book with Professor Lawrence Wenner, of Loyola Marymount University (USA), titled Sport, Beer and Gender: Promotional Culture and Contemporary Social Life.

Future studies will examine questions such as how beer or alcohol corporations are developing brands to target increasingly specialised niche markets (for example, youth, different ethnic/racial groups, social classes); how this "trinity" is linked with national identity - in a comparative study of New Zealand and Canada; and the regulation of alcohol advertising.