Tricks of the trade. Early Career Awards for Distinction in Research. 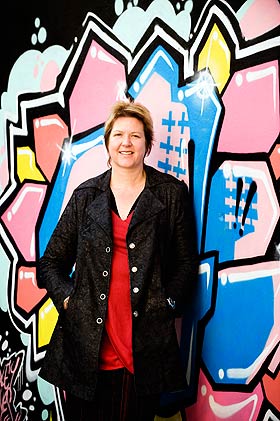 Dr Sarah Young
"We're taking virus-like particles and chemically tagging on proteins from tumours, and then using those to trick the immune system into thinking it is being attacked by a virus."

Otago researchers are at the forefront of international collaborations to use vaccines to tackle specific cancers.

Dr Sarah Young, senior research fellow in the Department of Microbiology and Immunology, hopes to see clinical trials within the next few years. Young investigated TB vaccines for her PhD at Otago before getting postdoctorate experience in major UK laboratories at the Imperial Cancer Research Fund and Cancer Research, where she looked at using vaccines against tumours. Since returning to the University of Otago in 2003, she has gained more than $5 million in research grants, with more than $2 million as principal researcher. She is collaborating internationally with Cancer Research UK, Oxford University, Queensland University of Technology and the Mayo Clinic in the US.

The TB vaccine BCG is used in therapy for bladder cancer, creating a non-specific inflammation to induce the body to attack the cancer. Young hopes to enhance this reaction and make it specific to certain tumour proteins, using manipulated virus-like particles to target various cancers. The idea is to take cancer cells from the patient, disguise them as a virus, then reintroduce them.

"Virus-like particles are very good to use in cancer patients because they're not like a normal virus in that they can't replicate to cause an infection – they're basically an inert protein – but they look dangerous to the immune system," says Young.

"We're taking virus-like particles and chemically tagging on proteins from tumours, and then using those to trick the immune system into thinking it is being attacked by a virus. "The body sees those tumour proteins as being more dangerous than they are and it will make a strong immune response to them, which could have the downstream effect of killing off the tumour. "We've shown in vivo that it prevents tumour growth in animal models. We've looked at the mechanisms of how that happens and we have seen the same response in human cells.

"Now we're going through the regulatory processes to begin clinical trials, which could be within the next three or four years." Young's trials may start in the UK, where there are specialist laboratories not yet available in New Zealand, although there is no shortage of local interest and support.

"We have good systems set up and clinicians really keen to get involved in these sorts of studies," says Young.

"Even though we are geographically isolated in Dunedin, we have a very strong research base here and a good population of people who are really interested in science.

"They see the University as quite a special place and we don't have problems with finding people who want to become a part of a study." Young has been awarded a 2009 University of Otago Early Career Award for Distinction in Research, following last year's Sir Charles Hercus Fellowship from the Health Research Council.

She is a member of the Foundation for Research, Science and Technology Postdoctoral Fellowship Assessing Committee and the Lotteries Health Assessing Committee, and has just stepped down as President of the Otago Institute (Otago branch of the Royal Society).