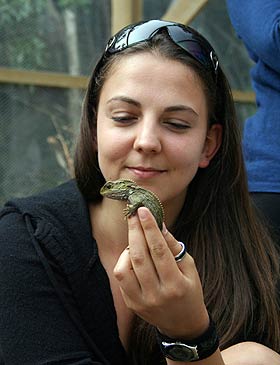 PhD student Anne Besson
Her research has focused on how tuataras would cope in the southern environment.

It may not be as internationally recognisable as the kiwi, but the tuatara is well known in the scientific world as the last survivor of a prehistoric group of reptiles called rhynchocephalians.

Now University of Otago research is helping to preserve this distinctive creature – which, before the arrival of rats with human migration, ranged from Northland to Bluff – and return it to its wild habitat in the southern South Island.

In April 2009, as part of a national recovery plan to reintroduce them where possible to their original range, 15 juvenile tuatara were transferred to Orokonui Ecosanctuary, near Dunedin. This followed three years' research by Department of Zoology PhD student Anne Besson aimed at understanding the biology of the animals and how they would perform in their new environment.

Besson's PhD supervisor and project leader, Associate Professor Alison Cree, says returning the animals presented a challenge because the nearest source of tuatara was on islands in Cook Strait, several hundred kilometres north and in a warmer climate. And, although tuatara had once lived in the deep south, there was no certainty, after thousands of years of separate evolution, that they were physiologically the same as tuatara elsewhere today.

So would the tuatara survive in its southern habitat? Besson attempted to answer this by monitoring basking opportunities to see if reduced sunlight hours would adversely impact on the animals' activity and survival.

She found they adjusted to having about two hours less sunshine a day on average than in Cook Strait and were still able to thermo-regulate, or control their body temperatures efficiently. Another issue in bringing tuatara back to the region was how eggs laid in the cooler soil temperatures would perform. Cree explains that tuatara have the unusual trait of temperaturedependent sex determination, which means that their sex remains undecided until the incubating embryos experience summer temperatures.

However, further monitoring at Orokonui during the last southern summer showed warmer soil temperatures than previously recorded at several sites – warm enough to produce males. Cree is encouraged by this result. "So we now think there is a possibility to produce males as well as females, at least in some years." 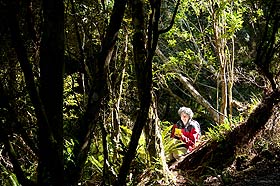 Associate Professor Alison Cree
This project is a “lovely example” of how research can help guide a conservation question and outcome.

The juveniles are now being raised away from public view in an enclosure within Orokonui Ecosanctuary's predator-proof fence. At the time of writing, they appeared to have survived their first winter and, with the warmer spring temperatures, were becoming easier to monitor. Cree says that, pending wider consultation with the Department of Conservation and iwi, it is hoped eventually to release the tuatara to roam freely at Orokonui.

So what's the significance of bringing the tuatara back to the region?

Cree describes it as is a "wonderful opportunity" for local people and visitors to see tuatara, learn about the ecological history of the region and feel they're part of the tuatara's future. She adds that reintroduction to the south may become increasingly important with the wild habitat of tuatara on small islands further north being vulnerable to the effects of climate change, including rising sea levels, increased temperatures and extreme weather, all of which could affect the survival of eggs and juveniles, and sex ratios between males and females.

She sees the project as being a "lovely example" of how research can help guide a conservation question and outcome, adding that it's "really exciting" to be part of a community-based project.