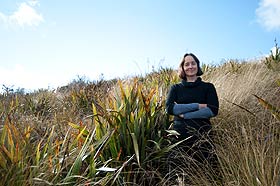 Dr Janet Stephenson
“In my view, both renewable energy and landscapes are incredibly important to us as New Zealanders. I’m interested in whether these tensions can be reconciled ...”

There's a lot of energy being expended on the subject of wind farms. Should we love their renewable energy or hate their skyline silhouettes?

Dr Janet Stephenson (Department of Geography and Centre for the Study of Agriculture, Food and Environment) is involved with a number of ground-breaking projects investigating people’s feelings about these “farms”. One project, by research student Jess Graham, supervised by Stephenson, Dr Inga Smith and Professor Gerry Carrington (Department of Physics), looks at the perceptions of people who made submissions to three wind-farm proposals.

For the second, Stephenson teamed with Professor Rob Lawson (Department of Marketing) and research assistant Matthew Hoffman to examine how non-submitters felt.

The Graham project seems to be a first for New Zealand and has been published in a special edition of Energy Policy.

Different proposals draw different levels of opposition, but landscape issues are almost always to the fore, says Stephenson. “There’s a tendency to assume that visibility is the key issue, but the most widely visible wind farm was the least opposed. Concern about landscape impacts goes much deeper than just visibility.

“In my view, both renewable energy and landscapes are incredibly important to us as New Zealanders. I’m interested in whether these tensions can be reconciled by better understanding and different approaches to assessing landscape qualities.”

Other predictable concerns for submitters include the local effects of construction and environmental impacts. Unexpectedly, perceptions of the wind-farm developer as a good corporate citizen, or not, were also strongly tied to submitters’ overall attitudes.

“It’s not just the direct effects of wind farms,” says Stephenson. “There are many more influences on people’s opinions that we need to come to grips with.”

The non-submitter report also covers new territory. “No research has been published on non-submitters’ opinions in New Zealand – and almost none internationally.”

Hoffman’s report revealed that, contrary to popular belief, non-submitters to wind farm proposals are not a silent supportive majority, but are largely ambivalent or have less extreme views than submitters.

This partly explains their lack of motivation to submit, but other influences include personal circumstances and a feeling of powerlessness.

Other research students supervised by Stephenson have examined whether submitters’ opinions of wind farms change once they are operating, and community attitudes towards small-scale wind farms. Stephenson’s current project compares what landscape experts say with what submitters say about the same landscapes. If an “assessment gap” is revealed, her research may help explain why wind-farm battles can be so fraught and provide ways to help reduce the conflict.