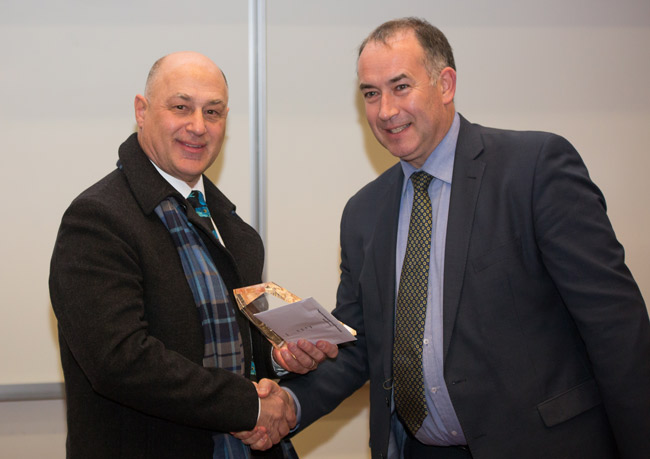 A University of Otago frog expert who has dedicated more than 30 years at the forefront of amphibian conservation, was last week recognised for his lifelong commitment to science at an awards ceremony to launch the 11th biennial New Zealand International Science Festival.

Professor Phil Bishop (of Zoology) took out the University of Otago Lifetime Achievement Award in the Otago Daily Times Science Awards – a joint initiative between the ODT and the New Zealand International Science Festival.

A childhood fascination with frogs inspired Professor Bishop to a career that has seen him lead international efforts to save the fledgling amphibian population as Co-Chair of the global International Union for the Conservation of Nature SSC Amphibian Specialist Group and Chief Scientist for the IUCN Amphibian Survival Alliance (ASA).

As Director of the Ecology Degree Programme at the University and a passionate teacher, he encourages students to perform independent research looking at the local population of frogs. 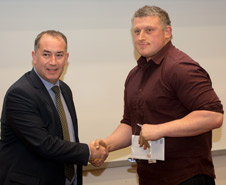 Another Otago award winner was Dr Damian Scarf – who won the Otago Museum – Science Communicator award in recognition of excellence in communication of the sciences to a “non-science crowd”.

Dr Scarf (of Psychology) says he isn’t overly comfortable talking in front of people – which makes this award for communication even more special.

He says there are two strands to his work – and each is important for different reasons.

“Talking about the curiosity driven work I do (e.g., testing the numerical ability of pigeons) really grabs peoples interest. I think it has the ability to give people that sense of wonder. The public seems to latch onto that work, we have been featured in the New York Times, the Discovery Channel, and over 100 other news/science outlets. It is also something that connects with kids, I gave a talk on the pigeon numerical work to the kids at Roslyn Kindergarten, PowerPoint and all.

“The other strand of work I do is more applied, such as investigating the importance of social connections for mental health in adolescents. Communicating that work is really important because it gives parents and people who work with adolescents (e.g., teachers, psychologists, residential assistants, etc.) information they can put into practise.”

"The winners of these Awards are people whose work ‘goes beyond’ – pushing boundaries and making an invaluable contribution to science in Otago."

Dr Scarf draws on his own personal experience in a TEDx Dunedin talk – which has been viewed over 12,000 times.

He believes connecting with the audience is key and, in order for that to happen, the audience must see you as human.

“You do not want to come across like a robot, speaking a language the audience does not understand, but you also don’t want to come across as fake. I am lucky in that, with my talks on social connections and mental health, I can weave in my own personal story and that makes it easy to connect with people.”

The third Otago winner was Kaitlyn Martin (of the Otago Centre for Science Communication), who received the ADInstruments Emerging Scientist, tertiary student award, for an emerging tertiary sector scientist.

The award recognised her enthusiastic contributions to science outreach programmes and science clubs for school aged children, which she combines with her own studies.

New Zealand International Science Festival Director Dan Hendra says acknowledging the region’s unsung science heroes captures the spirit of the Festival – a celebration of science from the everyday to the extraordinary.

“The winners of these awards are people whose work ‘goes beyond’ – pushing boundaries and making an invaluable contribution to science in Otago.”

The largest Festival to date – with more than 230 events at 24 locations around Dunedin – the NZ International Science Festival will run until Sunday 15 July. A full list of events can be found at www.scifest.org.nz.