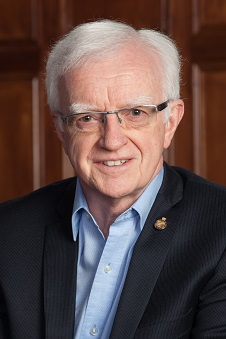 It should be special enough that Brian Coutts is retiring from working at the School of Surveying, after over 25 years’ service, at the end of December. But that’s not the half of it. Today he graduates with a PhD in Surveying – 48 years since starting here as a fledgling 1st year student – and as acting Senior Drum Major of the City of Dunedin, will lead the graduands' parade.

“I’ve been a pipe bandsman (drummer and Drum Major) since I was 12. It’s been an absolute passion for the majority of my life”, he says.

Brian, who will be joined in the procession by his son, also a drummer, may be retiring from work and study, but he intends to continue performing, and will be attending a festival in Crimea in March next year.

A Drum Major of the Green Island Pipe Band (Champions of Otago) for 15 years during which the band was twice Grade 2 NZ Champions, he was also 4-times runner-up (silver medal) in the NZ national Drum Majors Championship – in a field of 40-50. He has also performed as a pipe band drum major at the Royal Edinburgh Military Tattoo, the Virginia International Tattoo and the March of the Immortal Regiment in Moscow. Brian is currently President of the Otago Centre of the RNZ Pipe Bands Association.

After graduating from the School of Surveying, Brian worked in Westland and Canterbury as a cadastral surveyor, becoming a Registered Surveyor in 1975. Following secondment as Planning Officer to Mt Cook National Park, Brian returned to university to take a planning qualification, and became a Full Member of the NZ Planning Institute in 1984. He then worked as a central government land use planner in Westland and Otago in the Department of Lands and Survey dealing with land use issues in national parks, reserves, unalienated Crown land and farm development.

On its establishment in 1987 he joined the Department of Conservation as the principal planner for the Southern Region (Otago, Southland, Stewart Island and the sub-Antarctic Islands) and had personal responsibility for the planning of expanded facilities at Milford Sound. Brian left central government for private practice as a consultant surveyor and planner, before taking up an appointment with the School of Surveying in 1992.