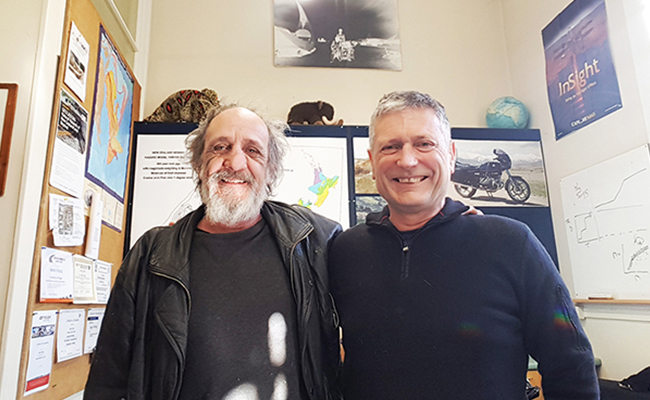 Ross Nicolls and Professor Mark Stirling have formed a friendship over their love of geology and music.

Good things take time, but in addition to completing his long-awaited Masters of Science in Geology Ross Nicolls has also gained a new and lasting life-long friendship.

Last Saturday Ross graduated in absentia with the postgraduate degree he started in 2002, which was then put on hold for fourteen years due to family circumstances.

It was in 2016, soon after Professor Mark Stirling started in the Department of Geology, that former staff member Dr Virginia Toy raised the possibility of resurrecting the degree as she could see the potential for professional and personal connection between Mark and Ross.

“We clicked straight away,” Ross says, and the pair became very keen to see the research on Otago’s geology through as a worthy scientific pursuit, but also as a fitting tribute to Professor Richard Norris who they had both had as a supervisor.

“Our collaboration and friendship became well-established in a very short time, owing to our love of Central Otago neotectonics,” Professor Stirling remarks.

After reinstating the masters, their collective challenge was to update and complete the research in such a way that it would show enough present-day relevance to pass the examinations.

Their combined efforts succeeded in meeting that challenge, but there was also another connection that glued it all together; a shared love of music.

As an accomplished musician, Ross has played in many bands such as Dunedin’s The Spaghettis, which Mark recalls seeing when he was a student.

“Our collaboration and friendship became well-established in a very short time, owing to our love of Central Otago neotectonics,”

“The big déjà vu for me was seeing a poster of The Spaghettis on Ross’s wall in 2017, and the guy I remember as looking like a hungover Rod Stewart all those years ago was Ross!”

Since then, music has become central to their growing relationship, and they both relish their regular jamming sessions.

They have even created a new unofficial band The Borderline Collies and play at the odd informal event including, just recently, Mark’s sixtieth birthday.

Ross’s research has contributed to one of the big goals of the Otago Earthquake Science Group that Professor Stirling Chairs, which is to understand the time-space pattern of active tectonics and seismic hazards in Otago.

“Ross used his observations of faulted and uplifted landforms to understand the geometry and long-term slip rates of the Hyde and Taieri Ridge faults in east Otago.

“These are faults that are close enough to Dunedin to produce significant shaking in the city in the event of major ground-rupturing earthquakes.”

Since starting at Otago in 2016, Professor Stirling says Ross is the student he is most proud of, as he negotiated significant obstacles to get to this point.

And Ross is quick to return those compliments; “Mark is such a lovely guy and is just brilliant. We work really well together, so are going to continue doing so.”

“I have lots of info that needs to be made available in the public domain and for the benefit of other students, so I’m starting to write some papers for publishing,” Ross adds.

To celebrate his graduation Ross and Mark had a quiet jam session practising for a party they are playing at this weekend.

“It was nothing too serious,” Ross says. “Just geology, friends and music. Perfect.”