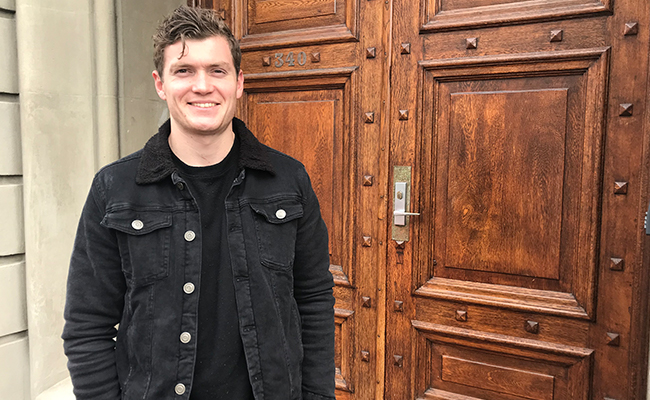 As a child Dr Samuel Macaulay was always on the lookout for creepy-crawlies, now he’s making a career out of it.

Dr Macaulay graduated from Otago in absentia on 15 August with a PhD in Ecology.

The Otago Boys’ High School alumni enrolled at the University in 2012 and his interest in ecology grew as he progressed through his studies.

“I’ve always had a love for the outdoors. My family would tramp and from a young age I was getting in streams looking for bugs,” he says.

“In many ways it’s no surprise I’m making a vocation out of this and trying to protect some of those bugs I encountered growing up.”

As an Honours student, Dr Macaulay had the opportunity to be mentored by Fulbright scholar Dr David Buchwalter, who was an ecotoxicologist from North Carolina visiting Dr Christoph Matthaei’s freshwater ecology research lab at the Department of Zoology.

His research investigated the effects of water temperature on the toxicity of the widely-used neonicotinoid pesticide imidacloprid on non-target New Zealand aquatic insects.

Dr Macaulay’s doctoral research is an extension of that work. It investigated how this group of insecticides affect streams in the context of climate change.

“I think all Applied Science has to consider the additional effects of climate change in their research to some degree, given this will have implications for all ecosystems.”

“In many ways it’s no surprise I’m making a vocation out of this and trying to protect some of those bugs I encountered growing up.”

Streams that were fast-flowing, implying no water abstraction which can reduce flows, were most negatively affected because they contained many sensitive species.

During his research period, a “serendipitous” heatwave captured the extent to which short-term, extreme temperature increases can alter stream communities.

“Overall, the implications are that climate change on its own could radically affect streams and river communities. But at the same time, we cannot ignore the additional or underlying effects of contaminants including those for which no current monitoring exists, such as pesticides.”

While his childhood love of creepy-crawlies led him down his study path, the larger impacts of pesticide use and global climate change inspired him to continue on his journey.

Feeding a growing global population in the context of climate change will bring challenges for both food producers and environmental managers aiming to mitigate the impacts of intensive agriculture.

In order to improve crop production, pest insects are typically controlled through insecticide use. However, as Dr Macaulay’s research suggests, contamination of freshwaters with insecticides combined with impacts of climate change poses a considerable threat to these vulnerable ecosystems.

“It’s important to manage the use of pesticides sustainably, ensuring that they are not overused to the detriment of our environment.”

Now that his time at Otago is over, Dr Macaulay is looking to continue his career as a freshwater ecologist and he has some ideas on how to put his research to good use.

There’s currently no regular monitoring program for pesticides in New Zealand’s surface waters and he hopes his work can contribute to regulations for sustainably managing the use of pesticides both in Otago and nationwide.