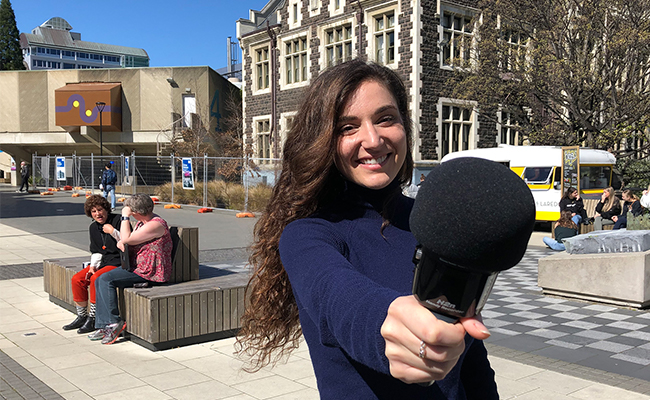 Alba Suarez Garcia is a doctorate student at the Centre for Science Communication.

While studying orangutans in Spain Alba Suarez Garcia realised that for her it's the stories behind the science that hold the most meaning and wonder.

For three months, the Centre for Science Communication doctorate student observed the behavioural cognition of seven orangutans in captivity at Barcelona Zoo for her previous research on how forms of enrichment foster positive interactions and natural foraging behaviours.

However, it was observing the finer details of those interactions between individuals that made a huge impact and resulted in Alba changing her research path.

“I witnessed incredible social interactions between the individuals that were both enriching and enlightening, and even though I could see clear intentions in many of those developments, it was difficult to report these observations scientifically,” Alba says.

“That’s when I realised I wanted to find a path connecting the science with the stories that are important to me, which lead me to science communication.”

Now two years into her Doctorate, Miss Suarez Garcia is telling the stories of science through the scientists themselves and exploring whether different forms of narrative can illicit interest in science-based stories.

As part of her PhD, she has produced a series of podcasts on postgraduate scientists who are part of Abbey College’s residential international community.

The podcast, titled ‘Around the World in 80 Discoveries’, is a public engagement initiative aiming to profile the diversity of science and researchers from a wide range of cultures who are studying at Otago.

Alba says she was surprised to notice the commonalities among the diversity of scientists despite their journeys and research being so distinct from one another.

With many platforms now available to communicate science, podcasts were chosen to foster an “immersive experience and empower the imagination when conversing with the scientists in their research environments.”

“Podcasts are also an easily accessible medium for families and friends of scientists who often don’t discuss science in any depth around the dinner table,” Alba adds.

The other bonus about the medium is her parents in Spain can also listen to them which keeps them connected with Alba’s research in New Zealand.

Due to her fascination with Lord of the Rings, Alba says New Zealand was always going to be on her ‘must visit’ at some stage of life, and that the raw natural beauty of Dunedin and its surroundings are even reminiscent of her home region of Asturias in Spain.

“But to be here right now and witness such fantastic leadership from the Prime Minister during the pandemic is amazing. To see the empathy and compassion she has displayed in handling all the big events that have happened in New Zealand since I have been here is something I haven’t seen in a political environment before. That’s been another stand out New Zealand experience.”

Link to podcast: ‘Around the World in 80 Discoveries’ podcast is available on the Otago Access Radio as follows: