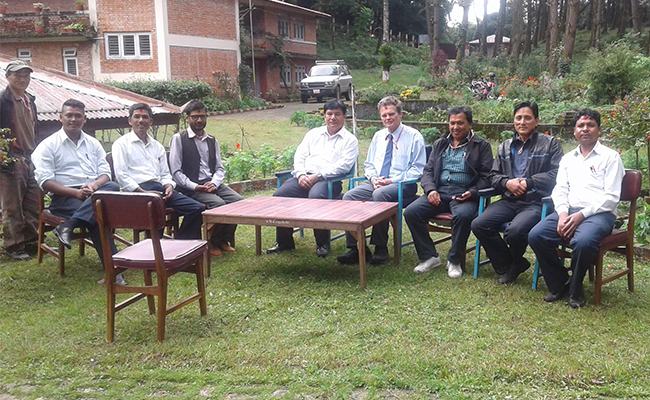 Dr Chris Pearson, Honorary Senior Fellow of the University of Otago’s School of Surveying, with surveyors from Nepal’s Department of Survey.

A School of Surveying Te Kura Kairūri academic has been instrumental in supporting Nepalese surveyors to measure Mount Everest for the first time.

Geodesist Dr Chris Pearson has taken a lead role in New Zealand’s MFAT Head of Mission Fund project by providing Nepal’s Department of Survey with training and expertise to undertake the work themselves.

The New Zealand Ambassador-designate to Nepal, Mr David Pine, says supporting this partnership between the Government of Nepal and the University of Otago honours the legacy of Sir Ed Hillary and Tenzing Norgay Sherpa as well as contemporary New Zealand-Nepal relations.

Dr Pearson, an Honorary Senior Fellow of School of Surveying, says his involvement supporting Nepalese surveyors reach the goal of measuring Mount Everest and also contributing to the development of the country, has been immensely gratifying.

Mount Everest’s new height of 8,848.86m was announced in a joint statement by Nepal and China, marking a small increase from the commonly referenced height of 8,848m established by the Survey of India in 1954, the year after the late Sir Ed Hillary summited the world’s highest peak.

“Owing to tectonic activity such as the significant 2015 Gorkha Earthquake, the height of Everest is constantly changing and using the latest technologies allowed the new accurate measurements to be made.”

Since the 2015 earthquakes which caused massive ground displacement across the land-locked country and resulted in significant inaccuracies in coordinates and geodetic databases, Dr Pearson has led New Zealand’s involvement in surveying mapping projects in Nepal.

“Sir Edmund maintained strong links to Nepal for the rest of his life and went on to serve as New Zealand’s Ambassador to Nepal. Our support for this project honours his and Tenzing Norgay Sherpa’s legacy, as well as underlining the warmth of contemporary New Zealand-Nepal relations."

“As New Zealand is so seismically active, we have developed specialist surveying knowledge and technological expertise such as developing semi-dynamic datum models that allow for the fact everything is constantly moving,” Dr Pearson says.

New Zealand’s role also involved Land Information New Zealand (LINZ), and New Zealand company Trimble who donated equipment including GPS receivers, other advanced surveying technology and software. One of these GPS receivers was installed at the summit of Everest to determine its final height.

“The School of Surveying has a long association with Trimble and together our surveying expertise and specialist technologies have really been harnessed for benefit of the Everest Project,” Dr Pearson says.

This year Trimble generously donated five robotic total stations and other equipment to the School of Surveying Te Kura Kairūri, providing students with the latest technologies before starting professional careers.

Graduates at the School have had internships at Trimble, and around 50 graduates have worked in their research and development area over the years, both in Christchurch and overseas.

Dr Pearson was invited to assist with the Mount Everest project following his involvement in a mapping project after the 2015 earthquakes, which included spending time in Nepal and providing technical assistance from New Zealand.

He explains that measuring peaks in the Himalayas comes with additional challenges, such as gravity, which need to be accounted for when conducting survey work.

“Nepal has an extreme geoid undulation that is unique on the planet, and is the result of something really heavy under India on one side of Nepal and the extraordinary light Tibetan Plateau on the other,” Dr Pearson says.

“We don’t know exactly why this is, but the levelling network and models have to be adjusted to take this big variation across the country into account.”

He adds the new measurement is by far the most accurate sea-level height for Mount Everest due to the technology used, and the new models will also make it easier to measure the exact heights of other mountains in Nepal using modern GPS techniques.

Mr Pine says it was a delight to financially support this partnership between the Government of Nepal and the University of Otago.

“Sir Edmund maintained strong links to Nepal for the rest of his life and went on to serve as New Zealand’s Ambassador to Nepal. Our support for this project honours his and Tenzing Norgay Sherpa’s legacy, as well as underlining the warmth of contemporary New Zealand-Nepal relations.”