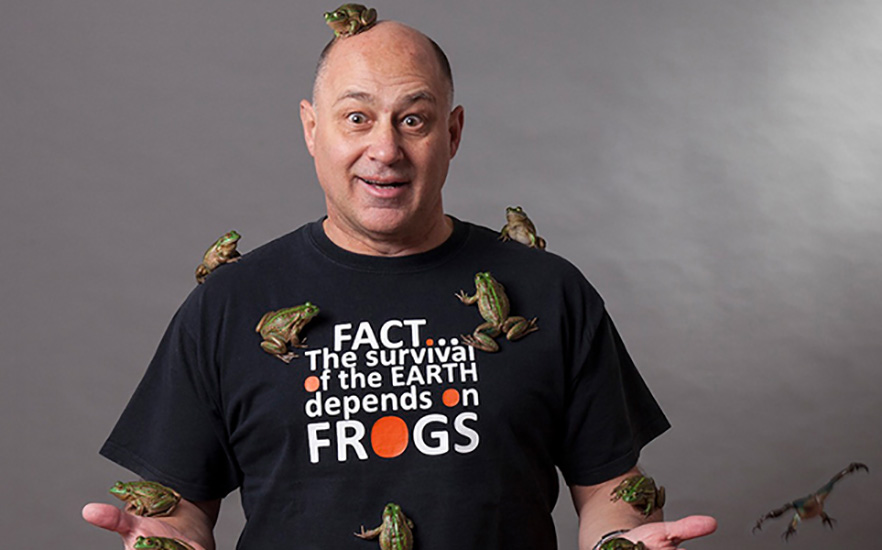 Professor Phil Bishop was “quite protective” of his frogs during the shoot, recalls the photographer of this portrait taken for his 2014 Inaugural Professorial Lecture.

Phil’s wife Debbie doesn’t appear in the photo, but she was right there helping to place the frogs and ready to catch any that decided to leap off. Bouts of laughter echoed through the studio that day. 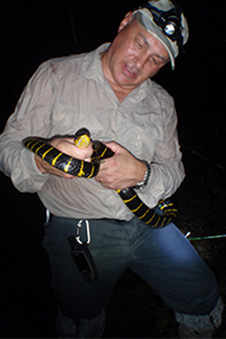 Professor Bishop was not just protective of his frogs however, he was passionate about them; his life was intricately connected to amphibian research and conservation efforts to support their well-being and survival.

That passion had burned bright since keeping frogs and toads as pets as a young boy growing up in England, the numbers ever increasing to an impressive 32 species when studying for his master's at Cardiff University.

The amphibian and wider science community remain at a loss to absorb the enormity of Professor Bishop’s recent passing following a short illness, at a time when he was preparing to take on his new role as Zoology’s Head of Department.

Professor Bishop has been at the forefront of amphibian conservation biology, both in New Zealand and internationally, since arriving at Otago in 1997 as a Senior Teaching Fellow in Zoology.

With over 100 publications in conservation biology and applied ecology to his name, his research has made a broad contribution, from Aotearoa’s little-known native frog species to the development of conservation techniques and approaches globally.

During his time at Otago, Professor Bishop supervised 46 research students, was a tireless advocate for frog conservation in the public media, gave countless public lectures and school presentations, and organised multiple public events to promote conservation.

He was both a great scientist and a great communicator, who was firmly grounded in the importance and essence of community.

In recognition of his sustained commitment to wildlife conservation, Professor Bishop received numerous accolades including a Lifetime Achievement Award from the New Zealand International Science Festival.

This holistic outlook encapsulates the approach he applied to his work which was also evident in his varied roles, including Acting Director of the Centre for Science Communication, as well as Director of the Ecology programme from 2015–2019.

During this period, he designed and ran the highly successful tropical field ecology paper that included an annual three-week field trip to the ancient and pristine Ulu Temburong rainforest in Borneo, held in conjunction with the University Brunei Darussalam.

“Phil was a passionate field biologist who loved not just frogs, but all sorts of weird and wonderful wild creatures,” Professor Matthaei says.

“I'll never forget the sight of him holding a highly venomous pit viper looking extremely happy and with a big smile, and the students looking on in awe. This is the way I will always remember him."

Professor Bishop was a strong advocate of giving undergraduate students research experience from an early stage, and one of the students on the first field trip, Tegan Murrell, remarked on the benefits she acquired from this learning-by-doing approach.

“One of the most valuable things this research-led approach has taught me is flexibility, as field work rarely proceeds in the way that textbooks would suggest,” Tegan reflected.

Current Doctorate candidate and international student, Joseph Altobelli, says he came to Otago to be guided by Professor Bishop as a global figure in amphibian conservation and passionate protector of New Zealand’s precious native frogs.

“Professor Phil Bishop was simply the best friend and colleague that any of us could hope to work alongside, and he gave so much to the university community,” Professor Closs says. “We all miss him terribly, but our lives are so much richer for having known him.”

While Professor Bishop still clearly had so much more to give, including in his recent appointment as Secretary General-Elect for the World Congress of Herpetology, the community can be fuelled by what he achieved, the collaborations he made, and global movements he facilitated.

In early 2020, in his role as Director of the World Congress of Herpetology (WCH), Professor Bishop led an incredibly successful 9th WCH that brought 870 delegates to Otago from 57 countries worldwide.

In concluding the Congress, the Aotearoa Climate Change Declaration was announced, highlighting the necessity of scientists and society to become more harmonious with the ecological workings of the planet, including climate stability and conservation of biodiversity.

“We know that at least 40 per cent of amphibians are threatened by extinction, and reptiles are not far behind, making them the most threatened groups of vertebrates on the planet,” Professor Bishop said at the time.

“Our declaration following this conference reflects that urgency and we implore national governments to take immediate action to prevent further losses of important species due to the impacts of climate change.

“There is an absolutely critical need for more awareness and action for global conservation efforts, and as a Congress we have decided to take an important lead role in working towards that goal.”

At a talk given by Professor Bishop at the conference, he noted that while the future for amphibians is still precarious, global amphibian conservation is finally moving ahead in a coordinated and collaborative way.

Given the rapid rise of COVID-19 and New Zealand’s move into lockdown a few weeks later, the WCH at Otago would have been one of the last big global conferences to take place.

During lockdown Professor Bishop continued to connect with the wider community from home, presenting regular Zoom-a-Zoologist sessions for a local primary school in Anderson’s Bay, and tweeting a frog fact of the day on Twitter, something he had done every day since 2012.

During that time, he also wrote a blog for Wild Dunedin on how crucial it was to maintain a close connection with nature for benefits of both personal physical and mental well-being during lockdown.

“So, is getting outside and being exposed to the real nature better for you? The simple answer is ‘Yes’ and scientific research backs-up my insight,” Professor Bishop wrote.

His words describe walking with Debbie and their dog on the deserted Chisholm Links and watching an Australasian harrier being mobbed by two magpies and a pair of spur-winged plovers.

And towards the end of the blog, a paragraph spoke of reverence for his beloved frogs.

As Professor Bishop wrote; “However, being a frog-fanatic, I know instinctively that while I get great pleasure from watching films or looking at photos of really cool frogs, nothing will beat the enjoyment of capturing one in the hand and looking into its eyes, a truly intimate and amazing experience.” 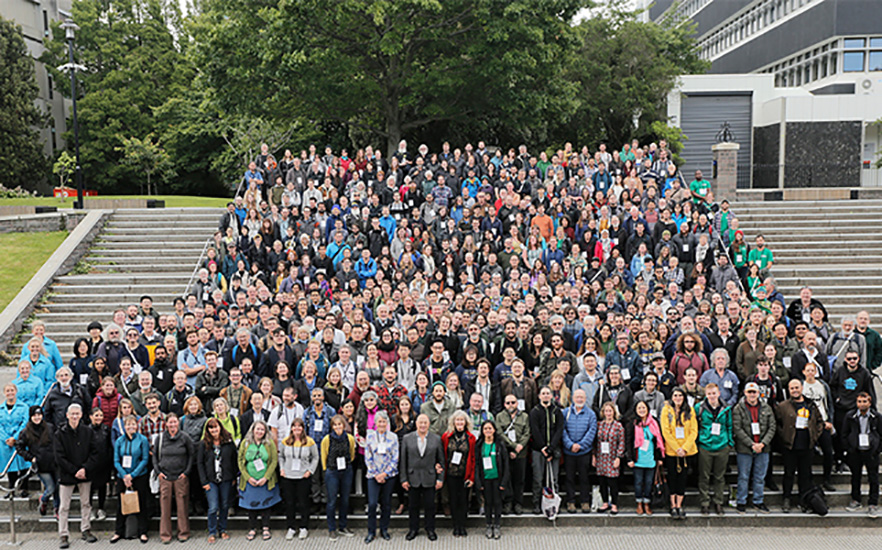 Professor Bishop and his wife Debbie, at centre front of the 9th World Congress of Herpetology held at Otago in January 2020.