Christina Hulbe’s fascination with the Ross Ice Shelf works at many scales and levels:
“It’s very flat and yet there are undulations that you can see clearly when you look at it in the right way, say by stacking together many satellite images or by lying down on surface and examining the snow. On the ground, the relief is so gradual that you have to look very closely to see the way the ice crystals have been arranged by the wind, how they grow over time and sparkle. It confounds your sense of scale.” 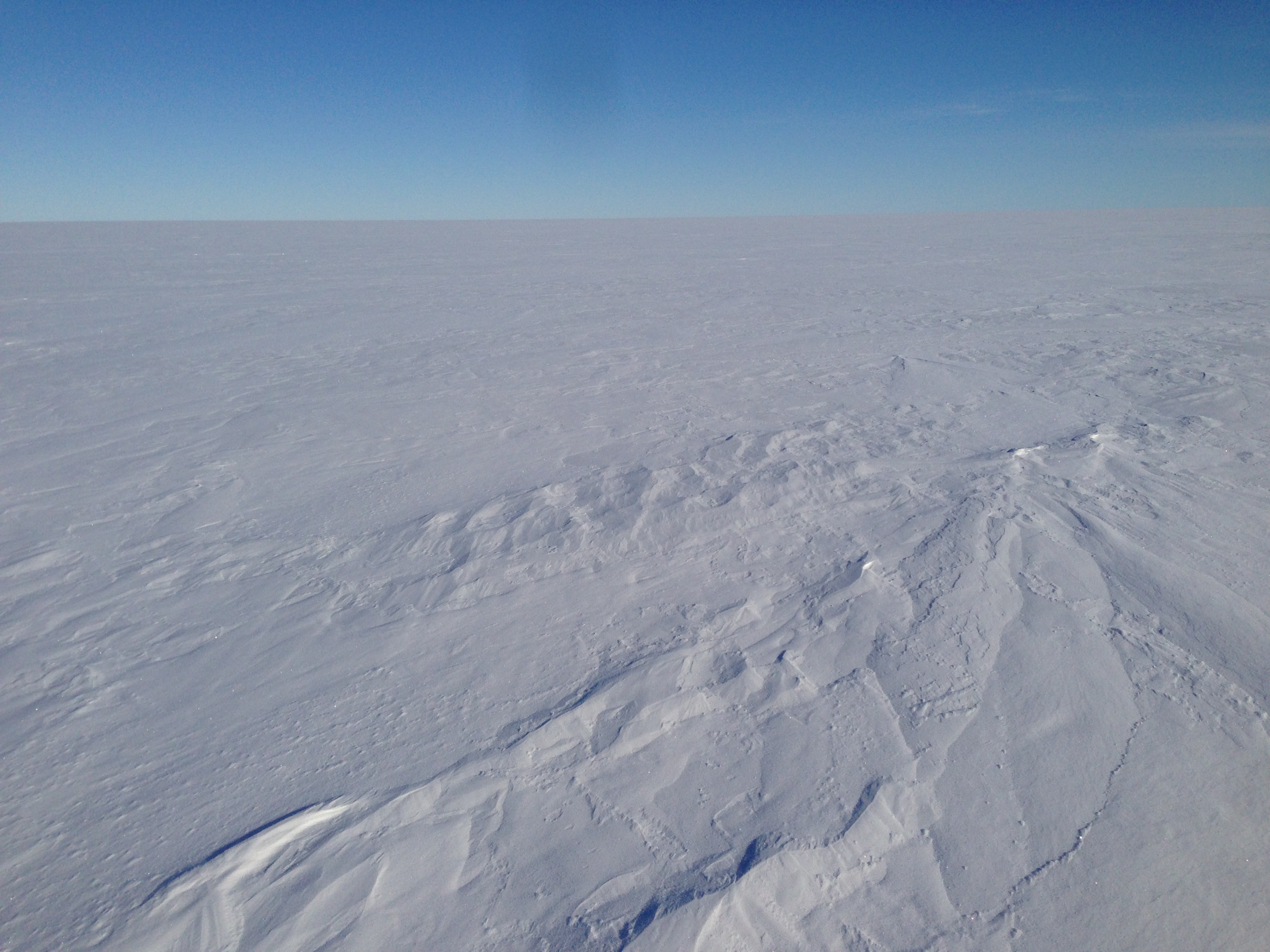 From this angle you can see the drifts and ridges formed by the wind over the snow.

December’s 350 km journey from Scott Base to the prospective research station on the ice shelf was exhilarating - blizzard conditions, trying to eat dinner before it froze to the dish, arriving with only half of the tyres on the lead vehicle as the inflatables burst one by one … Christina Hulbe, Christian Ohneiser, Greg Leonard, Laurine van Haastrecht, Raki Ryan and Andrew Gorman made up the Otago contingent in a cross-disciplinary team, with colleagues from Canterbury, film-makers from National Geographic, a field safety officer and a field mechanic (who was very resourceful when all those tyres burst). 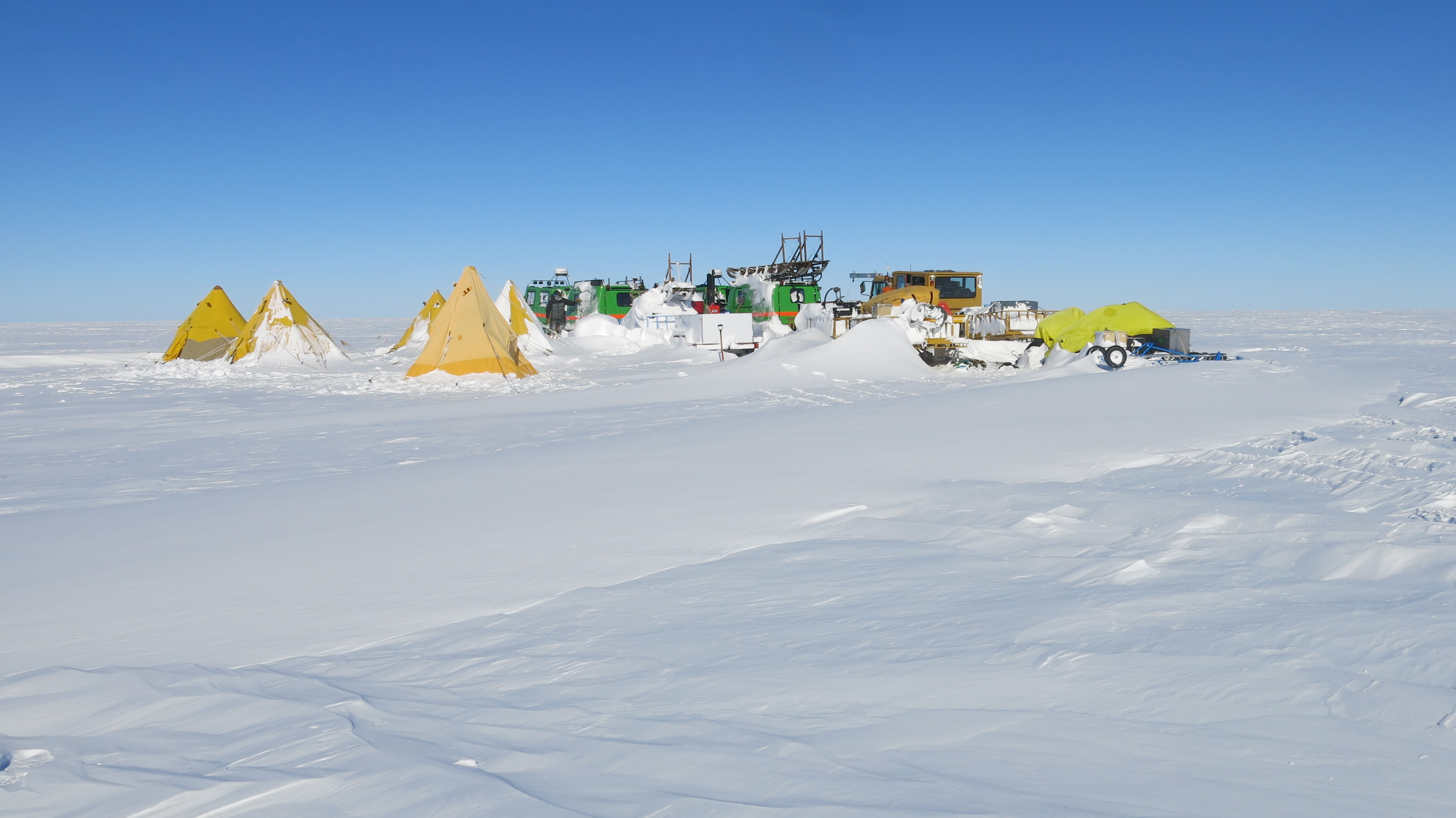 Over-nighting on the road from Scott Base to the research station, during the blizzard. Can we guess which way the wind was blowing?

“The big story about this season is that we had worked out very carefully where we would base ourselves–a location that would meet research needs for oceanographers, paleoclimate scientists, glaciologists, and atmospheric researchers–but we had no way of knowing until we got there whether our analysis would deliver the right site for stage one of our four year research programme.” (Stage two is to do it all again at another, more distant, site.) “As soon as we set up camp the geologists got to work using the Otago-built “thumper” to image the sea floor beneath the floating ice shelf. It was a bit tense that first day. If the sea floor conditions were not right, we’d have to move—but we couldn’t move too far. It was a bit of a competition among goals to find the best place for everybody … but we found that our ‘X’ on the map was in the right place and we now have an excellent spot to return to for a series of projects.” 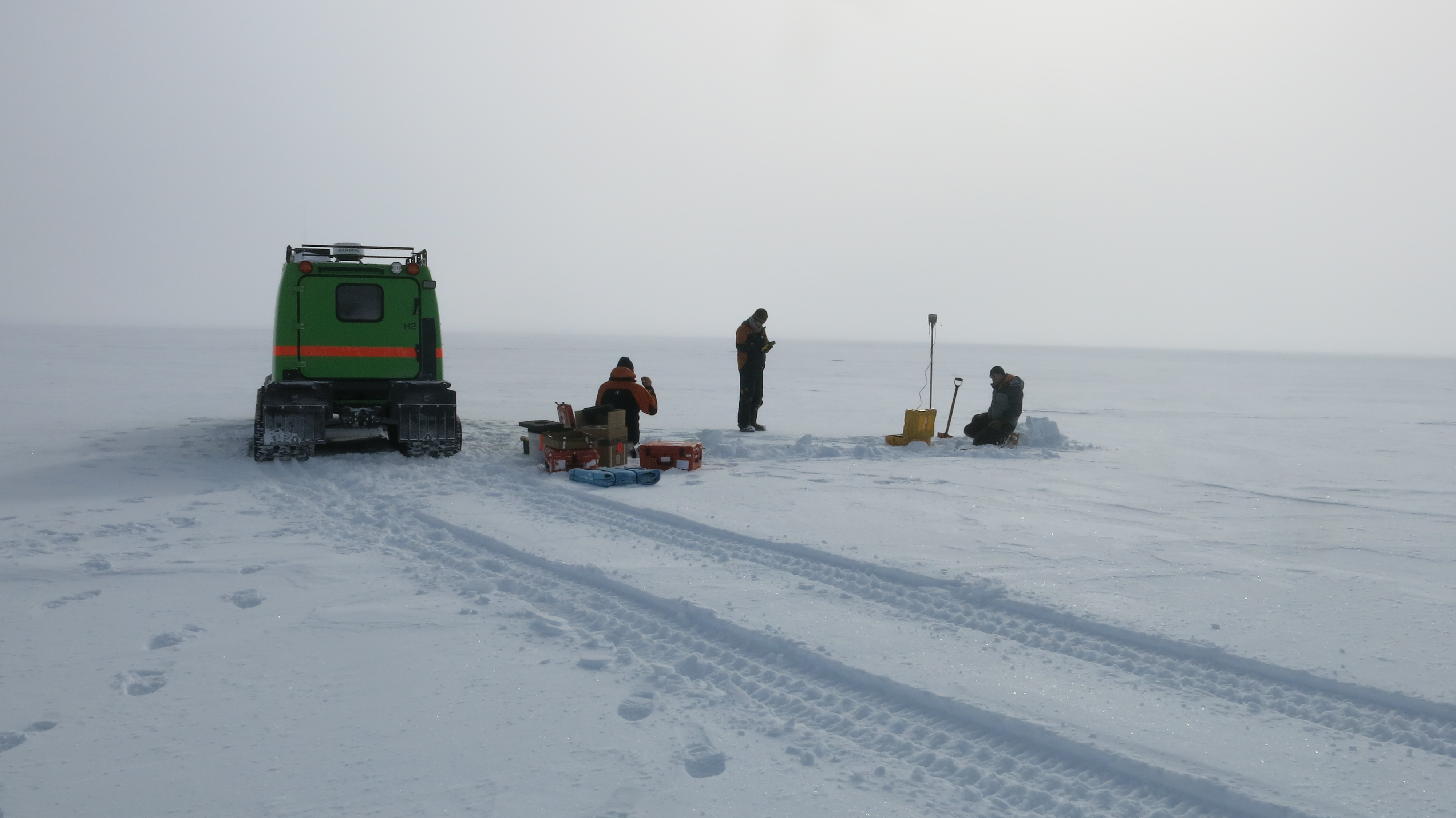 The team stopped every 25km along the 350 km journey, to put data loggers in place. In November when they return the scientists will retrieve the data and find out about movements in the ice.

The thumper is an energy source for seismic sounding. When it hits the snow surface, sound waves travel outward, are reflected by boundaries like the ocean/sea floor interface, and return to the surface where they are recorded by devices called geophones. As the thumps are recorded, a picture of the materials below the surface emerges–whether or not sediment even exists on the sea floor, and if it’s there, what its layers are like. Other technologies were used at the camp and along the traverse. The team from Surveying set up continuous recording GNSS (GPS plus other satellite positioning systems) stations and seismometers that will deliver information on short time scale movements within the ice shelf, and allow Hulbe and her colleagues Robert Odolinski and Adam Campbell to study the elasticity of the ice. The atmospheric researchers from Canterbury are interested in the weather systems that leave new snow on the surface. They set up an automatic weather station, used a small coring device to sample snow layers going back 20 years or so, and towed radar system around the area to map those layers around the research site. They also used another radar to image internal layers—when they return to the same spots and repeat the measurement next year, they will be able to tell if the base of the ice shelf is melting. That measurement has never been made before. Hulbe’s team used a yet another radar to look at the underside of the ice shelf. 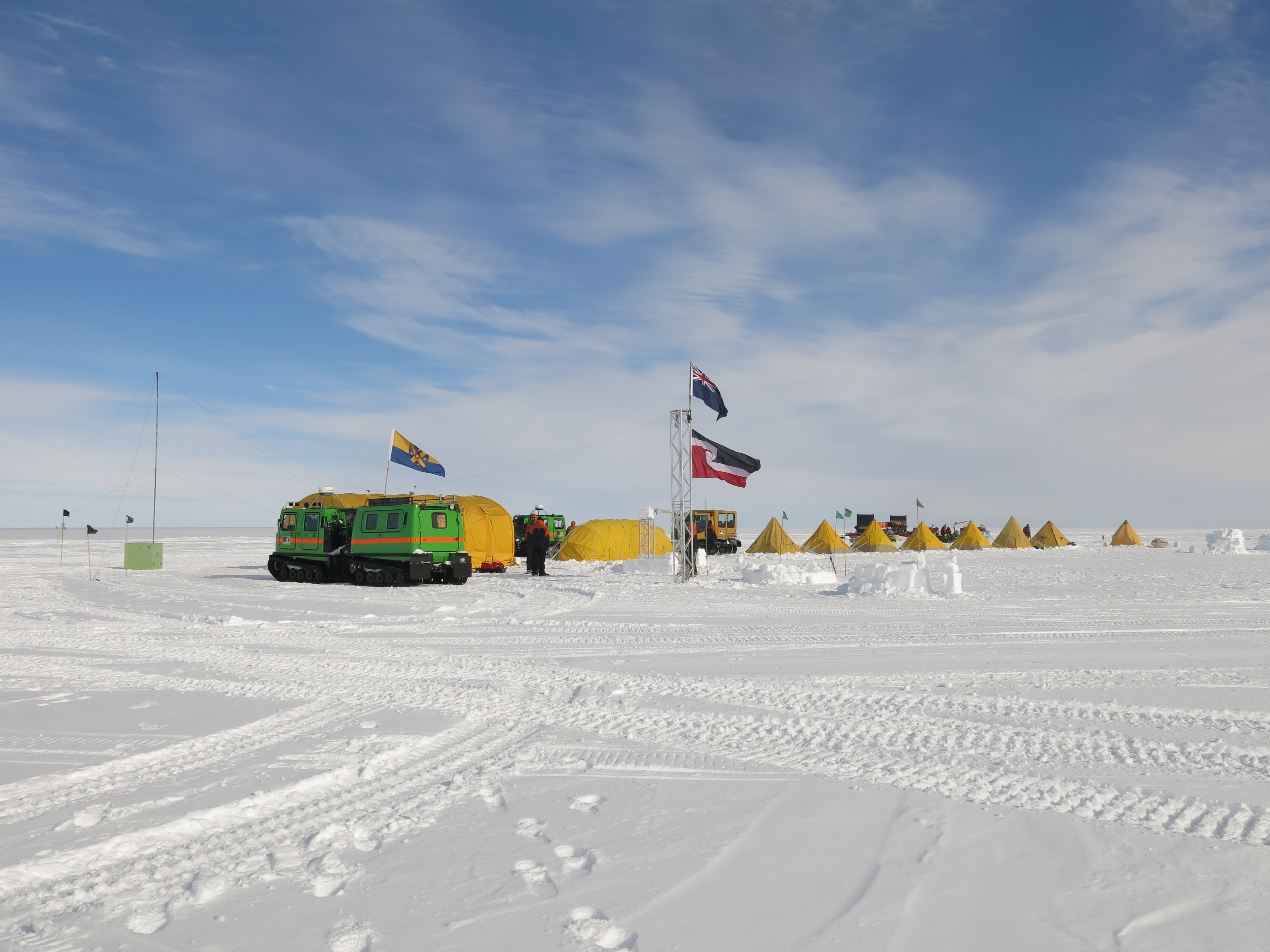 The research base which will be used every year for the four year project. There was a lot of excitement when the big tent (behind the vehicles) arrived, meaning that the team could cook and eat inside.

“We didn’t have time to complete all of the data gathering we’d hoped for this time round, but we will go back at the end of 2016, collect the weather station data, revisit the existing radar sites, and hopefully finish the ice-imaging radar work. We already have plenty to work on for this year, and the project site (at 80.67 S, 174.67 E) is going to deliver a lot of information for a lot of different projects over the next four years!”

The Otago team took a University of Otago flag as well as a Tino Rangitiratanga flag and a New Zealand flag, all of which flew proudly at the new research station. 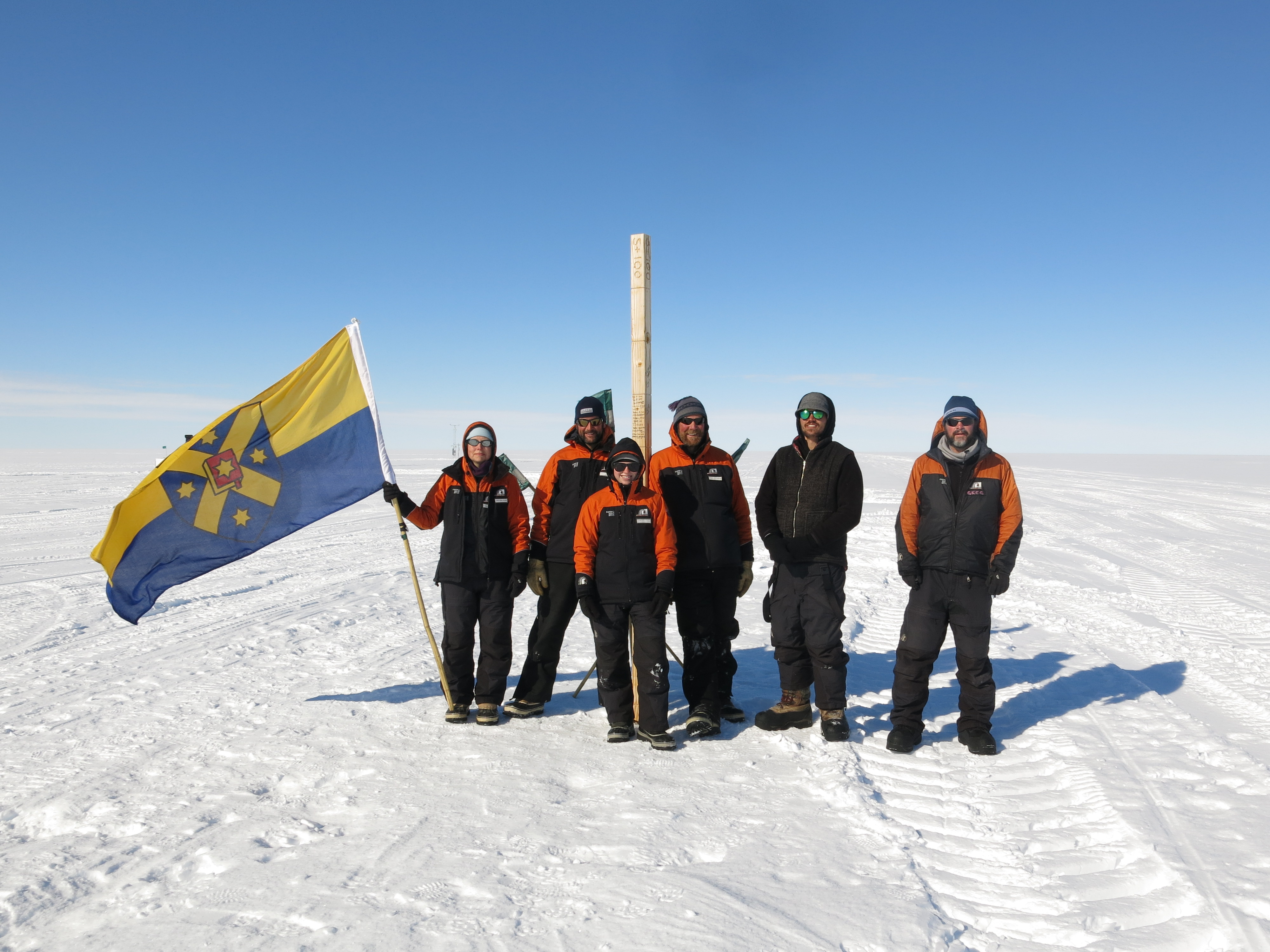